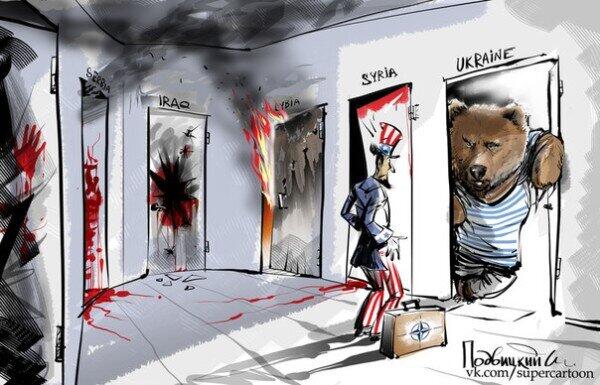 (left, the bully meets someone his own size.)

"No one is more of a slave than one who thinks himself free when he is not." - Goethe


The Ukrainian crisis reveals
political freedom in the West
is a ruse.


In Brussels Wednesday, Obama warned that Russia can't "run roughshod over its neighbors" and no amount of Russian propaganda "can make a wrong right." Our leaders are delusional. This is a recipe for nuclear war.


What do the invasions of Iraq and Afghanistan, the "civil war" in Syria and the "popular uprisings" in Libya and Ukraine have in common?

They were all instigated and financed by the US and EU  who are sock puppets of the Masonic Jewish central banking cartel. They were designed to remove governments not sufficiently subservient to this cartel that is behind the New World Order.

Putin is quite able to read the tea leaves. He is next for a "popular uprising."  The Neo Cons are openly calling for "regime change" in Moscow. Putin has interfered with their occult imperialism.

Although Russia says it has no designs on Eastern Ukraine, the press has menacing stories of Russia massing troops on the Ukrainian border.  Hilary Clinton compares Putin to Hitler. In Brussels Wednesday, Obama warned that Russia can't "run roughshod over its neighbors" and no amount of Russian propaganda "can make a wrong right." Our leaders are delusional. This is a recipe for nuclear war.

In an interview with Charlie Rose, the Russia ambassador to the US,  Vitaly Churkin, reiterated Putin's position that "Russia is on the rise" and wishes to reclaim some of its former glory. Russia wants a relationship with the West based on equality. It will not accept "Junior status" as in Ukraine. By "Junior" status, he means the Masonic Jewish bankers and their criminal cronies rob the Ukrainian people blind.

The West is totally controlled by this Masonic Jewish banking cartel. The mainstream politicians and media, Left and Right, are condemning Russia. There is no acknowledgement that the coup in Kiev was illegal and that Russia was justified in annexing Crimea given the Masonic Jewish mafia's agenda. (See my "Satanists Take us to the Brink Again") 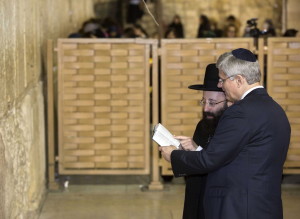 (At Western wall. Is Harper Jewish?)

Take my own country, Canada for example. The Prime Minister, Stephen Harper, is an errand boy for the NWO, a yapping poodle at Putin's heels. He warns that Canadian companies must be prepared to "feel pain" from retaliatory sanctions. But do we hear any criticism? No, the newspapers praise him: Harper is at his finest standing up to Russia!  The media is totally controlled by the bankers. Journalists are organ grinder monkeys who perform for their supper.

The same is true of the US, UK and Europe. Read about David Cameron for example.  Our political leaders are middle level employees and bum boys of the banking cartel.

The West is a zombie plantation. Right now the satanist bankers are busy killing and maiming children in Syria. The zombies are being diverted by a buoyant stock market.  But some day, when they're finished overcoming resistance abroad, they'll turn their attention to us.

If anyone needs a popular uprising to restore democracy, it's us. But, we have sports instead.

----
Makow Note: I am not sure if Putin has been cast in his role in order to instigate a world war, or whether he is sincere. I'd like to believe he is genuine. However videos like this suggest to me it's all one Illuminati club.

Paul Craig Roberts "How Much War Does Washington Want?"   This is an excellent article about political reality in Ukraine but
Roberts can't see that "Washington" belongs to the world banking cartel. No mention of Freemasons, Jews or conspiracy. Is Roberts a Freemason? 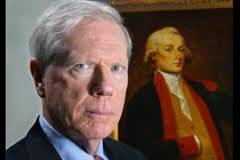 Is Roberts a Freemason? In my opinion - yes.
I'm glad you asked this question, I noticed the Washington portrait (with the classic masonic hand placement) he has behind him a while ago - a clear signal in my mind. Also, I can't imagine anyone who was once employed at the upper level of government and a published writer for mainstream media being anything but co-opted. Those with moral integrity are ignored or demonized.

The only time that these manufactured borders were re-imposed was under Lenin and Trotsky, Illuminati Jews who created the Soviet Union.
Note that during the Kievan RUS era, only 35-40% of northern "Ukraine" belonged to this country, while all of Belarus and much of European Russia made up the bulk of this country.

Also, a pseudo ethnicity was imposed on these western Russian peasants (along with Roman Catholicism) by the Jesuits. However, they failed to do so on everyone- that is why the people in the western most part of "Ukraine" call themselves Carpatho-Rus, as in Russian!

Further, genetic studies have shown that people from all three states have the SAME GENETICS- take that Neo-Nazis in the Rada!

"I am not sure if Putin has been cast in his role in order to instigate a world war, or whether he is sincere. I'd like to believe he is genuine."

I can't figure that part myself; not for sure. But ultimately, it doesn't matter. The 6th Seal of Apocalypse (Ch. 6: 12-17) will interrupt the conflict before it has gone very far, because otherwise Chapter 13 can't be fulfilled.

I think you hit the nail on the head and sent it through the board. Just a few comments:

There is no excuse for anyone in the West not to know the truth about the Ukraine with all the real journalism that is available on the web. Why any rational person would believe the Establishment Propaganda Mill in the era of free internet news is mind boggling. But the Zombies deserve what they get, and they will reap what they allow their leaders to sow in their name. May God help us (sincerely...He is our only hope!). If someone is building another Ark (like Noah did) save me a seat!

Russia is innocent. Crimea made its choice in the old fashioned... once upon a time... approved... US, Canadian, European way...by popular vote. How novel, considering the dirty elections that have occurred in the US. I believe Crimea had a better voter turn out than most recent US national elections ( and I wouldn't doubt that the same would be true for the EU nations as well). That Putin is looking heroic and rather statesmen-like shows us the utter (or gutter) depravity of the West and its leaders.

The West must want nuclear war with Russia. That has to be the plan. That is why they are building bunkers under airports and in Midwestern towns. The Zombies, like the ones in Noah's day will eat, drink, and be merry until it is too late. Unfortunately the rest of us will suffer as well.

I'm struggling to believe Putin is genuine. The Illuminati bankers have been doing this for decades. They have all the players they need to launch the new world order. Why would Putin be an exception and an opponent in their agenda? If he wasn't a controlled puppet they would have done away with him before he got this far in power. I believe this is all part of the plan to launch a world war so the antichrist comes in to achieve world peace thus achieving the twisted plan of the new world order. We are all being manipulated, yet we still try to look for a leader who is not evil (I'm not so sure one exists anymore) Putin fits the bill. They have a trick up their sleeve on the Russia situation. We live in a world where lies are spread as truth, sick is healthy, wrong is right, and the masses believe the delusion. Why are we all believing a Russian president is trustworthy and has the worlds best interest?! Why?! For all we know the Russians will come to the US to enforce the new world order and we all follow them because we think they are good Christians. I pray I'm wrong but I believe Putin was 'Put in' a power position purposely to further their agenda.

The Jew/New World Order is in decline. They have less power now than they had in 1980. China was the first to step off the plantation in 1987 followed by Russia in 2001. Now there are the BRICS along with a few others not on the plantation. The J/NWO are out of control and scrabbling to regain lost power. The J/NWO cannot regain China and Russia because those two countries remember how it is to be on the murderous plantation.

The J/NWO lust for world control driven by greed will result in their own demise. Greed and the lust for complete power has never ended well for those possessed by its illusion. We are witnessing the collapse of the J/NWO.

I saw a clip of Obama descending from his helicopter in the Rose Garden to announce economic sanctions against Russia. Now I read the EU is doing the same. The Dutch PM said something to the effect of, 'it will hurt us, but it will hurt them more than it will hurt us'.

I know that Russia is a major market for EU goods, so the EU is cutting it's nose off to spite Russia's face. I don't think they're strong enough to exchange economic body blows to Russia. They can squeeze Russia, but c'mon, remember Stalingrad? The fags and dykes now running Germany and the US think they can make Russia cry uncle by depriving them of toilet paper?

However, we must always reserve a grain of skepticism, for everything that happens on the world stage may be part of a script we can't see.

Many things about the events in Ukraine are strange to say the least. Is this not near-equal in magnitude with the Cuban missile crisis? If so, why is one missing airplane getting all the news coverage? A year ago there was no appetite for war with Iran, but now-Russia? Sure! bring it on...Henry we need to rid ourselves of the bankers soon, they are truly mad.

Western Democracy as we once knew it in Europe fell with the fall of the Berlin Wall in 1991.
America once rebuilt the countries it destroyed like Germany and helped them install a Capitalistic/ Democratic form of government free of Marxism and Fascism. However, the Marshall Plan is no longer in place and now we no longer rebuild the countries we have destroyed.
America and the EU have a NWO boss now and our new foreign is "air strikes" followed by the "looting of wealth" and then followed by "debt enslavement" to all countries left that refuse to forfeit their sovereignty as Nation States.
It's really sad the way Canada has gone with Harper. But, like Merkel, Cameron, and the rest of the EU leaders he has been put in line.

Western Democracy as we once knew it in Europe fell with the fall of the Berlin Wall in 1991.

America once rebuilt the countries it destroyed like Germany and helped them install a Capitalistic/ Democratic form of government free of Marxism and Fascism.

However, the Marshall Plan is no longer in place and now we no longer rebuild the countries we have destroyed.

America and the EU have a NWO boss now and our new foreign is "air strikes" followed by the "looting of wealth" and then followed by "debt enslavement" to all countries left that refuse to forfeit their sovereignty as Nation States.

It's really sad the way Canada has gone with Harper. But, like Merkel, Cameron, and the rest of the EU leaders he has been put in line.