Why Should Taxpayers Fund Illuminati Agenda? 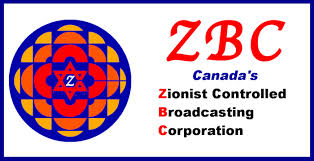 In spite of falling ratings, the Canadian Broadcasting Corporation continues to pursue a relentless left wing Illuminati agenda, and the "conservative" government does nothing to change this.
We get the same feminist propaganda line whether the Left or Right wing of the Illuminati is in power.


It is unacceptable that the CBC still receives over $1 billion a year from the Department of Canadian Heritage and continues to promote radical feminism, while refusing to cover conservative points of view.

Much ink has been spilled and many tears shed when CBC President, Hubert Lacroix, announced in April, 2014 that the CBC would be downsizing staff by 647 to plug a $130 million revenue shortfall this year.This shortfall was caused by the loss of the most important source of CBC's advertising revenue, that is, hockey broadcasting. The latter was picked up instead by the cable company, Rogers Communications, for $5.2 billion for 12 years.This loss was in addition to continued cuts by both the Liberal and Conservative governments over the years.

The CBC only has an 8% share of TV viewers in English speaking Canada. Without hockey broadcasting, even this minimal viewership is to be reduced by half.

Obviously, the CBC isn't providing programming that the viewers want. Mindless of this fact, the CBC, rather than trying to increase its audience, continues to relentlessly pursue programing slanted to a liberal or left-wing audience. It does so even though this is contrary to the 1991 Broadcasting Act, which provides, in section 3 (l) (i), that, "programing is to be varied and comprehensive providing a balance of information..." and, section 3 (l) (iv), that,"it provide a reasonable opportunity for the public to be exposed to the expression of differing views on matters of public concern...".

Albert Einstein defined insanity as doing the same thing over and over again and expecting different results. That exactly describes CBC programing.

A perfect example of the CBC idiocy in this regard is its sponsoring and providing laudatory coverage to "The Feminist Games", the annual Femmy Awards on March 8, 2014 (International Women's Day), which was held at the Library of Archives Canada. Other sponsors for this event included left- wing organizations, such as CUPE (Canadian Union of Public Employees) and the feminist organization, Match International.

The organizing committee for the awards included Amnesty International, which promotes abortion and homosexuality abroad, Oxfam Canada, which recently announced that women's issues were its priority, Inter Pares (an international left-wing feminist organization), Planned Parenthood Ottawa, the Canadian Federation of University Women, and the legal arm of the feminist movement, LEAF (Women's Legal Education and Action Fund). In short, this was a celebration to affirm the dying whimpers of the declining feminist ideology.

CBC anchor, Lucy van Oldenbarneveld, hosted the occasion celebrating those who contributed to "women's equality." When asked to cover the views of 16 pro-life picketers assembled outside the building, who wanted to bring public attention to the fact that abortions, based on gender, contravened women's equality, the CBC reporter covering the event, was not interested.

Past recipients of the Femmy were individuals from CUPE, Planned Parenthood Ottawa, Inter Pares, the federally funded feminist group CRIAW (Canadian Research Institute for the Advancement of Women), and CUPW (Canadian Union of Postal Workers.)
The Femmy Award website describes the 2014 recipients of the award as:

• A queer social worker, chair of EGALE Canada's transgender issues, who developed the gender identity inclusive policy for the AIDS Committee of Ottawa, was on the Board of Directors of the homosexual Pink Triangle Services, and worked with NDP MP Bill Siksay and Liberal Ontario MPP Yasir Naqvi on human rights and hate protection for transgender people.

• A queer-gender-non-conforming, anti-violence advocate who sat on the National Youth Advisory Board for Sexual Health and HIV, partnered with the Native Youth Sexual Health Network, who is currently project coordinator for "Preventing Gender-Based Violence on Campuses", is also a board member of the Queer Mafia, and is finishing up a social work degree at Carleton University.

• An organization called Holloback which opposes street harassment and is run by local activists, including Julie Lalonde, who was recently awarded a Governor General's Award in Commemoration of the Person's Case. She was the project manager for FAFIA (Feminist Alliance for International Action), which has received $1.8 million from Status of Women Canada.

Ms. Lalonde also represents Radical Handmaids, a pro- abortion group, which refers to its pro-life opponents as "haters." The group received generous CBC radio time on "OntarioToday" to target a group of medical doctors in Ottawa who, for medical and religious reasons, choose not to prescribe contraceptives, the morning after pill or refer patients for abortions.

Radical Handmaids questions the right of these physicians to continue to practice medicine.The Canadian Medical Association, however, doesn't agree with these feminist extremists, stating: "We don't expect them [physicians] to check their morals at the door, we recognize that they will continue to hold personal views."

It is unacceptable that the CBC still receives over $1 billion a year from the Department of Canadian Heritage and continues to promote radical feminism, while refusing to cover conservative points of view. Even on those rare occasions, when the CBC acknowledges the existence of a conservative perspective, it never fails to misrepresent it!

Taxpayers should not be forced to fund these extremist leftist advocates, who use taxpayers money to fund their own radical causes.
----

Comments for "Why Should Taxpayers Fund Illuminati Agenda?"

The very idea that we should expect a media outlet paid for by the government to expose any neferious conduct on behalf of the government is ridiculous. We had been taught somehow to love the CBC. I used to listen to it all the time until I learned. State controlled media must be propaganda, and it has been for a long time.

Obviously the rule of law and the judiciary in canada are a complete
sham if these gangs of raging lesbians can ride roughshod over the cbc
charter and get away with it with complete immunity.

I really do Worry about canada these days.
The answer is to switch off.

I don't see any of this nonsense ending any time soon, Henry. The CBC, along with multitudinous accomplices in the mainstream media, has effectively brainwashed most Canadians into a socialist, Illuminati mindset. This brainwashing has obviously taken decades, but it has taken deep roots into the psyche of the majority.

People need to turn their televisions sets off and awaken their minds again out of a long slumber.

One needs to ask oneself how, for instance, homosexuality has become accepted and celebrated openly with at least the tacit support of the average Canadian over the past twenty years. Without the power of television to deceive, I seriously doubt it would have been possible.

I should also mention Justin Trudeau's baffling edict that all Liberal M.P.s be compelled to support abortion (under the euphemism "woman's right to choose"...see how we've been subjugated through redefinitions?). This decree hardly raised any eyebrows across the land and Trudeau's poll numbers actually increased.

Society is in trouble, Henry. We all seem to be in a fugue state as we stumble toward self-destruction. The CBC, in particular, and television in general have put us into this mess and are keeping us there.

Hello Henry - thank you for your article on the 'Zionist' controlled Broadcasting Corporation. I'd just like to emphasize that CBC Radio is just as bad, if not worse than, CBC TV for shamelessly and tirelessly promoting a cultural Marxist agenda. Whether it's the truly creepy Sook-Yin Lee or the arrogant Bob McDonald with his science geek arrogance or the 'Eye-Opener', the CBC radio shills are thoroughly indoctrinated mouth pieces for the Ministry of Truth.

We can expect no less, however, with shameless Zionist shills like Stephen Harper and Jason Kenney running the show. The Harper govt has its head so far up Isra*hell's arse-hole, they can see Obama's feet...