Thailand Has Become a Police State 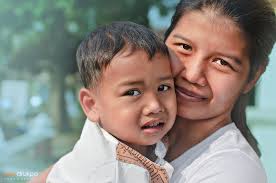 "Semper Castleton," an expat living in Thailand for more
than twenty years, reports on the power struggle between
NWO fronts and the military. Either way, the Thai people
will not gain the democracy they seek.

Three years ago, Castleton reported here "that
Thailand is now on the slippery slope to a police state."
His fears have been realized.


For the past few years, Thailand has been controlled by a coalition government based on the political machine left behind by Taksin Shinawatra , the deposed Prime Minister ousted by the 2006 military coup . This government has been fronted by his sister (some people say daughter) Yingluck Shinawatra. 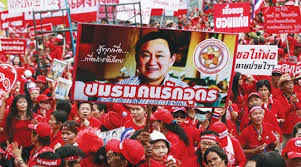 It has been a weak coalition. However, it has allowed Taksin Shinawatra to turn Thailand into a client state of the West. His violent red shirt supporters from the country's north had become stronger and stronger. Whilst witnessing that situation, the indigenous institutions have been far from happy . It was their turn to strike back.

Consequently, in May 2014 there was a swift and brutal coup d'etat. The Yingluck coalition government was busted by the Military.

Peoples were caught by surprise! Their emotions were mixed at that time.

This military takeover had the full blessing of the Monarchy.  Martial law was declared and the military took charge of everything. A few weeks later the TV stations were allowed to open and broadcast but under strict conditions. There was a different feel to air.

The limited resistance by Taksin supporters was quickly crushed. The leader of the coup was prompt to promise an early return to civilian rule and democratic elections by November 2014.

It never happened by that date and it prompted 'do gooders with agendas in Thailand' and businessmen in Europe and America, with allegiance to Shinawatra, to publicly condemn Thailand. Even the American Secretary of State made a strongly worded plea to the Military leaders to restore civilian rule as quickly as possible.   Such  condemnation was ignored by the military rulers.

The leader of the coup was blessed (again) by the Thai King . 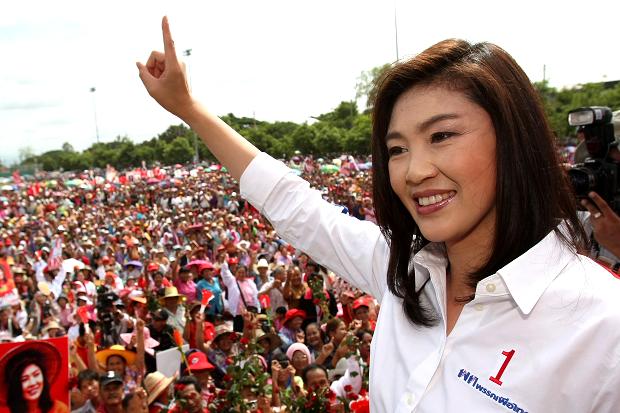 The Shinawatra family was dealt another blow in January 2015 when Yingluck, 47, was impeached for her part in the failed rice farmers program. She had allowed corruption to go unchecked. Many rice farmers had committed suicide because the government had not made the payments that were due to them.

Yingluck  stated that she was innocent. She even 'sourgraped" to her Facebook account much to the amusement of Thai people.  At the same time, members of her fallen government threatened  there would be violence on the streets, if she was impeached. Two days after her impeachment, a bomb went off in central Bangkok. No one was killed.

With her impeachment, Thai people hoped that finally the Shinawatra legacy and influence was over. But there was still some resistance left.

There was a crackdown and deportation of foreigners who had overstayed their visas. forrupt businessmen, police, administrators and bureaucrats have been removed. 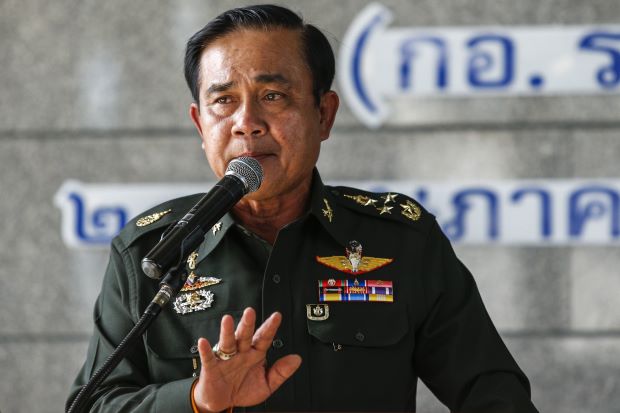 The leader of the military coup, Gen Prayuth Chan-ocha, left, declared himself to be interim prime minister. More thanks and blessings were offered by the Royal Family.

An impeccably dressed man presents himself to the people on state television every Thursday evening, saying that everything in the country is progressing as planned. He also has urged all schoolchildren to participate in the future "12 degrees of Thai-ness " program. Apparently, he gavies the same message but wears a different suit every week.

Who has benefited from the military takeover? The writer would suggest that it's only the coup leaders.

Everything is fine in Thailand but it is still under military rule without any prospect of a return to civilian government. Moreover and unbeknown to many Thai people, there is still the threat of continuing disruption by the Shinawatra supporters based outside Thailand.

This threat means that any return to civilian government is unlikely. Where has this been seen before?

It's very much business as usual on the surface . The country is enjoying cheap oil prices. Sadly, the tourist industry has suffered due to the demonstrations and political turmoil.  Thai schools are also having trouble getting foreign teachers since now they must meet visa and other requirements.

The cost of living has risen considerably. Like other countries, the gap between the very rich and the working class has widened. There are fewer vendors on the streets of Bangkok due to a cleanup.

In the interests of "security," all locals and foreigners holding unregistered telephone prepaid simcards have been forced to register them with the three major telephone companies or face a fine. There have been many other impositions that have alarmed the people.

Fear of the military abounds. Post-coup life has not been as 'sabai sabai ' (all smiles) as anticipated.  The militarization of the already powerful media has intensified social control. Social hierarchy has not changed.

Thailand is not so far behind the same agenda marketed by David Cameron's Gulag (UK) and other western nations as it heads towards a 'Hunger Games scenario'. The police state is here in Thailand. There is Anxiety in Paradise.

The Thailand article convincingly portrays what was wrong with the Shinawatra gang. But it implies that the coup is equally bad. One very important basic fact about Thailand is that it is the only Southeast Asian country never under colonial rule. They obviously want to keep it that way. Visa requirements keep out terrorists and spies. Teachers should not poison the minds of the young. Democracy can be subverted by NGOs and turned into coups. I would give the Thai military and monarchy the benefit of the doubt. They don't need a Color Revolution of the familiar Soros pattern to put them under colonial rule for the first time.

Comments for "Thailand Has Become a Police State "

I have been living here since 1987. Apart from the law on lese majeste I have found that I can express any opinion that would land me in jail in Europe or Canada under the so - called hate speech or holocaust denial laws. One can also make ethnic jokes with any fear of censure in the name of political correctness. Of course there are Western educated ecaudal simians that are desirous of turning Thailand into a monkey's paradise like the US or the UK. Most of my Thai friends are glad of the peace that has ensued since the coup. Some of my friends, including my Thai wife express sympathy for Yingluck, but unless there is massive subversion from abroad witness the Ukraine,then I foresee no change.

The older Spaniards and Portuguese I have spoken to long for the days of Franco and Salazar. In those days wine was cheaper than coca-cola and there was employment. These countries were masters in their own houses. Now they are running dogs of the international banks!

Castleton provides a rather provincial perspective in that the entire world is gripped by an international fascist dictatorship.

Everything he says about Thailand is true of Canada, USA and the rest of technologically advanced world.

"Under the relentless thrust of accelerating over-population and increasing over-organization, and by means of ever more effective methods of mind-manipulation, the democracies will change their nature; the quaint old formsâ€”elections, parliaments, Supreme Courts and all the restâ€”will remain. The underlying substance will be a new kind of non-violent totalitarianism. All the traditional names, all the hallowed slogans will remain exactly what they were in the good old days. Democracy and freedom will be the theme of every broadcast and editorialâ€”but Democracy and freedom in a strictly Pickwickian (naive) sense. Meanwhile the ruling oligarchy and its highly trained elite of soldiers, policemen, thought-manufacturers and mind-manipulators will quietly run the show as they see fit.â€

When at SMU in the 1960s I marveled at how NAZIS took control of Germany in 1930s; thought that could never happen in America.

Now America is a police state and must admit I almost did not notice.

What does this doubling down on totalitarian control in Thailand do to it's stock in trade, the sex tourism industry? Well, according to a documentary I stumbled across, not a whole lot, but drugs are a big no-no. If you're a tourist who is stupid enough to make a blunder buying or selling, you could quite easily disappear and never be seen or heard from again.