Apparently the FBI was live streaming
a parallel "militia encampment" in Burns Oregon.
At 1.20 min, the  "patriots" are asked
to sign talent releases.
If someone understands what this is all about,
please inform us!
by James Farganne
(henrymakow.com)
In the pre-dawn hours of January 27, a wispy-bearded 20-something calling himself David began a series of live stream Youtube broadcasts from the Oregon standoff scene.
Ammon Bundy and other core members had been arrested that day. LaVoy Finicum had been shot dead. David claimed to number among the last remaining patriots occupying the federal sanctuary. As he and others repeated over and over, the "pussies" had all fled home.
The banter was rife with profanity. David and company chain-smoked cigarettes while vociferously professing their Christian faith and values.
With manic bravado, David gloated about his impending death. He broke into cockeyed, wing-nut "Christian Identity"-esque rants about "the false Jews" and "the true Israelites".
Something was wrong with this picture. I grew up in a Christian family in the Western United States. I grew up among noble and sober men who taught me how to comport myself with guns. The men in these live stream broadcasts were nothing like the sort that would face imminent violent death in the name of ideals. They struck me instead as posers. Ignorant, erratic, schizoid clowns. Look at 1.20 min. mark to see what I mean.
This was supposedly a tactical theater, where death could come at any moment. Yet there was nothing of the sobriety, the solemnity, that you would expect of serious, seasoned men in such a situation. None of the precision or economy of speech. Just swaggering "yeehaw" ejaculations about "muh Constitutional RIGHTS!" and exhortations to die martyrs.
I knew they had to be actors, but I needed proof. So I sat through over three hours of this nonsense. It grew more and more absurd. David and company deployed to a standoff location and cut the lights. For long periods, there was nothing but audio: more of the same hokey banter. They talked about the presence of nearby Delta Forces, which they couldn't possibly have known.
As dawn approached, they began issuing direct threats of lethal violence against federal agents. One of them even promised to "hunt down" any surviving agents "after this is all over".
Real patriots, in a real standoff situation, issuing threats like that into a broadcast device? Never.
I must mention that frequently throughout this 3-hour period, the live stream would freeze, and David would start a new one. The old one, whatever its duration, would appear on the Youtube channel's video list.
When the proof finally came, someone rushed over to the camera to cut the live stream. Nonetheless, the live stream footage is still online.
What happened was this. At sunrise, as the "militia members" smoked cigarettes and hocked loogies in silence, someone entered the set and requested that these guys all sign "Talent Releases". He asked three times before one of them rushed over to the camera to turn it off.
Here is but one of many examples you can find of a Talent Release Form
Here is the video capture:  https://www.youtube.com/watch?v=rXJgk6wr9D4
Here is the Youtube channel of the psy-op, where the live stream videos can be viewed (all, that is, but one): https://www.youtube.com/user/DefendYourBase
It's infuriating what they are doing, vandalizing the image of the Christian patriot. I don't have any comprehensive take on the standoff saga as a whole, but I know for sure that the so-called "patriots" are now bungling actors. These disgusting cockroaches must be exposed.
P.S. It seems career crisis actor Victoria Munoz has now made an appearance in Oregon as well.
----
Also by James Farganne on this site- The Argument Fukishima was Sabotaged
Related - FBI Posing as Militia
-----------FBI Video of Shooting of Robert Finicum
---------------- Oregon Standoff Continues - Live Updates
----------------- Veterans Today Debate the Killing of Finicum
------------------ Stefan Molyneaux -Where's the Outrage?
Tim writes:
I watched the videos attached to your posting regarding the crisis actor Victoria Munoz. You won't believe what I saw on a CBC Twitter article! I believe it's the same woman at a public service union rally. see below 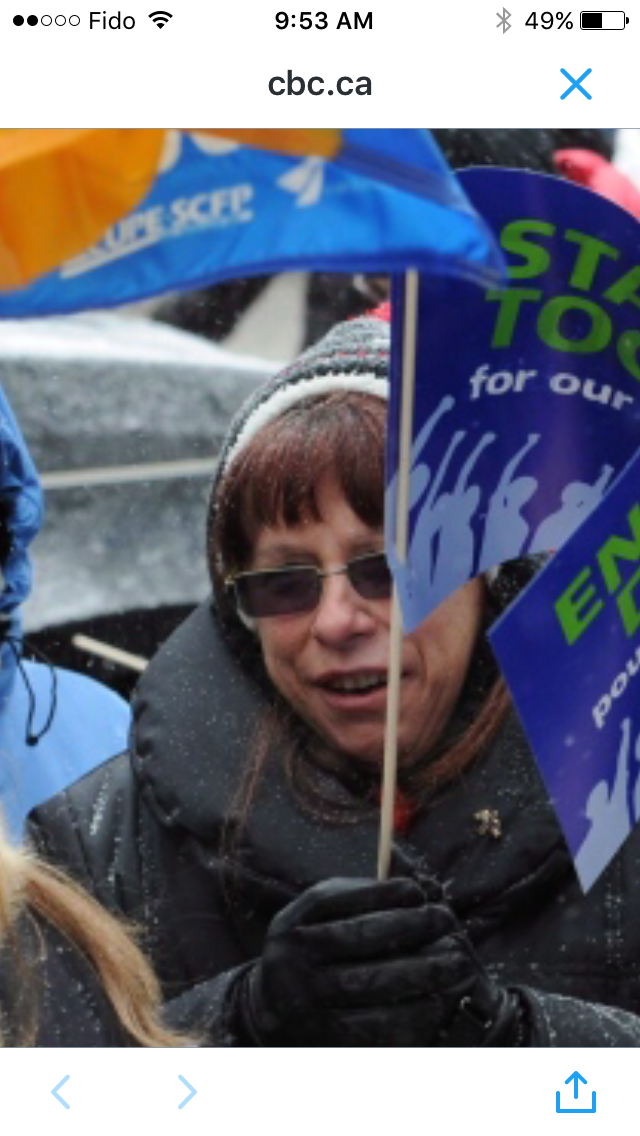 If you look closely, you'll see that the "Victoria Munoz?" of Sandy Hook has a nose that deviates to her left. Her upper lip is stiff and not flaccid and it is not very thin. The lady in OR has a straight-on nose and her lips are thin. I don't know about her voice, b/c it seems to me he only tested her against the Albuquerque "V.M." Could Miss Oregon have aged that much from Sandy Hook? The Colombian Victoria Munoz has straight teeth. Not so the Sandy Hook lady.
I think these guys are trying too hard.

Farganne is correct re Oregon, still not sure re Finnicum makes him look stupid like he can't comprehend reality or is a part of the theater to criminalize Christians, loft felon LDS preeminent. Just so you are aware, that's reform triptych.

FBI and DOJ are very much involved Obsidian Analysis/SRA International theatrical debauchery. Apparently Farganne remains unaware or is unwilling to acknowledge the latter. Good eye for detail, but to be skeptical under the circumstances is dangerous.

Every credible narrative lending itself to reality for these monsters vamps the public and keeps their game going. We know what they are capable of. We know what they do. Play this off righteous and these demons feast unchecked by reality.

Re previous email, I have personally experienced Scottish Rite/LDS recruitment to "alternative" child sacrifice as an educator, and contrary to people alleging these horrific circumstances and having no proof, I documented this in San Bernardino a full 6 months 1988-89.

They were human trafficking to tap federal funds with a head count manufactured from coerced placements the victims of which were culled from regular education classrooms. The net effect on the student in such circumstances is attrition blood atonement. District controlled the official records with substantial collusion between city attorney prosecutors and judges. I freed three students from these circumstances.

In the immediately forgoing narrative, the perp administrator was Melchizedek, Arlan Anderson, now administrator at Katherine Finchy Elementary School in Palm Springs and 247 cohort on the Sylvia Marie Flores abduction/slaying.

I encourage anyone who has even a cursory forensic interest in how they pull these horrific crimes off to become familiar with SLC MAG encryption on the Flores slaying. It's a simple dot to dot Finchy to the Redlands LDS temple lodge and which terminates on Almond avenue where Flores was placed after she was killed.

I was attacked last Saturday by what I believe to have been a 247 Sabra raptor. He was armed with a knife and threatened to stab me which he didn't follow through on to avoid getting hurt himself.

Screw Finnicum. LDS are attempting to use him to correct the damage that's been done re Holloway/Gardner having made it to a public platform re Thomas Monson involvement in SKIRTS black mass which is typical of LDS elite (see Potts/David O. McKay and others).

For the record, and I have said this before, Jimmy Fallon is the son of H.B. Hinckley. How the hell this information does not alert the public is beyond belief. There are others, the more notorious to be considered Will Smith and Sabra Elise Johnson cloned from Cheri Jo Bates.

I have been watching this event unfold with great interest. I never believed what these folks did was a particularly wise move. I always had a feeling it would end badly. I have believed from the start it is filled with cointel agents. This is not to say I believe Ammon, Ryan and LaVoy were not sincere in their convictions to point out to America the land theft that is being perpetrated on Americans by the criminal elites in Washington.

We have all heard how Hillary(only on the face of the earth at this time as Satan kicked her out of Hell)has made a deal with a Russian mining company for the mineral rites of the very land the Hammonds own. In order for this to occur, the Hammonds and other ranchers in the area must go. It is only a fool who does not believe our federal government and the crooks who run it will stop short of nothing, and I mean NOTHING to see that this happens as their pockets are filled with dirty, filthy bribe money. If people cannot see what is happening right before their very eye's then I guess they deserve what they get.

With LaVoy dead, murdered by devil's henchmen and Ammon and Ryan now in jail it is clear Big Brother has put an end to the true resistance. All that is left are the cointel pukes who are praying to their God Satan for another Waco. If you are a true patriot and still hanging around the "compound" you had better wise up, and get the hell out before they DO Waco your ass. Wake up friends, there is a better way, and we must find it. Please do not allow these cointel rats to get you killed as they sneak out the back door.

Many heart felt thanks to the true patriots who were simply trying to make a difference, and will now pay for the rest of their lives. Ammon and Ryan will probably never see the light of day, and not one word from them will the criminals ever allow us to hear. LaVoy, you were a TRUE American patriot in the mold of the ones who fought and died against England to get this whole thing started. You are a HERO. Many thanks to you and may God bless your family.