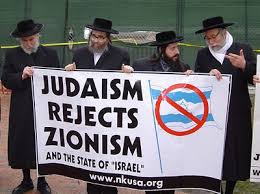 Zionism is an instrument of the Rothschild plan for

the West and threatens the East. Millions of Jews

have died for this demented plot. A few, True

and try to warn their fellow Jews.  They put the interests

of their country of residence first.

"Zionism is but an incident of a far reaching plan," said leading American Zionist Louis Marshall, counsel for bankers Kuhn Loeb in 1917. "It is merely a convenient peg on which to hang a powerful weapon." *

Nazi Propaganda was Based on What Zionists Said

We implore and beseech our Jewish brethren to realize that the Zionists are not the saviors of the Jewish People and guarantors of their safety, but rather the instigators and original cause of Jewish suffering in the Holy Land and worldwide. The idea that Zionism and the State of "Israel" is the protector of Jews is probably the greatest hoax ever perpetrated on the Jewish People. Indeed, where else since 1945 have Jews been in such physical danger as in the Zionist state?

Jews are enjoined by their religious laws to be loyal to the country of which they are citizens. Ever since the destruction of the holy Temple in Jerusalem and the exile of the Jewish People some two thousand years ago, we have been enjoined to be scrupulously loyal to the countries we reside in. One of the great biblical prophets, Jeremiah, in chapter 29:7,"Seek out the welfare of the city to which I have exiled you and pray for it to the Almighty, for through its welfare will you have welfare." This has been a cornerstone of Jewish morality throughout our history to this very day...

It has been the age-old intention of Zionism to intentionally stir up anti-Semitism anywhere possible, and even more commonly, to take advantage of any Jewish suffering anywhere in order to enhance its cause. Indeed, hatred of Jews and Jewish suffering is the oxygen of the Zionist movement, and from the very beginning has been to deliberately incite hatred of the Jew and then, in feigned horror, use it to justify the existence of the Zionist state - this is, of course, Machiavellianism raised to the highest degree. Thus, the Zionists thrive on hatred and suffering of Jews, and seek to benefit thereby through keeping Jews in perpetual fear, causing them to ignore the true nature of Zionism, and instead to consider the Zionist state is their salvation.

Hateful views of Jews as being subhuman did not have to be invented by Nazi theorists such as Hitler, Goebbels, Rosenberg and Streicher. This ideology was simply adapted from statements of political Zionists such as those found in the writings of the Zionist Yehezkel Kaufman in 1933. 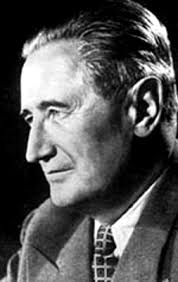 In 1920 there were statements hostile to Jews expressed at Heidelberg University. These statements, arguing that Jews of Germany had caused the turmoil that followed the war; that the Jews of Germany had nothing in common with Germans, and that Germans had the right to prevent the Jews of Germany from intruding into the affairs of their volk were not made by Adolf Hitler in Mein Kampf, but by Nahum Goldmann, who went in to become the President of the World Zionist Organization and head of the World Jewish Congress, and, indisputably, the most influential political Zionist in the world, second only to the Prime Minister of the State of Israel.

In 1921, Germans in Germany were told that:  "We Jews are aliens... a foreign people in your midst and we... wish to stay that way. A Jew can never be a loyal German; whoever calls the foreign land his Fatherland is a traitor to the Jewish people".

Who spoke these vile words? It was Jacob Klatzkin, the second of two political Zionist ideologists in Germany at the time, where the Jews of Germany were enjoying full political and civil rights. It was he who had advocated undermining Jewish communities as the one certain way of acquiring a state. "They had no qualms concerning tearing down the existing Jewish communities."

Who spoke in a public address at a political Zionist meeting in Berlin and declared that "Germany... has too many Jews"? Was it Hitler or Goebbels? No, it was Chaim Weizman, later to become the first President of the State of Israel. This address was published in 1920, and, thus, four years before Hitler had even written Mein Kampf.

SACRIFICED OTHER JEWS TO NAZIS

There is a huge amount of literature describing how the Zionists made it very difficult to save Jews during and after World War II. As various individuals and organizations were trying to arrange departures of Jews to western countries, the Zionists worked overtime to prevent this from happening. 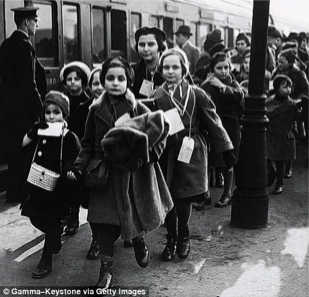 They expressed the opinion that building up the Jewish population of Palestine was more important than enabling Jews to go to third countries, and they insisted to western powers that Jews should not be accepted anywhere other than Palestine. Indeed, Yitzhak Gruenbaum, a famous Zionist, proclaimed that "one cow in Palestine was worth more than all the Jews in Poland." The infamous David Ben-Gurion said in 1938: "If I knew it was possible to save all the children in Germany by taking them to England, and only half of the children by taking them to Eretz Israel, I would choose the second solution. For we must take into account not only the lives of these children but also the history of the people of Israel."

After the war, a Zionist "religious" leader, Rabbi Klaussner, who was in charge of displaced persons presented a report before the Jewish American Conference on May 2nd, 1948 : "I am convinced people must be forced to go to Palestine...For them, an American dollar appears as the highest of goals. By the word "force", I am suggesting a programme. It served for the evacuation of the Jews in Poland, and in the history of the 'Exodus'... To apply this programme we must, instead of providing 'displaced persons' with comfort, create the greatest possible discomfort for them...At a second stage, a procedure calling upon the Haganah to harass the Jews."

It is ironic that the Zionists proclaim their State as the safe haven for the Jewish People, when since World War II no place on earth has been as dangerous for Jews, both spiritually and physically, as the Zionist state.

I am really confused now. I looked up on the truetorahjews website for insight as to understand if they identify in any other way and got this:

In my mind, especially from Mark 7, I believe, you can't be both "Torah" and "Talmud." Is this another fake?

A lot of Jews are ignorant of the hateful quality of the Talmud. What they say about Zionism is nonetheless valid.

Non-Jewish people might as well save their breath and keep their opinions on Zionism and the state of Israel to themselves. Whatever they say, it will be called anti-Semitic.

A perfect example of this can be seen in the BBC talk show segment.

They're having a nonsense argument over which political party is more anti-Semitic. A student in a kippa says the Torah, Koran, and Christian old testament say 'Israel is for the Jews'! Muslim: "you should get rid of the Christian Zionistsl"
An old Jew bursts out, "your supporters are anti-Semites! The far right supports Israel but they hate Jews!" Student retorts, "Why is it not alright for the Jewish People to have a homeland?" Old crank, "Because Jews are members of every nation! not just one nation! We're not a nation, we're a religion!" Student, "We ARE a nation!" Old Jew, "You're an anti-Semite!"

I won't even try to wade in on a conversation like that. I think non-Jews should focus on our own nations, which need a our attention right now.

The British public has only one issue they can do anything about this summer, and that is the BREXIT referendum July 23rd.

The Orthodox Jews had originally opposed the Theodore Herzl plan for International Zionism that would reestablish the Jews back into the Holy Land.

They rightfully claimed that if it were not by the hand of God to lead them back than it was not meant to be. The corporate/political Israel that exists today bears witness to this prophesy.

This present recreated Zionist manufactured state of Modern Day Israel in the end will not be to the Jews sovereign political advantage.
Prior to this politically implemented movement called Zionism the Jew's identity was that of a people and not as a worldly nation.

Along with this worldly nation will come accountability and responsibility which will no longer give the Jews the luxury of being anonymous or a perennial victim of circumstances thereby bearing no fault or negligence as they once did when they resided in the nations.

You can't force the hand of God and the future of Modern Day Israel will prove this to be true.