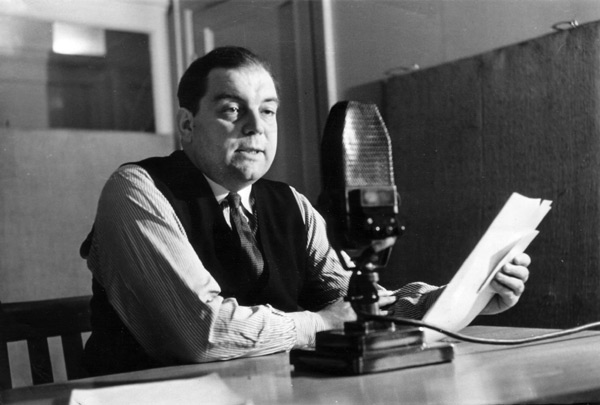 ("I gazed into the mirror... There, staring at me, was the pallid, flabby-mouthed face of a crook" Sefton Delmer, Black Boomerang, p. 218)
Wartime British black propaganda chief Sefton Delmer (1904-1979) told a new recruit: "We are waging against Hitler a kind of total war of wits. Anything goes, so long as it serves to bring nearer the end of the war and Hitler's defeat. We are up to all the dirty tricks we can devise. No holes are barred. The dirtier the better. Lies treachery, everything." (Black Boomerang, p. 181)
Sefton Delmer was in charge of a unit that impersonated Nazi radio stations and broadcast demoralizing information to the German people. He had permission to invent atrocities, yet he didn't mention the Jewish holocaust. Why not?
From Sept 5, 1017
Allied Atrocity Propaganda During World War Two
by Udo Walendy
(Excerpt by henrymakow.com)
Sefton Delmer was among the men "who were given the opportunity in 1945 of making changes in Germany"  What these intended changes looked like, the German constitutional lawyer Prof. Friedrich Grimm depicts in his book 'Political Justice' (pp. 146-148):
In May 1945, a few days after the collapse, I had a notable talk with an important representative of the opposite side. He introduced himself as a university professor of his country, who wanted to converse with me on the historical basis of the war. Suddenly he dropped the subject, pointed to the leaflets lying on the table in front of me, we were flooded with during the first days after surrender, mainly circling around the concentration camp-horrors. "What do you say about it?" so he asked me.
I replied: 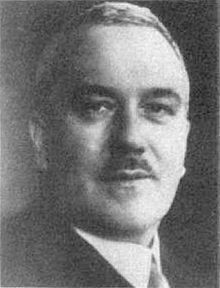 (left, Friedrich Grimm)
"Oradour and Buchenwald? With me, you force an open door. I am a lawyer and condemn the wrong wherever I meet with it, more than all, when it happens on our side. I know, however, to make a distinction between the facts and the political use one makes of it. I know the meaning of atrocity propaganda. After World War I, I have read all publications by your experts on this subject, the writings of the Northcliff Bureau, the book of the French minister of the finances Klotz 'From War to Peace' (Paris, 1923), depicting how the story of the chopped-off children's hands was cooked up and what profit one got out of it, the enlightenment writings of the journal Crapouillot comparing the atrocity propaganda of 1870 with that of 1914-1918, and finally the classic by Ponsonby: 'The Lie in War' [Falsehood in Wartime], revealing that one had in the preceding war already magazines showing artificial corpse mountains by photomontage composed of dummies. These pictures were distributed, with a space left for caption. It was given out by telephone later on according to the needs from the propaganda centre."
Thereby I pulled out one of the leaflets exhibiting allegedly mountains of dead bodies out of the concentration camps, and showed it to my visitor, who looked at me taken aback.
I continued:
"I can not imagine that in this war with all weapons perfected to such an extent, this mentally toxic weapon should have been neglected that decided the outcome of World War I. More so, I know it for sure! The last months before the collapse I read daily the foreign press. There was reported on German atrocities from a central office, operating in a certain turn. There was one occupied territory after the other called to mind, today France, tomorrow Norway, then Belgium, Denmark, Holland, Greece, Yugoslavia and Czecho-Slovakia. 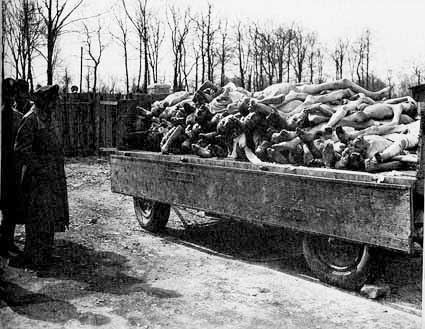 "First were reported hundreds of corpses in the concentration camps, then six weeks later when it was the turn of this same country again, thousands, then ten thousand, then hundred thousands. Here I thought to myself: this number inflation cannot possibly skyrocket into the million!"
Now I reached for another leaflet: "Here you have the million!" There my visitor blurted out: "I see, I have run into an expert. Now I also want to tell you, who I am. I am not a university professor. I am of the central office you talked about: Atrocity propaganda - and with it we won the total victory."
I replied: "I know, and now you must stop it!"
He retorted: "No, now we shall start all the more! We shall continue this atrocity propaganda, we shall intensify it, until nobody shall accept a good word from the Germans anymore, until all the sympathy you had in other countries shall be destroyed, and until the Germans themselves shall be so confused that they do not know anymore what they are doing!"
I terminated the conversation: "Then you shall burden yourself with a great responsibility!"
What this man had threatened us with, came true. The worst, however, was the confusion caused among the Germans themselves.
Prof. Dr. Friedrich Grimm did not know the true identity of his interlocutor: It was Sefton Delmer!
------------
Makow Comment - This 1945 documentary about the liberation of Nazi concentration  camps was never aired apparently because the Allies didn't want to depress the German people any further. They needed them as Allies in the upcoming Cold War.  Clearly guilt is a weapon of psychological control. Is the average American responsible for secret atrocities committed by his government?