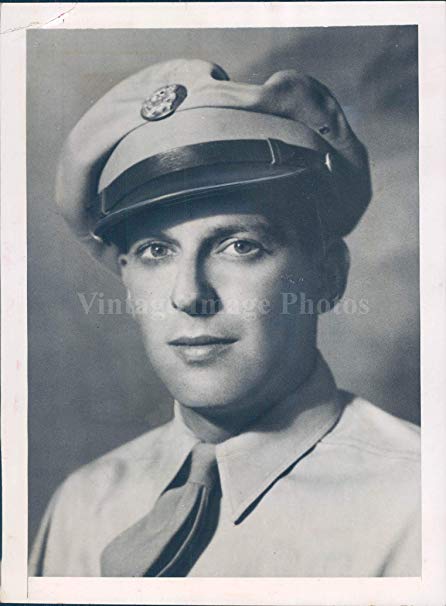 (Alfred Lilienthal, 1915-2008)
Alfred Lilienthal belongs to the ranks of courageous
Jewish pioneers who opposed the Jewish supremacist agenda.
Others include Myron Fagan, Benjamin Freedman, Elmer Berger,
& Henry Klein.
In the 1950s, Alfred Lilienthal warned that the U.S. is fighting Israel's wars to dominate a region. The US is not fighting for our freedom as the propaganda machine preaches.
by Michael Cangemi
(henrymakow.com)
October 6, 2019, marks the 11th anniversary of the passing of a truly great American, historian Alfred M. Lilienthal.
He was 94. As early as 1953, the graduate of Cornell University and Columbia Law School who yearly visited the Middle East stirred up no small displeasure with a Reader's Digest article, "Israel's Flag is Not Mine." After a negative sermon on the article was given in a New York synagogue, he was awakened by a rank, threatening phone call. "If you don't stop, we will have you killed. You are undoing everything we are struggling for...layoff what you are doing." 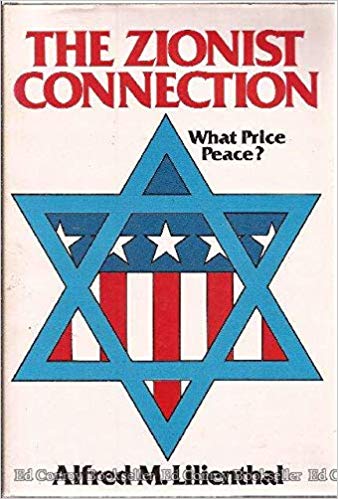 Heroically, he did not stop. Some friends and family shunned him while others quietly told him they agreed. In 2008, I chanced upon copies of two of his books: What Price Israel? (1953) and The Zionist Connection (1978).
I was pretty well informed but surprised I had not heard of the books or Alfred Lilienthal. The Zionist Connection's stark, white cover featured Israel's Star of David symbol superimposed (appropriately) over a section of Stars and Stripes. ( The Star of David is in fact an old occult symbol adopted by Zionist leaders for the new state and has no connection to biblical King David. )
The book's inside cover notes that the author " finds the meticulous organization of Zionism reaching into the White House, mobilizing public opinion, exercising control over Congress, repressing opposition through anti-Semitic labeling and exercising inordinate control over the media of information...endangering American national interests."
Before 1948 Lilienthal notes there was essentially no Jew-Arab conflict. Once the new state was established, Zionist leaders "set in motion a simultaneous flow of Jews into the country and Arabs from the country."
Quoting David Ben-Gurion, "Israel is the country of the Jews and only the Jews." Lilienthal called the displacement of the 1.3 million, Christian and Muslim  Arab population, a devastating abrogation of the western professed ideal of self-determination...this is the 'original sin' that underlies the entire Palestine conflict." 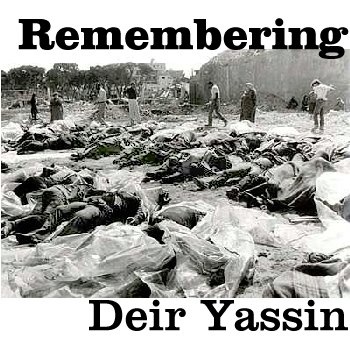 The Zionists employed psychological warfare and outright terrorism to drive out Palestinians and "expropriate their homes, lands and property." One of the most heinous examples was the massacre of the small Arab village of Deir Yassin, wherein a surprise attack, 250 old men, women and children "...were cold-bloodedly murdered in their homes with no signs of fighting...I can't forget what happened there...I saw the atrocities committed..." witnessed an Israeli Haganah officer.
Lilienthal wrote that the massacre of Palestinians was "carefully concealed from the west--Americans in particular...who out of abysmal ignorance and a gnawing sense of guilt over the Holocaust accepted in toto the ideological Zionist fairy tale including the myth that the Arabs were being well treated" but in practical, economic, human and social terms they were being decimated.
The resulting enormous humanitarian and refugee crisis that Israel created, "was virtually unreported to the American public" and constituted "a cover-up and cover-over with few parallels in the annals of man." Alfred suggested part of the reason was a " a letter by the press advisor to Israel's Washington Embassy: It advised that anyone interested in the Arab refugee problem was to be considered 'pro-Arab oriented' and hence 'anti-Semitic."
Other topics covered in The Zionist Connection :
* Dual loyalty encouraged among American Jews.
* The 1967 Israeli attack on the USS Liberty which killed 34 American sailors, injured scores more. The US inquiry a "white -wash." Israeli intent was to sink the vessel and blame the Egyptians.
* The Khazar's adoption of Judaism in 740 AD was "historical fact." Zionism's founders, Herzl, Weizmann, etc. were Khazar descendants and NOT Hebrews thus nullifying their claim to Palestine.
* Christians deceived and in bondage regarding modern Israel.
* Accused Jews and Christians of essentially worshipping the state of Israel while ignoring the moral implications.
* Exploitation of the Holocaust even though Zionists cooperated in sending thousands of their fellow Jews to their deaths for political purposes.
Posts on his website included two important pieces: Liberating America from Israel written by former Republican Congressman, Paul Findley. In the first paragraph, the 22 year veteran of the U.S. Congress states: "Nine-Eleven would not have occurred if the U.S. Government had refused to help Israel humiliate and destroy Palestinian society. Few express this conclusion publicly, but many believe it is the truth."
Another was a write up about Edwin Wright, a son of missionary parents, who did an extensive study of Zionism and learned Zionist ideology says they must have a large enough area to accommodate the whole of the world's Jewish population. 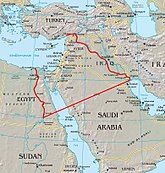 Also from Wright's writings: "It is not brought out in Zionist propaganda in America but what they claim is all the territory from the Suez Canal...to southern Turkey ...Lebanon, Syria, Jordan, and Sinai from...the Nile to the Euphrates." "This is the territory they call, "Eretz Israel" ( Greater Israel ).
They also believe their messiah will not return until they control all of Eretz Israel. 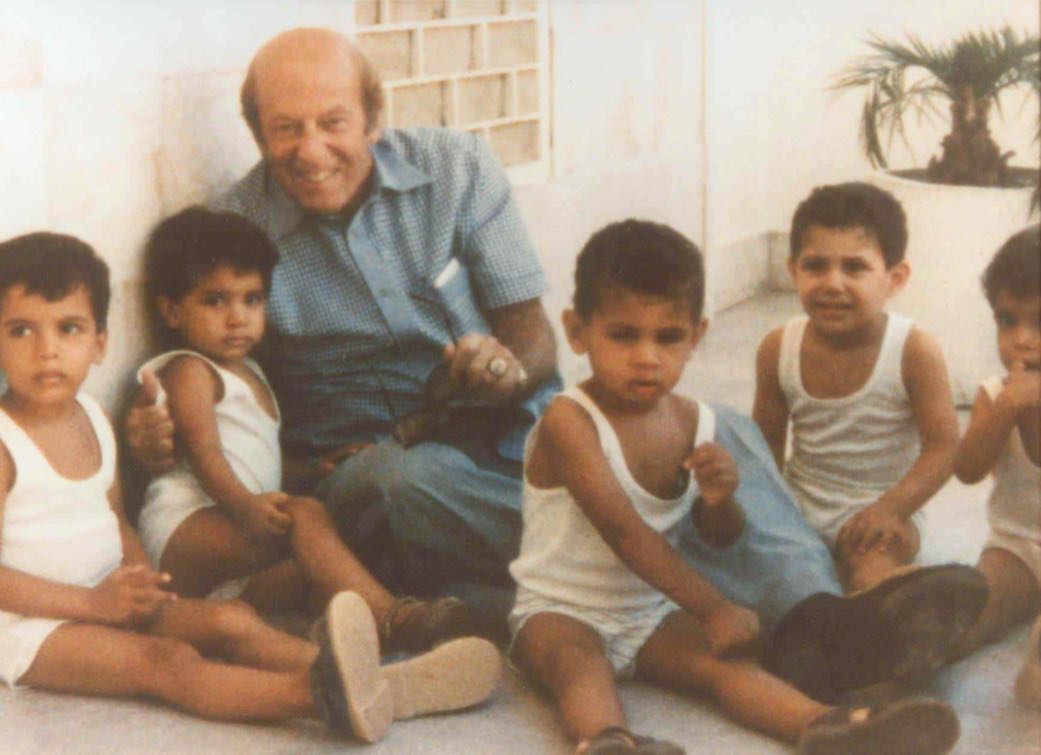 CONCLUSION
Reading about the horrible mistreatment the Israelis dealt the Palestinians, I couldn't help thinking of a scripture, that Lilienthal also quoted: "But the stranger that dwells among you shall be unto you as one born among you and thou shalt love him as yourself; for you were strangers in the land of Egypt: I am the Lord your God." Leviticus 19:34
Unable to personally respond to emails in 2008, I was told by his webmaster he had indeed embraced Jesus Christ as his Messiah. A photo on his website showed Alfred squatting down holding a young Palestinian child while several others gathered around him.
He exhibited more of the love of Christ to those unfortunates than the American Christian Zionists who blindly aided and still aid their persecutors. "By their fruits you will know them."
----
Michael Cangemi, is a Texas artist, 9/11truth activist, and Bible college graduate. His website: www.cangemifineart.com  I was raised Catholic, saved in Evangelical and Full Gospel circles. I believe there is a lot of good Biblical teaching within Churches. I have a  problem with silence and willful ignorance in the face of deception and mass murder and the reasons it was done. I believe the Church is deceived about Zionism, which they support publicly.
Michael adds:  Among the fast amount of material in The Zionist Connection, Alfred also included a significant quote from George Washington's farewell address warning of the dangers of a "passionate attachment" to any one nation: "So likewise, a passionate attachment, of any one nation for another produces a variety of evils. Sympathy for the favorite nation facilitates the illusion of an imaginary common interest, in cases where no real common interests exists, and infuses into one, the enmities of the other, betrays the former into a participation of the quarrels and wars of the latter, without adequate inducement of justification..."
How well that advice should be adhered to regarding our sordid relationship with modern Israel.
For the most recent book about the attack of the USS Liberty, and an soon to be released movie, visit www.erasingtheliberty.com  And yes, Jack Bernstein too, great American patriot. Thanks for the mention.
Also by Michael Cangemi  - God is a 9-11 Truther
Related - Israel's Descent into a Moral Abyss

What a nice looking man, no resemblance to Jacob R at all. Always glad to learn of another Excellent Jew. I came across Benjamin Freedman and Myron Fagan early on in my journey of discovery. Later, Gilad Atzmon, Miko Peled, Henry Makow, etc., more recently Steve and Jana Ben-Nun. Of course two of my granddaughters are Excellent, although itâ€™s painful to see the liberal brainwashing theyâ€™re undergoing here in Kalifornia.

Great piece, Henry, I'd add Jack Bernstein, one of the early ones, along with Benjamin Freedman, "Jewish Patrick Henrys" opened my eyes, id call Henry, our greatest Ameican Patriot for Liberty for all God's creatures!

One of the best Americans who happened to be a joo. He Did what we should all be doing and that is fighting against our countries true enemies, the tamudic kabbalistic satanic joos

Michael Cangemi seems to be on solid ground on the ethical dimensions of the Israeli story. However, ethical considerations have little or no effect on the course of history. What will hasten the elimination of the State of Israel is the fact that most of their neighbors perceive that State as a curse rather than a blessing. Those who are allied with them, such as the Saudis, share a similar image.

There have been many American Jews who put their loyalty to America first.

Caspar Weinberger was much against Israeli spying. He strongly considered the death penalty in the Johnathan Pollard case. Israeli spying on America still goes on and has been for many years. Weinberger was a patriot. He also was a Captain of an Infantry Unit during WW2.
The allowed Israeli assault on the USS Liberty was a shameful disgrace to America. It should have been a wake-up call to Washington on the true nature of their relationship with Israel. Instead, Washington is still in denial of Israel's intent as an "ally".

Just supporting and defending Israel is not enough, they want it all

DC is as occupied as the West Bank.