Was Father Charles Coughlin an "Antisemite?" 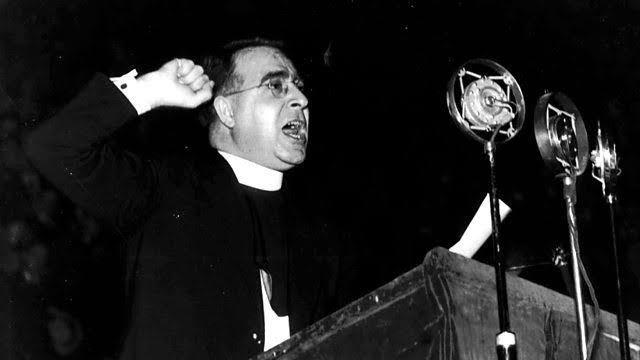 Via his popular radio show and weekly newspaper Social Justice, Charles Coughlin, the Canadian-born clergyman and orator exposed the Communist agenda of the Fed from 1930 until 1942.

By 1934, Coughlin was the most prominent Roman Catholic speaker with a radio audience that reached 30 million people every week. He was receiving more than 10,000 letters every day and that his clerical staff numbered more than a hundred. He foreshadowed modern talk radio and televangelism.

Even in a Great Depression, with this kind of influence, it was impossible to throw off the banker yoke.

While utilizing his classic Irish brogue and his uniquely powerful and near-hypnotic delivery, Charles Coughlin's ... "unforgivable sin" was his measured but factual revelation of heavy Jewish control of the banking establishment, as well as deep Jewish involvement in the Bolshevik Revolution that murderously overthrew Christian Russia.

For this, the notorious "anti-Semite" label that Father Coughlin endured when he was alive has, in effect, been "nailed" to his memory, to posthumously "crucify" him. (To hear Coughlin ably defend himself against shallow screams of "anti-Semitism in his day, listen here.)

Yet, amid the cruel calumny hurled at Coughlin back in his day and today, no one has ever bothered to ask: Was he really an anti-Semite? Or did he simply state uncomfortable facts while bringing the message of Christ to all peoples, including the Jews, for the priestly purpose of saving souls?

For the record, Coughlin's view was that Germany's National Socialism and Communism were basically variants of a centralized dictatorship, the former being nationalist and the latter internationalist in scope.

So while Coughlin occasionally spoke favourably--largely if not totally before World War II--about some of Hitler's nationalistic public works projects and financial schemes on a practical level, he repeatedly rejected both the National Socialist and Communist ideologies and instead sought a "Christian Americanism" that was nationalistic but was maliciously misrepresented as a species of Hitleresque fascism. Coughlin also saw Hitler's Germany and Mussolini's Italy as hedges against Soviet communism.

In Coughlin's 1938 broadcast, "The Rightists Go into Action," he clarified: "Is the federal government more capable and better equipped for managing the affairs [of] the various states than are the states themselves? Communists and Nazis, both of whom adhere to the principle of a strong central government, answer in the affirmative. The disciples of Washington, Jefferson and Lincoln answer in the negative. Nationals--that is, those who believe in nationalism rather than internationalism--also answer in the negative." 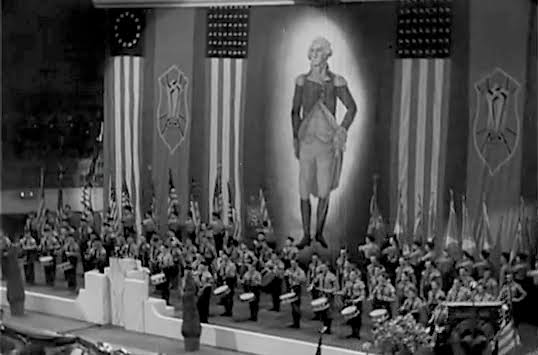 In his early 1939 article, "An American Christian Program," Coughlin commented on the recent "Nazi Bund Rally" at Madison Square Garden as follows: "Meanwhile the vast majority of Americans are still Americans; they are sympathetic neither with the Nazi Bund nor with the Communist convention . . . . Thus, if Americanism and Christianity are opposed to both Nazism and to Communism, the time has come for true Americans and true Christians to organize against both."

So, clearly, the miscreant media, in its never-ending war against Coughlin's legacy, has never bothered to read Coughlin's erudite articles or listen closely to his eloquent speeches that sold out many a concert hall and sports stadium during the Great Depression. The same can be said about those who pass as Western "historians." ...

To get to the core of the money problem, Coughlin wrote, among other works, the book, "Money: Questions & Answers," a practical guide released under the auspices of the National Union for Social Justice (NUSJ), a political lobby that Coughlin founded in the Detroit area in 1934 to challenge President Franklin Delano Roosevelt's reelection, among other goals.

The speeches, sermons, articles and books by Coughlin  ... show that, far from being the brutish demagogue, he was actually a highly capable analyst who carefully sorted out the root causes behind the world's problems. Not only was his criticism of monopoly capitalism (as opposed to genuine free enterprise) not an endorsement of communism; he also felt that ideologies like Communism and Nazism would never have found fertile soil in the first place if Christian America and the West in general would drive out "the modern moneychangers" in a Christ-like manner.

Coughlin also accurately identified Bolshevik revolutionaries as another Jewish cabal bent on destroying Christian civilization. But he did so because he was a defender of the Christian faith, not because he "hated Jews."

He prayed and worked for the salvation of all, including the Jews, who he hoped would find Christ. Notably, Coughlin's parting of ways with President Franklin Delano Roosevelt over the "New Deal"--after his initial enthusiasm about the federal Depression-era recovery plan--turned the power of the federal government against a man of the cloth whose works had gone viral, reaching well beyond 20 million radio listeners at their peak before Coughlin was driven off the air and into obscurity.

Coughlin's fate was sealed when the Vatican pressured him to retire from his radio-based activism. FDR's administration even went so far as to revoke Coughlin's U.S. Postal Permit that had enabled him to distribute Social Justice efficiently. That killed the newspaper.

And the NUSJ, by the way, was forced out of existence after just two years. Father Charles Coughlin lived out his days in Royal Oak at the church he founded and funded with donations drummed up via his radio show, steadfastly obeying the orders of Catholic authorities to return to daily priest work and put his activism aside.

I have all but one or two of Rev. Fahey's books.  They aren't banned, just pushed down the memory hole so that most people don't know about them.  They are republished by mostly small Catholic oriented publishing houses.

Probably Father Coughlin was of the same understanding but Fahey is the only one I've read who approaches the "money problem" from a true Christian viewpoint.  His basic thesis is that proper economic order has been turned upside down with the family at the mercy of industry and industry absolutely controlled by finance which, by improperly OWNING THE EXCHANGE MEDIUM, OWNS ALL, INCLUDING NATIONAL GOVERNMENTS THEMSELVES.

Properly, Fahey sees (in my paraphrase), that finance belongs at the bottom of the equation as the SERVANT of industry allowing industry to SERVE the family so that the family has the time and means TO EFFECTIVELY SERVE GOD.  He points out in at least one of his books that the very word "economy" originally had to do with the material welfare of the family.

Moreover, Fahey corrects the thinking of the great majority of those who would have proper economic life, as most want the government to not only create real money SPENT into circulation at the proper ratio to exchanges, there to stay for the use of all at NO COST TO ANYONE (which would rid the world of parasitic "investors" or "speculators" living high off the purchase of their needs by everyone else), but also have the government control banking - the central bank concept.

Fahey rightly shows that the latter is worse than private ownership of both money creation and bank loaning as it gives government the ability to likewise economically promote or destroy whomever it pleases at will, but with even worse motives than private bankers whose main first motive is profit.  Fahey states that properly governments must NEVER be involved in banking and that bankers must NEVER be allowed to create exchange medium in any manner, including the construction of checking accounts.  I.e. bank loans MUST be loans of actual government money they have in their possession as must all other accounts be of government money in the bankers' possession.

Obviously, if the same entity owns, or just controls, both money creation and the loaning of it, that entity controls the material world.  Exactly the problem the world suffers under today with the Rothschild cabal, et al.  As mentioned by Fahey in the 1930s, Hitler had escaped that cabal and enabled his German government to create real money but he used that captured banking politically to make great corporations where he wished and also destroy businesses where he wished.

Comments for "Was Father Charles Coughlin an "Antisemite?" "

Fr Denis Fahey wasn't the only clergyman who wrote books to unmask the synagogue and it's tow main weapons: a visible one, communism...and an invisible, freemasonry.

He helped editting and wrote the preface to "Waters Flowing Eastwards" by L. Fry.

There the "Grand Orient Unmasked" by Ft George Dillon.
"War of Anti-Christ With The Church and Christian Civilization" Fr Dillon.
"The Plot Against The Church" by JPII while still a bishop, creating a pseudonymous go protect himself, Maurice pinay - someone has hijacked his pseudonymous to create a website.

One of the first by Cardinal Caro y Rodriguez "The Mystery if Freemasonry Unveiled".

And there are many more.

Papal encyclicals as well, like Leo XIII "Humanus Genus" which alerts and instructs the catholic universe for the freemasonic infiltration of the church [29th century]

I don't put too much stock in the label because it could apply to almost anyone who has studied religion or history and has discovered the unbiased truth. Just exposing these truths can possibly land you with an antisemitic accusation. Even some of the Jews themselves who have opposed the "part line" have been labeled antisemites also.

The antisemite accusation for any politician or public figure today can ruin his or her career.
I don't think Father Coughlin was a cruel man who meant harm to anyone. The church that Father Coughlin built (The Shrine of the Little Flower) was constructed between 1931-36 in a heavily Protestant area of Royal Oak, Michigan. Upon completion the KKK burned a cross in front of his church. His church also had a fire.

I also read that Babe Ruth was at the Shrine of the Little Flower church when the Yankees were in town playing the Tigers to help with collecting donations. Today that would probably land Babe Ruth on the antisemite list also.

Father Coughlin made the mistake of mixing religion with politics.

America started as a theocratic type of nation that was rooted in the Holy Bible. Unfortunately by the 1930s that theocracy had been lost and Father Couglin couldn't bring it back even with all the support he had. But, he cared enough to at least try.

He got all his information from Father Fahey who also is a anti Semite but a brave smart graced priest his books are banned I wonder what that tells us bingo it was truth
https://www.henrymakow.com/