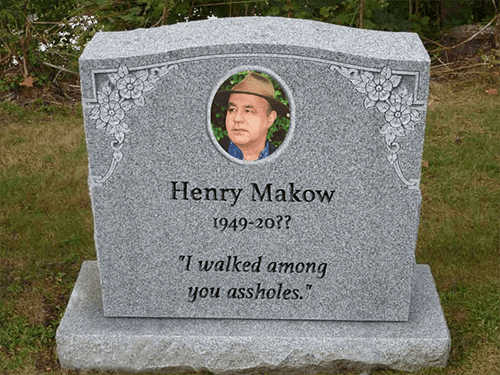 (My headstone. Some lines are just intended to shock and get a laugh.)
I'm reposting this for my many new readers who may appreciate a good line as much as I do.
Let's get our minds off the coronavirus. We're driving ourselves crazy. The best resistance if for life to go on.
For me, a good line is pure gold. I open my vault to you.
"The conspiracy is like the weather. Everyone talks about it but no one does anything about it."
Updated from Nov. 23, 2017
by Henry Makow Ph.D.
The only thing necessary for the triumph of evil is for good men to be given good jobs.
Prejudice is another word for experience.
I believe in self-improvement, for other people.
We live in a dogma-eat-dogma world.
People are rewarded inversely to how productive they are.
Homeopathic dog training. (Whisper the commands under your breath.) 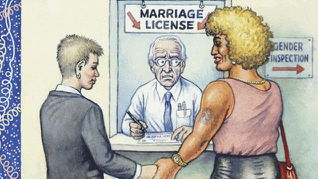 When I went to university, we were told to question authority. Today, students are told to question their gender.
Feminism harnessed the political power of women who couldn't get a date on Saturday night
(and ensured their ranks swelled.)
The best way to resist temptation is to avoid it. Luckily, temptation avoids me.
A man's religion is his day. (It's not what you believe; it's what you do.)
You have to be good to feel good.
The law of personalities. Big personalities should marry little personalities.
Had this realization about my past recently, "I looked in vain for someone who would believe in me, when i wouldn't believe in myself." No one believes in people who don't believe in themselves. We week from others what we won't give ourselves.
I am solar-powered. I don't want to get up on an overcast day. 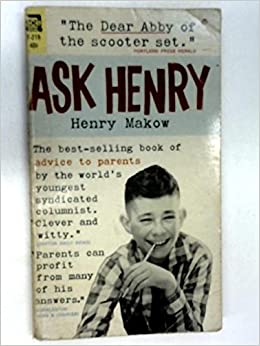 Referring to my early fame as "Ask Henry" (1961-1964) - Advice to Parents from a Kid, in 40 newspapers:
I have a great future behind me.
Like Egypt and Greece, I peaked too early.
Organized Jewry (Communism) is a corrosive acid that seeps into the fissures of society (race, gender, class)  to undermine it by promoting "social change". Despite the moral pose, there is no genuine desire to empower the goyim. See diversity, socialism, liberalism, feminism, migration, transgenders, and homosexuality in this light.
Three laws of socio-dynamics. 1. We are attracted to people who have something we want. 2. We are repelled by people who want something from us. 3. We are indifferent to people who don't belong to either category. Special Fourth Law - We are attracted to people who may have something we want in the future.
(I am the "Father of Socio-dynamics." I wanted to be the "Father of Hygiene" but my son refused to change his name.)
Life begins with exalted expectations followed by a long, slow decline until finally, we meet death with perfect equanimity.
After making a shipwreck of my life, I am cast up on the shores of old age.
"It was an up-day in the bear market of his mind."
The way to impress women is don't try.
Nothing demystifies women and sex like marriage.
If you live each day like it were your last, do you still need to clean your house?
Me: You can't teach an old dog new tricks.
Wife: Yes you can, but you're not a dog.
Teaching university was bringing answers to people who had no questions. They were the wrong answers (I was a socialist) but the observation still applies.
In a professor evaluation, students were asked "what is the best thing about Dr. Makow's class?"  One girl answered, "Not too early in the morning, and not too late in the afternoon."

As "Lao Tzu"
The mind is a prison where the soul is tortured by thought.
The major cause of unhappiness is the pursuit of false happiness.
We have a choice. Conversion or Diversion.
We are slaves to the world in inverse relation to our dedication to God.
Empty your mind of all thoughts. What's left is the real you. (Why do we assume we must think all of the time?)
---------------------
c.2020 Henry Makow  (i.e. it's not plagiarism if you acknowledge the source.)

Henry this is by far the funniest expression of truths I’ve heard in a long time. I thank God for your courage, genius and wit.

Words cannot express how much I enjoyed this.

"The only thing necessary for the triumph of evil is for good men to be given good jobs."

This is so true. I know of many good Christian men with good jobs and pensions who won't even march in a pro-life parade much less write a letter. And many say, "Christ is coming soon. He'll fix everything."

If it wasn't for time, everything would happen at once.

I'm not Jewish but I had the operation.
Courtesy of the Russian Rabbi I. Cutchapeckeroff.

I love you, honey, until the money runs out.

Roses are reddish, and violets are blueish, if it wasn't for Christmas, we'd all be Jewish.

Do unto others but do it first.

Turn the other cheek and hit him again.

What does a Cadillac sound like speeding through Beverly Hills? Jeeeeeewwwwww!!

If I had it to do all over again, I'd do it all over you.

As Confucius may have said, women who drive upside down have hairy crack-up.

As a1st Sergeant once told us in the military.
"People, opinions, and political views are always changing with the public.They don't remain constant".
When did a rose quit being a rose?
Another one I heard years ago was,
"Happiness is the byproduct of discipline".
When did short-term gratification in exchange for long-term misery ever become a good deal?

Hank Williams once did a song called 'Wealth won't Save your Soul'.

How very true this is. You don't even hear the word "soul" much used anymore these days. It has been gutted out of people's consciousness by the atheist secular de-humanists.
There are a lot of 'New Age' beliefs out there today. One of them is similar to the Hindu belief of Reincarnation that we keep coming back until we "get it right". If this is the case what then do we come back as? A man or woman? A Chinamen or an Englishmen? And, how long before we come back and where? Are we "not to worry" because we'll have another chance at it the next time around?

If we believe this then do we also believe that Jesus Christ died on the Cross for nothing? Salvation is now and not in a past or future life.

It's all about Jesus Christ. He has been given the authority over heaven and earth. There is no way into the 'Kingdom of Heaven" without him, it's his kingdom.

Hi Henry, Just been reading your article my best quips and smiling. Some great ones there. I only can add one or two of mine. Please feel free to steal any that you like.

1. If you don't want to be you, who would you rather be or a wasp.
2. The truth is not decided by majority vote.
3. Lastly, If you don't start drinking in the morning, you can't drink all day.

I phone is the new golden calf.

1. When faced with a powerful authority just say YES and do NO.

2. Always remember you have two choices. Most people believe they have no choice.

3. True contentment is doing nothing successfully.

You wrote : « I judge a religion by its effect on the believer's life. If believing in Heaven makes a person wholesome and happy, that's all that matters. In other words, religious belief has to be reverse-engineered. Believe what makes you a better, happier person. »

We can not agree with this pure subjectivism. God, the Creator of Heaven and Earth - and this is objectively demonstrable - exists independently of the opinion of his creatures. As a machine manufacturer - and how much more! - It is He and no one else who provides the instructions for use and the purpose of his work. That of man is the return to his Creator and the purpose of the (brief) earthly life is to deserve it. What better reward for the one who all his life was strained towards the Good, the Beautiful and the True, than to see them face to face in the person of God ? !

If you were right, everyone would be right, especially Jacques Attali who just said that he would have managed his life if the world was slightly worse after him (https://www.youtube.com/watch?time_continue=10&v=w_zHbcOirJI) !

How do you know this is subjective? It may be God speaking to you.