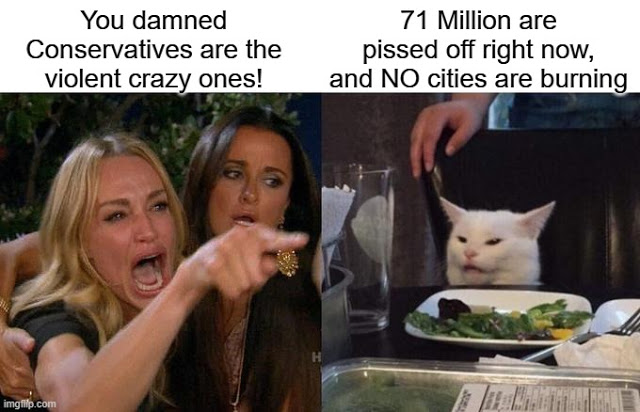 (Toddler tantrum)
Makow- We are witnessing satanic possession in real-time. Communism is Satanism. Satanism is turning reality upside-down.
White is black and black is white. Good is evil and evil is good. Truth is false and lies are truth. Healthy is sick and sick is healthy.
Vote fraud. Casedemics. Democratic principles like free speech and honest elections are trampled in the dust. Black Lives Matter but White Lives Don't. People who pretend to be morally superior bludgeon freedom-loving patriots into accepting their diktat.
Satanism is the worship of death and destruction. War is its highest expression.
by Mike Stone
(henrymakow.com)
Listen. Listen very carefully. Do you hear it? That moanful cry in the distance? That far off wail of anguish?
Brace yourself, because it's coming, oh yes, it's coming.
Trump is going to win the election and you are going to witness an emotional meltdown from the left. It will be the most intense, the most outlandish, the most mind-bogglingly insane display of raw emotion and street theater you've ever seen in your life. It won't be the Great Reset. It will be the Great Recount.
The evil queen bees of Black Lives Matter and their beta male followers will kick things off, faithfully following orders to riot, loot, and burn. They'll be joined by the ugly skanks and eunuchs of Antifa. Televisions will be taken, cosmetics will be confiscated, liquor will be liquidated, but not a single pair of work boots will be stolen.
Colleges across the country will be forced to set up emergency safe spaces, stocked with teddy bears, blankets, pacifiers, and hugs for their distraught students.
Professional sports will shut down due to protesting players. Schools will close. Leftist cities across the country from Los Angeles to Philadelphia will cease functioning due to union strikes and teachers taking to the street.
Democrat governors and mayors will order instant lockdowns of their states, cities, and towns to punish their citizens.
Hollywood celebrities will howl with indignity and threaten for the millionth time to leave the country.
The Twitter overload will be so massive, so gargantuan, the system will collapse.
The entire mainstream media will jump in with their usual outcry of manufactured outrage, only magnified by a million. You will see nothing - absolutely nothing - in the news cycle for days on end other than grown men and women crying, shrieking, and bawling like babies.
You'll hear calls to secede, calls to resist, calls to overthrow the government by the same people who just attempted their own overthrow of the government.
Sales of anti-depressants will skyrocket. Alcohol consumption will quadruple. Suicide hotlines will crash from the overflow of callers.
Misery loves company and you'll be pressured to join in. Dare to laugh or show a smile and you're apt to be attacked. Hang a flag on your window and it's liable to be met with a rock. Show your face anywhere in public without a hangdog look and a tear in your eye and you'll be forced to run for cover. This is one time when it might actually make sense to wear a mask.
The uproar will be loud and long. You'll hear from the fake conservatives, those not-so-hidden traitors; you'll hear from the controlled opposition pundits, those wolves in sheep clothing; you'll hear from leaders around the globe who have sold out their own people for their thirty pieces of silver. 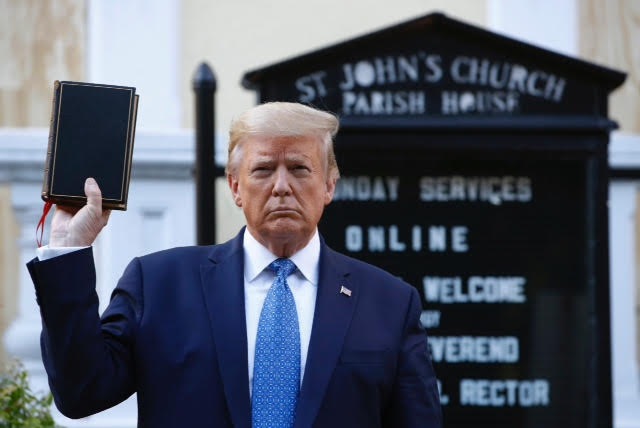 Keep the faith through it all. It's up to good people, such as yourself, to help those in need, to keep America great, and to combat the forces of darkness that surround us. Without you, President Trump can do very little. With you, he can move mountains.
Don't think this is the end of it. On the contrary, it's only the beginning. There remains much work to be done. But for a few days at least, enjoy the show. Pat yourself on the back for a job well done. It's going to be quite a ride. Get your popcorn ready.
----------
Mike Stone is the author of A New America, the first novel of the Alt-Right, a dark comedy set on Election Day 2016 in Los Angeles - - Available on Amazon.
Related- Jim Stone predicts active persecution of conservatives if Biden is confirmed

Is your â€žMike Stoneâ€œ the alter ego of your â€žAlois Fozdykeâ€œ? ItÅ› much deeper than he thinks. I donÂ´t have a dog in the American presidential race but IÂ´m thinking that Trump will â€œwinâ€ â€“ the â€œleftâ€ will meltdown and when Trump changes his tune and does an about-face, the â€œrightâ€ will meltdown too. Trump is Tribe of Dan, his daughter married Esau. He is no good, none of them are. ItÅ› about time people recognized the game being played here. It is a double-cross.

The MSM has been facilitating a "divide the nation" strategy for some time now. If Joe Biden were ever certified as president we would have an administration that would be heavily under the control of the anti-nationalists globalists.
The Antifa Left Democrats will also be very unhappy with Joe Biden. They are expecting America on a silver platter for their support and won't get it.

The Biden/Harris team will not get the respect abroad that President Trump did and that will pose a problem internationally for America. Both parties are contemplating the consequences if these questionable results stand.

As for the MSM they no longer report the news. They are detached from all the news in America that doesn't fit their fictitious scenarios. Everything they do and say now is under the direction of the Covid Cartel and the Globalist kingpins. Sadly, very few people believe them these days and the public is going elsewhere for their news. The American public has caught on to their schemes more than they will ever admit.

During Eisenhower's two terms, congress was purged of the last real, anti-communist conservatives. Even though Eisenhower was widely popular, he wouldn't support any of the real conservatives, to help them get reelected. They were removed from congress during the 1952-1958 period when it went from a Republican majority to democratic, and over 100 real conservatives were removed Since Eisenhower wouldn't give them his support, and the evil cabal supported their opponents with money and media, they lost their elections. That was the era of McCarthy, who heroically exposed communists who infiltrated the USA and were subverting the country from within. He was (likely) assassinated for his efforts, and McCarthy has been demonized ever since. Trump, seen holding a bible in front of a church, is classic fake conservative, having been a liberal democrat his entire life until they had him pretend to be a conservative republican to play his part in this communist takeover attempt. It seems to me there are no more real anti-communist conservatives left in congress, or throughout the world for that matter. Communism is satanism politicized, as you said in your well-stated opinion at the top Henry, and this is nothing less than an attempted communist-satanic takeover of the world. If "we the people" don't unite to stop this nightmare from continuing, the "powers that shouldn't be" will have a stranglehold on the world, then our only chance of being saved will be by God.