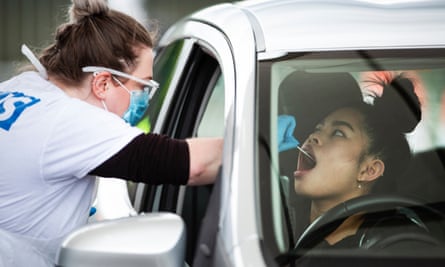 I think that when we analyze this situation we often forget that this virus transmission model "Germ Theory" is an article of faith rather than a fact of science. Many controlled experiments have been performed to try and prove this, they have never succeeded. If they had succeeded, many more experiments would be performed to establish viral transmission models, which would be dependent on a large number of variables and these models would bear little resemblance to the current simple models that don't work.

It's important to keep in mind that the Terrain theory is more likely the truth because it has been suppressed and because it does not create the need for government protection. If you want the truth, look for what has been censored or suppressed. No one suppresses or censors lies.

This is the more rational model to apply and when we think about nurses being infected to a large degree may be explained by the likelihood of them being first to receive the vaccine rather than being in an environment where they are more likely to catch a virus than the average person.

When I think Iâ€™ve seen and heard everything, I get shocked again. Last night on Fox News, where they were discussing, how and where Trump is being taken to hospital, a guest/doctor or scientist, stated point-blank, that all Trump needs to do, is wait this out. The anchor was discussing how everybody wants to see Trump get better, even Biden himself. This Guest, simply stated, all you have to do is wait it out. He said 99% or more, of infected people, recover. Image that. Just try please. Where did he get this notion from?

This he said, was according to the John Hopkins University of Medicine, Coronavirus Resource Centre. See the data for yourself. Look at the deaths per 100,000 population. I mean, you have to look at this in perspective, do you not?

Take San Marino, the worst-case data of all

Take the whole world, if you please.

So let Me understand this, from some kind of LOGICAL basis. Boris Johnson and HIS declared, Operation Moonshot Programme (oo7 style), are going to spend 100 Billion Pound Sterling, to increase TESTING to millions per day. Never mind, he does not know, how he is going to achieve this alone. BUT, but, but, kick me in the but. He has the following aims.

â€œthe twin aims of boosting economic activity and avoiding a second national lockdown. But without better tests, it could end up creating more problems than it solves."

The big problem, according to the above quotation, is that there will be MORE False POSITIVES

Which will do what to the numbers? Increase the confirmed, which will decrease the per thousand death Fatality. Unless Deaths go up, then the insanity of this whole scheme will go up. Why is he testing, for what, for what result. How is testing going to solve anything? Is he going to test in order to increase the Fear factor, in order to decrease national Immunity ???

Unless BORIS (Nice Name) has something else up his sleeve, this will not end well, either for Boris, or the UK people. Boris needs more deaths to make this fly properly. God, I can not believe I said that. They, the UK people are beginning to demonstrate, in larger and larger numbers, rightly so, which the MSM, the â€œPresstitutesâ€ Craig Roberts, will not report on. God, you just have to love the MSM do you not? The MSM could end all this madness in days. If they would just â€œUnite Usâ€ (Braveheart). To the MSM, this will eventually affect you, and your lively hoods, do you not know that.

I am not a professional economist Boris, but your proposal to spend 100 billion pounds sterling, on a dubious COVID19 test, approaching millions of tests per day, will cause inflation. Never mind trying to avoid a second lockdown, this will be a lockdown. Millions of multiple daily testing may stop economic activity altogether. There may not be time to get anything done, just testing, for something, THAT DOES NOT EVEN EXIST. Wake up the UK.