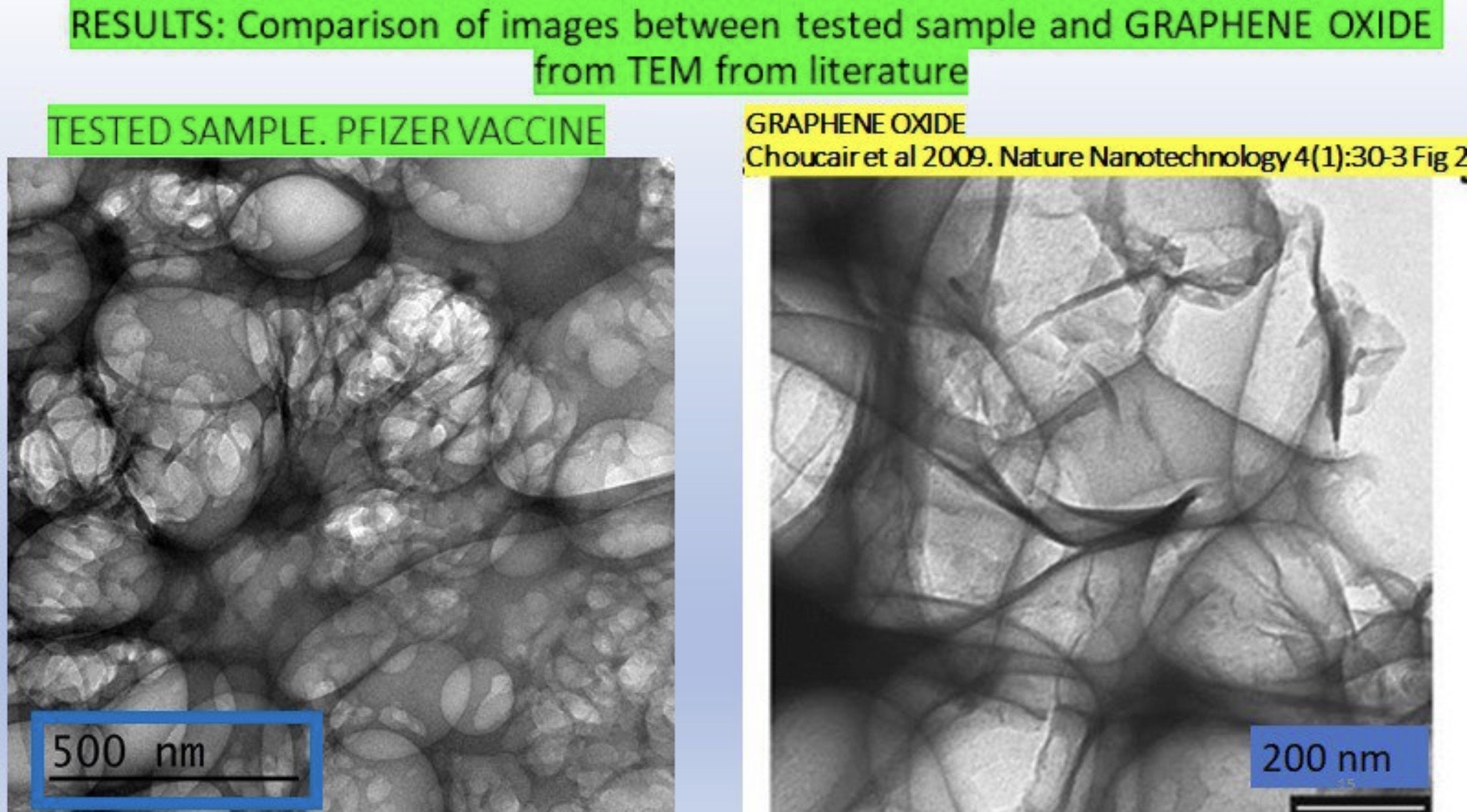 Spanish researchers put the Pfizer vaccine under an electron microscope and found it contains 99% graphene oxide and hardly anything else.

There is practically NO evidence that this "vaccine" is gene therapy. There is ZERO genetic material:  mRNA or DNA or spike protein. It means this "vaccine" has nothing to do with a so-called virus. This product wasn't developed to avoid an infection caused by a virus. The true purpose of this product remains hidden. No official statement from governments or health institutions has been made. The toxicity of graphene oxide is reason enough to stop the global vaccination program.

First Comment from E (on Gab)   MUST READ
It seems to be proven that the anti-Covid vaccines contain graphene oxide, according to the scientific report of the University of Almeria (5th Column), and it is likely that all of them contain it since their side effects are similar.
The combination of 5G, which is to be launched globally this summer, with the graphene particles that hundreds of millions have been injected with the 'vaccines' will be the next virus. Graphene is magnetic and conductive inside the human body and can even settle in the brain, affecting neuronal transmissions; it also amplifies the frequencies received and acts as an antenna.
The President of Chile himself has stated that 5G will change and detect the thoughts of the population and alter their behavior. This requires the graphene antenna that acts as a receiver and transmitter of information from the brains. Let's think that Sars Cov 2 has not yet been sequenced. Nor can we be sure that the spike proteins are real, even though a Japanese report reported the conclusion that these proteins - supposedly contained in the injection - reached all the organs of the body.

Makow - If this is true, it would discredit a lot of MDs who are saying it is gene altering. Could that be the purpose?

Jim Stone says this graphene story is nonsense.  Says graphene is black. The author refutes him below article.

-------------------- "We have developed a simple, effective and scalable method to chemically deposit Fe3O4 nanoparticles onto GO. This hybrid can be loaded with anti-cancer drug DXR with a high loading capacity up to 1.08 mg mg1 . This GO-Fe3O4 hybrid shows superparamagnetic property and can congregate under acidic conditions and be redispersed reversibly under basic conditions. Both the GO-Fe3O4 hybrid before and after loading with the molecule DXR can be moved regularly after congregating at acidic pH values by the force of an external magnetic field. This pH-triggered controlled magnetic behavior makes this material a promising candidate for controlled targeted drug delivery. Thus, these graphene-based magnetic nanoparticles, with good solubility and further functionalization capability, are expected to find practical applications."

A June 28th  report from the University of Almeria (in Spain)  supports the findings of the two researchers hosting the daily broadcast.

Surprising conclusions on the first results of the microscopy on one covid-19 mRNA Comirnaty (Pfizer) sample.

Suspicions of the two researchers turned out to be true. There is almost NO biological matter in the Pfizer covid-19 vial. What the lab in the University of Almeria found has nothing to do with mRNA.
The main matter found was a substance more alike to nanoparticles of graphene or a very similar nanomaterial. Extraction and quantification of mRNA in the sample, identified that 99% of the whole substance inside the vial was highly probably graphene oxide or something very similar, just very little genetic material was found. Until now, no lipid nanocapsules were identified. The study mentions that there is a reduced form of graphene oxide (GO.) When graphene oxide is mixed with hydrogen it becomes MAGNETIC (MGO.) It is also known as reduced graphene oxide (this happens when it is injected blood too.)
Graphene oxide layers from scientific literature and from a commercial graphene oxide sample compared against the microscopy performed on the Pfizer sample show identical patterns in both electron and optical microscopy, leaving doubt we're talking about the same material.
The study offers solid evidence of possible graphene derivatives because the structure saw in the microscopy is characteristic. Academics who previously worked with graphene oxide were consulted and agreed there is no doubt about the presence of graphene oxide in the vial.

It has been only one brand jab but more tests are needed to be done with other vials. More studies are to come with some other different technics. La Quinta Columna makes a call to other institutes and universities to join this research crusade for the truth.

Related-  Jim Stone says this Graphene story is a hoax.  If vaccine was mostly graphene, it would be jet black...also can't pass through a needle.

Des Marxants replies: "In coating technology graphene oxide can be used also. Multilayer graphene oxide films are optically transparent and impermeable under dry conditions. Exposed to water (or water vapor), they allow passage of molecules smaller than a certain size. Glassware or copperplates covered with such a graphene "paint" can be used as containers for corrosive acids. Graphene-coated plastic films could be used in medical packaging to improve shelf life"... wish him luck with his black nose when the nasal version of the covid-19 vaccine get released

Why is Graphene Transparent?  and Stone is mistaken about graphene

https://www.numsquare.fr/choisir-son-forfait-5g-avec-son-vaccin-contre-le-covid-coronavirus/
among the partners of this society - at the bottom of the page - there is the Thinktank "Next Humanity" which has already defined what will be our future as augmented beings.
https://nxu-thinktank.com/un-monde-de-centaures-une-intelligence-artificielle-pour-des-travailleurs-augmentes-version-enrichie/
https://nxu-thinktank.com/wp-content/uploads/2017/05/La.r%C3%A9volution.NBIC_.pdf
Al Thompson wrote-
According to the manufacturer, the Pfizer BioNTech COVID-19 vaccine includes the following ingredients:
Active Ingredient
nucleoside-modified messenger RNA (modRNA) encoding the viral spike glycoprotein (S) of SARS-CoV-2
Lipids
(4-hydroxybutyl)azanediyl)bis(hexane-6,1-diyl)bis (ALC-3015)
(2- hexyldecanoate),2-[(polyethylene glycol)-2000]-N,N-ditetradecylacetamide (ALC-0159)
1,2-distearoyl-snglycero-3-phosphocholine (DPSC)
cholesterol
Salts
potassium chloride
monobasic potassium phosphate
sodium chloride
basic sodium phosphate dihydrate
Other---sucrose
Source
AL THOMPSON'S COMMENT--
IF THIS ARTICLE AND THE FACTS ARE CORRECT, THEN THERE'S A MAJOR CRIME AGAINST THE PEOPLE THAT HAS OBVIOUSLY OCCURRED.  THIS IS A MAJOR FRAUD.  SCIENTISTS AND MDS ARE MAKING USED CAR SALESMEN LOOK GOOD.
IT'S NO WONDER THAT MEDICAL DOCTORS HAVE THE HIGHEST SUICIDE RATE IN THE COUNTRY.

Comments for "No mRNA (Gene Therapy) in Pfizer "Vaccine""

The bigger picture is that there are hundreds of experiments being used by the jab companies
and not just one kind of Pfizer or Moderna or Johnson & Johnson jab. There are many different versions.

The few jabs these Spanish researchers looked at were Experiment #78, or #12, who knows.
Celeste Solum, in this David Icke interview, outlines the very broad purposes of all the experiments categorized by
region, age, ethnicity and we don't know.

The popularity of this Spanish study is also very suspect. Why wasn't it shut down immediately if it exposes something sensitive? In my opinion, we should NEVER draw immediate conclusions from the latest study or event or breaking news which could easily be a false flag or psychological operation.