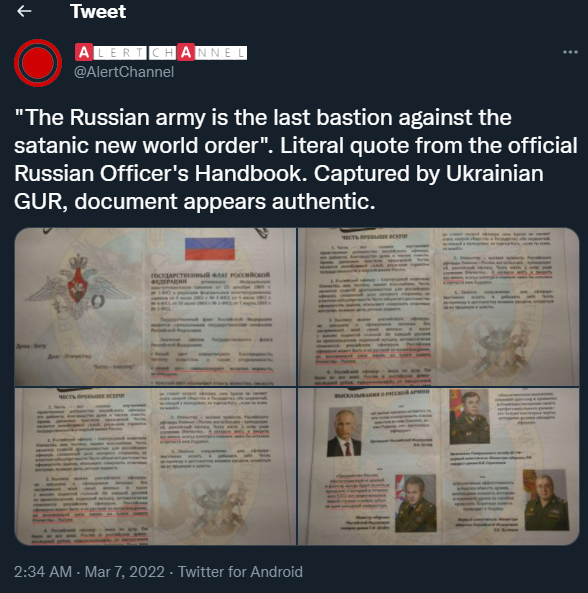 Send links and comments to hmakow@gmail.com
"The Russian army is the last bastion against the satanic new world order."
---Russian Officer's Handbook

This supports the 'Putin is a WEF defector' theory

4. Russian officer - warrior by soul. Its been like this for centuries. Russia and the Russian army - the last frontier, "holding" back the satanic "new world order" from the offensive. Until faith becomes officers support, the army itself can't support the society and the government. "Don't be nervous, don't fall into cowardice, don't hurry God... if you're a warrior, then fight!"

https://www.reddit.com/r/conspiracy/comments/t9qzgt/this_supports_the_putin_is_a_wef_defector_theory/
Makow Comment-- The fact that most US corporations are shuttering their Russian operations, and countries like Japan, South Korea and Singapore are sanctioning Russia suggests that this invasion is a legitimate challenge to the Cabalist JEW WORLD ORDER, and not just a charade. Ukraine was the tip of the satanist spear aimed at Russia's heart. If this is true, I can't see either side backing down.
The people who support Zelensky are pushing the jabs. The Masonic Jewish central banking cartel is behind both. The coercion, lying and gas lighting come from the same sources.
I can't understand why so many Ukrainians are fleeing. Clearly Russia is not targeting civilians. I expect the Ukrainian army is causing this exodus in order to garner sympathy.
Report: Putin not demanding regime change as ceasefire talks reach critical juncture
Israeli officials familiar with negotiations say Zelensky will have to decide whether to accept Russian proposal for demilitarized Donbas region or risk significant escalation
https://www.timesofisrael.com/liveblog-march-8-2022/
Hard to believe they will have accomplished anything without regime change.  Wednesday morning developments.
--
But Ukraine's comedian is in no mood to compromise.
'We'll fight in forests, fields, streets': Zelensky channels Churchill in UK speech

"We will not give up and we will not lose," he said, giving a day-by-day account of Russia's invasion that dwelt on the costs in lives of civilians including Ukrainian children. "We will fight to the end, at sea, in the air. We will continue fighting for our land, whatever the cost."

-------
Irish Savant says Russia can survive without the West but can the West survive without Russia's raw materials?
https://www.thetruthseeker.co.uk/?p=250609
--
Reader---"YOU MUST read this blogpost. I almost can't believe it----but the US Navy in cahoots with Ukraine tried to take Sevastopol back in 2014. What this story relates makes me sick to my stomach and I can't fathom on who the hell thought this up."

https://www.youtube.com/watch?v=-9smD823aE0
-
Interviews With Residents of Donbas - 'Ukrainian military has been attacking is since 2016'
https://rumble.com/vwt0d0-interviews-with-residents-of-donbas-ukrainian-military-has-been-attacking-i.html?mref=6zof&mc=dgip3&utm_source=newsletter&utm_medium=email&utm_campaign=RAIRFoundationUSA&ep=2
------
JewArmerica is the aggressor

What's happening with Russia follows the plan elaborated by the Rand Corporation in 2019.

"This brief summarizes a report that comprehensively examines nonviolent, cost-imposing options that the United States and its allies could pursue across economic, political, and military areas to stress--overextend and unbalance--Russia's economy and armed forces and the regime's political standing at home and abroad."
Reader--"Putin HAD TO  invade because for some reason---America was going to seize Crimea anyway!  What in a million years do we want to take Crimea for? It has ALWAYS been Russian! I was wondering why Zelensky kept on demanding Crimea when I even know it was never "Ukrainian"! 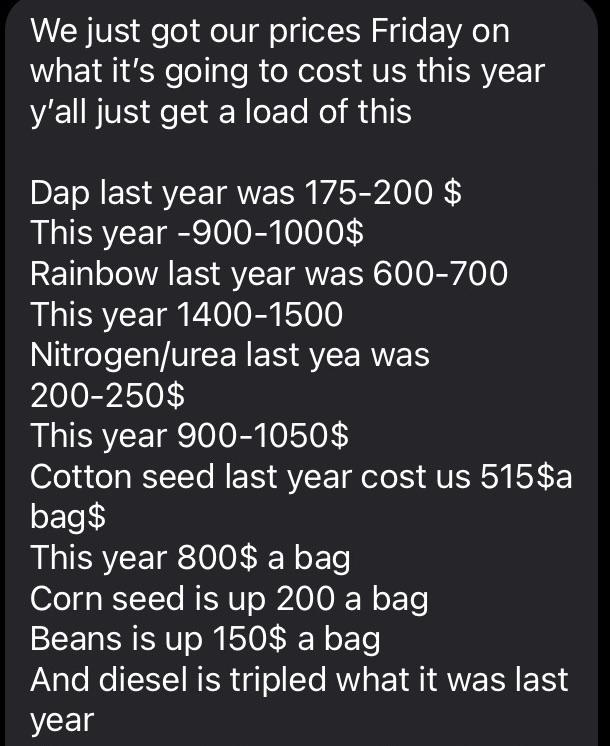 VACCINES AND OTHER
--
My family farms. My brother got the pricing Friday. He sent this to me last night regarding prices. This isn't just about gas.

--
Russell Brand ----- "The Narrative Is Collapsing" on YouTube
https://youtu.be/LBw1csl4tk4
--
Florida Becomes First State to STOP Vaccination of Children
https://newspunch.com/florida-becomes-first-state-to-stop-vaccination-of-children/--
---
Medical Evisceration of America's Military
Guest post by Kelleigh Nelson
2/3 of soldiers have been vaccinated
https://lionessofjudah.substack.com/p/military-medical-evisceration-of?s=r
--
32 min video compares US and Chinese versions of TikTok. The Chinese version is designed to make viewers better citizens. The US version is designed to infantiIize and corrupt. Video argues Chinese seek world conquest.

--
A peak into the real world of US Entertainment
Britney Spears-Illuminati slave.
https://www.infowars.com/posts/naked-drugged-8-gallons-of-blood-weekly-britney-spears-details-systemic-abuse-servitude-in-cryptic-post/

Reader--"Anatoly Golitsyn said sometime around 1960 that there was a deliberate strategy on the part of the Soviets to make it seem like the Soviet Union would fall, while in reality it would only change name and shape. He called it "The Perestroika Deception", and he correctly predicted a lot of things that happened since he made his claims - such as the fall of the Berlin Wall!  Here are two excellent interviews about it - I found them highly worthwhile watching - total viewing time is 1,5 hours, but you'll quickly see if you find it useful or interesting:
https://m.youtube.com/watch?v=2oAJqz89mXw&t=165s
(check out the first (pinned) comment, too!)

I just wanted to point out to reader Richard H (below) that the US Government, thru Secretary of State Victoria Nuland, admitted on the record and in view of public cameras that we have over two dozen bioweapons labs in THE Ukraine that are illegal under international law, the very same international law we claim to be enforcing.

I think a lot of people are being naive about Putin and Russia; believing that Putin is rebelling against the Illuminati.
He is still the evil comunist that he always was; the assassin that helped to bring down 8 highrisers full of people when he was the head of the KGB.

He grew up with jews and he loves them; Lazar, the head of Chabad in Russia and one of the most powerful visible jews in the world is his good friend.

The expulsion of some jewish oligarchs from Russia 20 years ago was just window dressing. He let stay most of the them and they keep controlling Russia. And, of course, the Russian central bank is owned by the jewish Illuminati banksters.

This is all about Illuminati dialectics to bring about third world war, and bring the NWO in its ashes.

Putin is a demon and he will always be.

There are two things that to be dealt with.

Expecting Ukraine to give away what Putin stole is utterly unreasonable. You never allow a thief to keep what he stole as he will just come back for more. Putin has shown by the invasion, which began in 2014, that he is a thief and thug.

Putin could have lived up to his part under the Budapest Memorandum and gotten what he said he wants. Under that, Ukraine is neutral. However, it is utterly unreasonable to expect Ukraine to demilitarize when you have thugs like Putin in the neighborhood.

Putin has lied about Ukraine for the last 8 years, and has created many false flags in the Donbas, with the number ramping up sharply when Putin "recognized" the statelets created by the GRU.

Many false accusation have been made against Ukraine, such hosting US biowar labs, which is utterly untrue.

lastly, it needs to be pointed out that Putin is at war with the WEF because he has his own vision of a NWO. The major difference is that his vision has Putin on top. Putin is out of the KGB apparatus, which has supplied most of the current leadership in Russia, and he is as deep state as one can get. He is no better than the WEF types, and is as thoroughly fascist as the rest of them.

Putin must return the lands stolen, and leave Ukraine entirely. He was building a Naval base at Novorossiysk before he stole Crimea. The referendum was invalid as it was held under occupation by a foreign power.

Putin is pushing the jabs too!!!! Their Sputnik is just as bad as Pfizer and is used for surveillance. Putin is a satanic Jew himself and is probably in cahoots with the rest of the globalists trying to free up the place for khazaria.

Ukrainians are fleeing because Russian soldiers shoot them and bomb their homes. I am near kiev and hear exlposions all over. Lots of Russian soldiers are scattered on highways. A lot of them beg to become captives because we give them medical treatment and because we treat them like human beings. They are afraid they would be shot back in Russia for defecting. They all admit they are given orders to block roads so that civilians cant leave or get food and bomb houses. That’s why 90% of my friends left Ukraine in the last week.

Zelensky and Co are liars and thieves, but Putin is a tyrant killing the innocent. Ukraine is a big theater stage, but dont think Putin is a good guy. Every Ukrainian male i know is fighting…olga