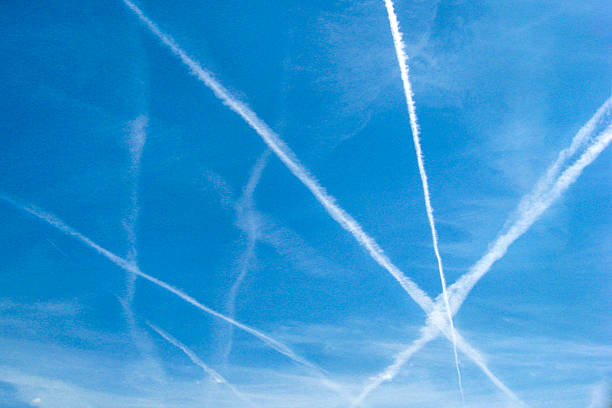 WHITE LINES GOING THROUGH MY MIND

Edward Menez has observed chemtrails in 90 countries and is convinced they are used in weather modification including unnatural droughts and floods.
"I stated looking up at the sky wherever I went, and soon I could "predict" what the weather would be on any given day based on how many chemtrails I saw that day.  I saw that chemtrails didn't make it rain at all--rather, I saw chemtrails dissolve an incoming storm, creating windy weather in its place."
by Edward Menez
(henrymakow.com)
I started noticing chemtrails around the time that 9/11 occurred.  That was over 20 years ago, and I don't know when this insidious poison began raining down from the skies.
At first the news media just ignored people who began proclaiming: "They're spraying us!".
Then, the news media started saying: "Oh, those are just contrails".  When it became too obvious to everyone that, no, those weren't just contrails, the news media said: "We're seeding the sky for rain clouds".
Now that we know that is also a lie, as there are still chemtrails all over the western half of the US and yet there is the worst drought there in a millennium, it begins to be clear to us that chemtrails are being sprayed above us for a more, insidious reason.
Bill Gates now claims that we need to "block out the sun" to prevent Global Warming.  Bill Gates also claimed the Covid-19 vaccines were used for immunity to that supposed flu-like disease.  The truth is that Bill Gates is a liar: both Covid-19 vaccines and chemtrails are being used as slow-kill methods to depopulate the world.  Both are poisons used to compromise your immune system.
Here: Chemtrail Pilot Blows the Lid Off OPERATION INDIGO SKYFOLD  a chemtrail pilot says: "First of all, I would like to say I do not agree with my mission assignments.  But what soldier truly ever does.  Several of us have considered bucking the ranks and going AWOL from time to time.  We are kept in the dark when it comes to getting honest answers about what we are really spraying.    Should they discover that we our our families are actively inquiring about so-called "chemtrails", then automatic and swift disciplinary action will be taken.....Indigo pilots are chosen from the the ranks within the Air Force, Navy, and Coast Guard.  Most of the pilots are "hardened to humanity" and could care less about killing off unwanted or leeching aspects of America and the world".
He goes on to say: "I only know a small fraction of the larger picture, as they compartmentalize everything."  He believes that the focus of their flights "will be moved to areas east of California and Texas in order to progress the drought further into the heartland".  The pilot feels ashamed for hazing over the skies and making them grey.
Kristen Meghan, an ex-Air Force employee who worked in Bio-Environmental Engineering, said she found "tons and tons and tons" of aluminum, barium and strontium being hidden in the records as to their usage and manufacturer name, and she was forced out of the Air Force because of investigating and exposing this.
Both the chemtrail pilot and Kristen Meghan are brave whistleblowers, but their accounts were from 2014--nothing has been done since then?
MY OWN STORY

A contrail from an airplane is water vapor and will disappear entirely within seconds.  A chemtrail, however, will linger intact as a long white line for many minutes, and then very slowly form into a hazy cloud-like form which makes a blue sky suddenly grey.

I stated looking up at the sky wherever I went, and soon I could "predict" what the weather would be on any given day based on how many chemtrails I saw that day.  I saw that chemtrails didn't make it rain at all--rather, I saw chemtrails dissolve an incoming storm, creating windy weather in its place.

This isn't just happening in the United States.  It's happening almost everywhere in the world in a coordinated program of genocide, just like the Covid-19 worldwide collusion.  I have been to about 90 countries in my life, at least 70 of them since 2001.  In almost every country I traveled to, I intentionally scanned the sky for chemtrails.
In most African countries, there are fewer chemtrails than in heavily-chemtrailed Europe and the United States (What a coincidence!  Just like the concentration of Covid vaccines), but there are chemtrails in Africa.  They are moderately heavy in Asia (including China), and they exist in almost every country I've visited.  There are only two countries where I tried to see chemtrails, but did not see them: Bhutan and North Korea.
CONCLUSION

There are many chemtrail websites, but beware of disinformation!  A good site I came across recently for photos of the inside of a chemtrail plane is: The Truth About Chemtrails

The spraying of chemtrails has thus far been accused of poisoning the air, water, and soil directly with barium, aluminum, and strontium.  Chemtrails have also been blamed for causing Morgellon's Disease, where tiny fibers start growing in a person's body.  Yes, these things lead to slow death.

Until blackmailed and bribed chemtrail pilots start coming forward and refusing to spray anymore, there will continue to be a cover-up.  The same situation applies to the employees of the COVID vaccine manufacturers.

Until the people of the world start noticing and speaking up about the existence and negative effects of chemtrails, they will continue to be used on us like we are rats.  The same situation applies to the recipients of the Covid vaccines.