The Money Power can be Defeated: The Swiss "WIR" 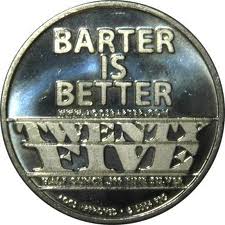 The Rothschild bankers are using  debt-based currency to enslave us. By failing to  adopt alternative currencies, we are accomplices in our own enslavement.

The WIR is a leading example that interest free mutual credit can be offered on a large scale.


For eighty years, a major not-for-profit, private currency has been operating in the heartland of Europe. In Zurich, almost next door to the Bank of International Settlements in Basel, there is the WIR, turning over the equivalent of almost 2 billion CHF per year.

WIR are the first three letters of Wirtschaftsring-Genossenschaft, which means something like "Cooperative  Economic Ring".

WIR was founded by businessmen Werner Zimmerman and Paul Enz in 1934. It was a direct response to the Great Depression. They built on the legacy of Silvio Gesell, whose thinking also was the basis for the famous Wörgl Scrip and today's German Regional Currencies, like the Chiemgauer.

Silvio Gesell is in fact the Patriarch of what I suggest should be called 'German Economics' or 'Interest-Free Economics', the theoretical basis for the anti-usury movement. His analysis of Usury inspired both Gottfried Feder and Margrit Kennedy, two other leading lights of the European anti-usury movement. He also had interesting and much needed ideas about land reform.

Where the Wörgl and the Chiemgauer were/are backed by national (banking) currencies, the WIR goes where nobody before dared to go: it is basically Mutual Credit.

Mutual Credit based currencies are now used in barter organizations world wide. Barter in this sense is a misnomer, they do use a means of exchange but not the national currency.

WIR is proabably the first Mutual Credit facility in the world and most certainly the longest surviving one.

Nowadays WIR turns over a little less than 2 billion WIR (1 WIR = 1 CHF) per year. Because many transactions involve maybe 25 to 50% in WIR while the rest is settled in CHF (Swiss Francs), real turn over generated by WIR is maybe up to three times higher. It has 1 billion of WIR in credit outstanding.

Transactions are settled with the use of debit cards or with their on-line banking system.

WIR is operated for the common good and not for profit. About 62,000 small and midsized businesses participate. There are six regional offices through the Swiss republic.

For our purposes WIR is important because it proves that Mutual Credit facilities have a viable business model. It proves currency can be offered at very low cost while maintaining a prosperous and professional organization over the long term.

Notwithstanding its major achievements, WIR suffers from some significant limitations.

In the first place, it is not convertible to other units. This is a common problem with Mutual Credit based currencies. Until recently, the technology was not available. Amazingly, many people are so used to this situation that they do not even consider it a problem.

They will claim that non-convertibility is actually a strength, as it forces participants to shop within the network. However, this is a mistake.

Non-convertibility damages the liquidity (what it will buy) of the currency and liquidity is everything. As a result, many businesses accept only certain percentages in WIR. This hampers liquidity even further.

Another problem is that consumers are not serviced. Only businesses can participate. This again badly damages liquidity: businesses cannot pay their employees in WIR, for instance.

Just think of what is possible for modern units leaving these limitations behind them.


Obviously, WIR is very important opposition against the Money Power. The Money Power can be expected to keep a keen eye on it and there are serious indications it has been actively resisting the WIR.

There is a persistent rumor suggesting the Banks have told WIR that things are fine as they are, but that they should not seek further growth. This may explain why they have not developed a comprehensive strategy for consumer participation.

Also, in the 1950′s WIR started to price its credit with interest. Even today interest rates are very low, with 1% rates for mortgages, for instance.

Still, interest is an affront to Gesell's ideas. It hinders circulation, which was one thing very much on Gesell's mind. The price for credit, even at 1%, is somewhat high for collateralized (and thus risk free) long-term loans.  It also lessens the power of the message: that interest free credit is not only possible but a fact.

The last few years WIR has been starting to focus on more traditional banking activities, including ordinary loans in CHF.

This has led Thomas Greco, a leading expert on Mutual Credit, to state that the Banking Cartel has probably found a way of getting its henchmen on WIR's board of directors.


WIR is a leading example that interest free mutual credit can be offered on a large scale. It's superior management was a key factor to its success: it was not a couple of dreamers that built it, but down-to-earth businessmen understanding the issues and the solution.

It is not convertible and it has no comprehensive strategy to compete outright on a full scale with the banking cartel and yet it turns over billions per year. These limitations can nowadays be solved. Convertibility for Mutual Credit is now possible. A comprehensive strategy including consumers not difficult to devise.

In this way, the Money Power monopoly on currency can be assaulted. Regulators, inimical as they may be to these schemes, are left empty handed: there are no laws against Mutual Credit and they are very difficult to develop, especially against determined market players who understand what they are up against.

Even though today WIR seems to have been subverted, it took the Money Power eighty years. If just a few thousand ambitious people world wide took their own initiatives, the Money Power could easily become overwhelmed.

It goes directly at the heart of the matter: the Money Power's control over the money supply and extortion through usury and the boom/bust cycle.

In this day of deflation and stagflation, additional working capital is desperately needed by small and mid sized firms. Now, more than ever, are they willing to take a chance when they are offered a real alternative.

The German Regional Currency Movement shows that it can be done even today.

In Britain, too, many regional currencies are now starting, most recently in Bristol. This unit is not even circulating yet, but already 100 small businesses have signed up. They desperately need additional cash and new customers and Regional Currencies supply both.

It is no use waiting until the Government cleans up its act. It never will. It is completely controlled by the enemy. Private initiative is the only hope we have.

Private currencies, competing with the Money Power in the market place is the way forward.

The world was conquered by a few ambitious men serving the Adversary.

It is now time that a few ambitious men, serving the cause of justice, do the same.

"THERE IS NOTHING MORE DANGEROUS THAN PERSONAL INITIATIVE: if it has genius behind it, such initiative can do more than can be done by millions of people among whom we have sown discord."
Protocol No.5

This article can also be found here:

Comments for " The Money Power can be Defeated: The Swiss "WIR""

No worries, we're all being forced into a credit based system anyway as cash is obsolete. We're reminded that Libya and other non-IMF controlled nations most probably had an equitable arrangement albeit with fixed low interest. Other than administration or R&D we don't have any need of charges for everything of possible use is already known, developed, suppressed, discarded.

I came across an NGO making substantial profits from carbon trading already. Transition Towns here are producing their own currency but these are part of the controlled UN agenda on sustainability.

Value for value is what i say, use silver & gold to trade with
nothing else is any good or makes sense.
Only EVEN exchange works, anything else is bullshit, fantasy.

"In this day of deflation and stagflation....."

So which is it? Sorry, can't have both at the same time.

And I always wonder what planet people live on who think we are undergoing deflation. Bought anything lately?

The reason I put it this way is because the main problem is that the economy is tanking because the money supply is shrinking. And exacerbated by speculative price rises in the primary sector (energy, food, commodities).

He's probably fooled by the hyperinflation scare generated by the zero hedges and other gold dealers out there.

Perhaps we should do another article on the current state of the economy, after we do the bank boycott thing next week?

Obviously the control of the money supply is the primary way the Illuminati control us; cause depressions, fund wars etc.

But we shouldn't be under the illusion that debt-free money equals great prosperity. What about production? You need to actually produce things people want to generate wealth. Here in Mongolia the economy is growing because of mining. Production is driving the economy. Without the mining boom, there would be no growth. The introduction of 'interest free mutual credit' would do nothing to help.

David is missing out Interest Slavery. 45% of our income lost to interest even if we have no debts because if interest passed on through prices we pay for everything. Even if we don't produce anything extra living standards for most people, most notably the poor, would double without usury.

And here is explained how the Money Power's control over the money supply allows them to control production (and thus productivity) through their Transnationals: