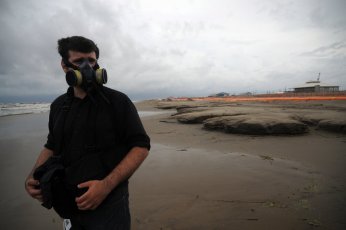 by Keith Howe, D.C.
(for henrymakow.com)

America is being attacked with WMD by land (Pesticide Fogging), by Air (Chemtrails) and by sea (Dispersants).

"Democracy Now has published a shocking interview with a top EPA official, Hugh Kaufman, who tells us that NOAA and the EPA are covering up the lethal effects of the neurotoxin pesticide dispersants and lying about Gulf Oil Spill water samples to save BP billions of dollars in fines."

Burning the oil mixed with dispersants will create many new toxic compounds to be blown by air and precipitated by rain on America! There is no scientific logic in using dispersants, and no logic in burning their toxic combination with oil, unless you want to cause more harm to the environment and population.

No doubt people in Florida are sick from the "Gulf of Mexico Syndrome" caused by the toxic oil, benzene, dispersants, and other hydrocarbon biproducts. However, the spinmeisters from the Sprayer / Slayer Corporations are apparently going to blame it on mosquitoes again, and begin another round of genocidal aerosol attacks on America, just like they did with the bogus threat from the West Nile Virus. Apparently the West Nile Virus has lost its' "Fear Factor", so they brewed up another boogie-bug at Ft. Dietrick, Dengue Fever.
"CIA-Army Conspiracy Leads to Florida Dengue Fever"

Here is an article on the West Nile Virus "Replacement Killer" for the CDC, Dengue fever.

Or maybe it really was infected mosquitoes.

A report from The New England Journal of Medicine, August 22, 1957, p.362 reveals that one of the first outbreaks of chronic fatigue syndrome was in Punta Gorda, Florida, back in 1957. It was a strange coincidence that a week before these people came down with chronic fatigue syndrome, there was a huge influx of mosquitoes. The National Institutes of Health claimed that the mosquitoes came from a forest fire 30 miles away. When the forest fire broke out, the mosquitoes all said, "Well, let's go over to Punta Gorda - there will be a bunch of people over there, we can have a picnic, and then we will go home".

The truth is that those mosquitoes were infected in Canada by Dr. J.B. Reed at Queen's University. They were bred in Belleville, Ontario, and taken down and released in Punta Gorda. Within a week, the first five cases ever of chronic fatigue syndrome were reported to the local clinic in Punta  Gorda, and it continued until finally 450 people were ill with the disease."

So it appears that both the problem, mosquitoes and infectious agents, as well as the cure, deadly pesticides, come right from military labs! Imagine my surprise.

If you don't think that your government would authorize the use of "chemical or biological agents"  on human beings, please note that "As approved by 105th Congress, 1st Session, 1998:

H.R. 1119, NATIONAL DEFENSE AND AUTHORIZATION ACT, SEC. 1078. RESTRICTIONS ON THE USE OF HUMAN SUBJECTS FOR TESTING OF CHEMICAL OR BIOLOGICAL AGENTS". For more details on how Congress declared YOU to be a human guinea pig for the Department of Defense, see this article.

Also a good article and video on Corexit to kill the "Useless Feeders" along the Gulf Coast and the elderly and retired in Florida. Mass genocide by spraying! Move over Bill Gates, with your vaccines, there's a new Slayer in town!

"In its quest for the Gulf of Mexico, the U.S. military innovation enabled it to seize control of Haiti within hours of its earthquake, then the entire Gulf after the "spill," and now, in secret maneuvers will soon include more U.S. coastal land and inhabitants according to WMR. (See, "Gassed in the Gulf Part I")

VIDEO: The BP "Gulf Syndrome": Benzene and Corexit Poisoning
The Government is Silent on the Human Health Risks

There is no rest for the wicked! Evil is never satisfied.

Looks like Isaiah 30:25- "in the day of the great slaughter, when the towers fall", is upon us.

This might be easier, graphs of bird mortality versus air pollution, on Staten Island.
http://harpub.co.cc/noxot/year2000/SIrefuge2000.htm
Or this WNV database study:
http://www.harpub.co.cc/noxot/wnvDBcty.htm

Henry, I think that we are all ready feeling the effects of this mass poisoning that is occuring as I write across the Northern and Western hemispheres. I live in Colorado and I have observed massive plant damage on a scale that I have never witnessed. Take a look http://www.youtube.com/watch?v=XwKVodw0VIM I'm even finding the same burn holes on my aquatic plants that are total enclosed and submerged in my aquarium.

Not, much this old Indian can say. If you had lived like the Tribes used to live upon the earth the oil spill in the Gulf wouldn't have ever happened. But now you have your stolen Indian land and your "Western Way of Life you enjoy so much.

Myself, I am just passing through your world.

One only needs to look up how Canada is governed to see that Canada is NOT an independent,
sovereign country.

Who is at the top of this pyramid ? Why the monarch, sovereign, Queen "Lizard" Elizabeth II.

The Queens Privy council for Canada advises the governor general. In the Privy Council Office (PCO) website one of the duties of the PCO is "Management of the Cabinet's decision-making system". Then why do we "elect" these people when all the decisions are made by the privy council and special interest groups. What a joke, the governor general appoints the Canadian prime minister. Most Canadians believe that we elect him or her.

Canada like Australia are "crown colonies" of The City of London Corporation (banking, business centre of planet earth), the Inns of Court (judicial centre of the common-wealth) and the British monarchy (royal prerogatives, letters patent). The super wealthy (Anglo-American-Jewish) oligarchy
loots the colonies and the rest of the world through force and fraud. That's how they made their money since day one.

Canada was a joint stock company way back, the Hudson's Bay Company (The Governor and Company of Adventurers of England trading into Hudson's Bay). America was also a joint stock Company (London Company, Plymouth Company). All were run out of the City of London Corporation using lawyers from the Inns of Court and giving royal charters by the Crown, sovereign.

I agree with Mr. Howe about mosquitoes being imported. I spent a lot of time in the keys when I was younger, we never had any mosquitoes because there is no fresh water for them to breed in.