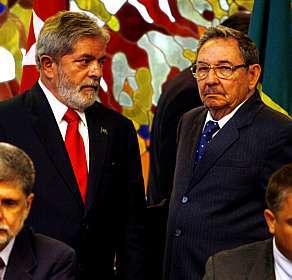 
From Marcos : Our San Paulo Corespondent

During the holidays, when Brazilians are resting and expecting a happy new year, President Lula and his gang of former leftist terrorists and bank robbers, now ministers of state, crafted and signed a law project that can very well turn Brazil into a Soviet Republic.

In an excellent example of Hegelian dialects and novilingua, the project tries to institute a "Human Rights National Program", a presidential decree #7037, from 21/12/09. Human rights, in this law, means anything that the government wants it to mean, and is an excuse to review all laws, censor all media, confiscate private property and abolish the freedom of speech. In one stroke of a pen, Lula wants to implement a total Marxist revolution that he was, until now, hiding from the people.

In Brazil, we had a military government that went from 1964 to 1987. The military coup prevented Brazil from falling into the hands of international Communism.

Of all the military regimes in Latin America, the Brazilian one was the softer. Most people remember this period as one of peace and tranquility. Brazil develop a lot, growing more than 10% each year.

However, there was still a remnant of Communist guerrilla terrorists in the country. They robbed banks, killed innocent people in cold blood, blew explosives in public places. A very small bunch was exiled, a smaller one jailed and a few tortured.

These are the people who are in power now, and they want revenge. Remember that this is a country where billions of dollars have been given as reparation to people who felt slightly disturbed by the military. A man who lost his leg in a Communist bomb terrorist attack got US$ 150 a month in a pension. The terrorist who blew the bomb  got US$ 200,000 as "reparation".

The government wants to make the Marxist terrorist opposition into a brotherhood of saints. Among the actions in the project:

- the revision of all "crimes" committed by the military, but complete amnesty to all terrorist attacks, murders and robbery from the left.
- exclusion of the names of military men involved in the government from all public places.

There is a heavy attack to the agribusiness, and support to the Marxist revolutionary movement of the Landless Peasants (MST), most of them professional activists who can't plant a carrot if their lives depended on it. This criminal organization which has invaded farms, killed cattle and people and destroyed tractors and plantations has been funded by NGOs with government money:

- creation of "soviets" or Maoist committees to judge all property invasions regarding "human rights", before the Judiciary can do anything,
- the act of invasion automatically changes the property status of the land. 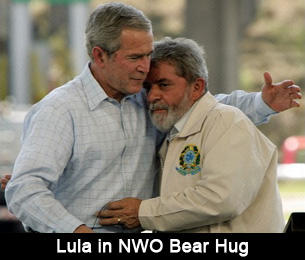 Brainwashing actions are also in order:

- revision of elementary schools' books regarding "human rights", from the government perspective.
- funding for studies, learning materials, research and institutions which deify the left during the military period.
- institution of the subject of Moral and Civic Education in Human Rights in all schools.
- revision of the curriculum of military prep schools in the perspective of Human Rights. (to destroy the Armed Forces).

- Protection to prostitutes and "quilombolas". (a person who just says he is a descendant of slaves can have property of land where the slave allegedly lived).
- Enforcement of gay marriage, abortion laws and adoption by gays.
- prohibition of the display of religious symbols (crucifixes) in public buildings.

One might think that the people would be in the streets. No, peaceful sheeple of Brazil is asleep. Lula has a movie about his life, a piece of Mein Kampf propaganda, in 500 theaters. Political propaganda of this kind is prohibited. The movie was funded by a pool of companies all of which benefited heavily from loans and grants from the government. Now the Marxist unions are going to pay for the people to go watch it.

As I said before, Lula sold Brazil to the New World Order. The man has been chosen by the French news media as the Man of the Year. Now he is going to give the coup de grace and betray his own country for good. The world and especially the Americans must know and understand what kind of man he is.

Comments for "Marxist Dictatorship in Brazil"

You should really check facts more before allow articles to be posted. Most of what is in this article is unfounded speculation. Regarding the signed law, it is already under review by Lula for a repeal of the sign. These facts seem to be omitted by your writer, think about. The supposed prohibition of religious symbols, does this mean the tearing down of the Christ statue in Rio. I think not.

I live in brasil, work here and have a family here as well. Your writer comes from a wealthy Brazilian family, that is apparent from the assumptions made, and is worried he might loose something. Most of these so called wealthy families are the ones that were stealing the land 30 years ago. Keep your reporting in the states where you may understand things a little better. NO AMERICAN can ever understand what it is like to grow up and live in this country without actually living here. Stop being part of the false propaganda machine, please.

The author does not come from a wealthy family. he is not a Communist.

Hi Henry, I am currently vacationing in Brazil.

This is not directly related, but I thought this was amusing. I have a group of friends among the higher class, and we were having a few beers and talking.. One of them said something about "niggers", and used that term.. I was quite surprised.

Secondly, and I have seen this a few times, I am dating a German/Brazilian girl.. I recognized her last name as German and asked her about it. She was so ashamed that she tried her best to downplay even being german. Of course this was related to the holocaust, which is talked about here constantly.

I believe the thought laws are also attached to calling someone a derogatory name if they are gay.. While out last night, my girlfriend and I were at a cafe, and 2 lesbians were sitting right next to us,(It seems I see almost as many gays as straights), and they would not stop staring at her, interrupting our conversation, winking, flirting, etc.

She is repulsed by lesbians and gays, and this made her feel very uncomfortable so we ended up leaving. But I guess my point is that the those lesbians at least were so brazen and rude in their attempts even though she is obviously with me, but if I said something about lesbians, perhaps that could also be a hate crime..

This country has many problems with poverty, crime, and even murderers go free after a short time. So it is interesting that they waste time with these "thought crimes", even though everyone knows the cast vast majority of crime is black people attacking whites, tourists, etc.

Hi Henry! Feliz ano nueva! Now we know why the Rothschilds are heavily invested in Brazil and why the Olympics is being held there. First Brazil, then the U.S. Fascinating to watch. Guess I better forget Spanish and learn Portuguese.