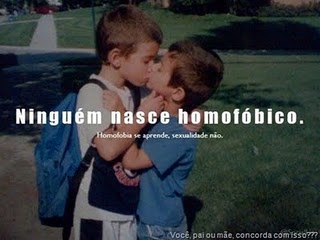 This picture is from the government material for the junior high schools.

There is a shadow hanging over democracy and basic human rights in Brazil. Its name is Law PLC122.

If this law is approved, any kind of moral, religious, philosophical or medical opinion against the homosexual lifestyle will subject the author to prison and heavy fines. Not only in the commercial media, but also in blogs, religious programs and even private conversations. Since the days of the Nazi Party and the Maoist Cultural revolution, we havent' seen such a blatant attack to human rights in this scale.

The radical movement is taking advantage of the momentum produced by the approval of gay civil unions by the Supreme Court last week, in an illegal usurpation of the function of the Congress. The law disrespects the Constitution, which could only be changed by the majority of Congressmen. Now the gay activists are planning a march for the bill in Brasilia, funded with money from NGOs, in order  to coincide with the Global Anti-Homophobic Day in May17th.

A heavy media campaign has been in course for several years, where only pro-gay news are shown in the newspapers. A huge campaign of desensitization has also been promoted by Globo TV, through their soap operas, watched by the majority of the population. Most soap opera authors are either openly gay or communists. They have introduced during the last years romantic gay couples, stories of gays under persecution and finally gay French kisses, in what can only be described as social engineering. This month, they had a scene where a daughter reprimands his father, saying he could be arrested by telling his boss is "fruity", "because there is a new law coming".

A practical example of partiality was the wide coverage of an attack on a gay person by a punk, in Sao Paulo. Even if there was no evidence that the attacker knew the victim was gay, and that it occurred after midnight, in a dangerous situation for any person, this was debated for weeks on end. Most crimes against gays people in Brazil are committed by their own partners, or are related to drugs or prostitution, such as the case  with transvestites (usually both addicts and prostitutes). There is almost zero real homofobia in Brazil. In my whole life, I have never seen a gay person be bullied.

On the other hand, we have seen several gay pedophile attacks (rapes and murders) on children, even by teachers inside schools. These are often neglected by the media and, when published, the journalist never writes the word homosexual.

Even this week, a large mall in a fashionable area in Sao Paulo had to put a security guard inside the bathroom, because gay men were having sex in public.

Their next move is to promote the "gay kit", a serie of DVDs  produced by the government, showing explicit gay behavior in kids, to be shown to junior high students, in order to incentive the gay lifestyle. In the future, nothing will be impossible. Medical news, such as the recent study showing that gays have double the incidence of cancer, will be censored. Conservative blogs and religious radio and TV programs will be outlawed. If you fire a lazy, incompetent gay employee, you will go to jail. If you don't hire a gay person, you go to jail. If you quote a Bible passage about homosexuality, you go to jail.  If you complain about two guys making out in a restaurant in front of your kids, you go to jail (the law specifically says so). The contents of this article would be enough to put me in jail. Society will be at mercy of a special caste, with special privileges. Even this week, a large mall in a fashionable area in Sao Paulo had to put a security guard inside the bathroom, because gay men were having sex in public.

The government, deeply involved in weekly corruption scandals in the order of billions of dollars, welcomes the distraction.

The international media has treated Brazil as the next wonder in the world, especially after the Marxists took over the country. Don't be deceived. Brazil is one of the leading countries in the march to the new world order and the total destruction of moral and family values, a place that will make North Korea look like the land of the free.

Sounds like hell on earth. The author's anger is palpable; you can sense it, between the lines.

I wonder what such "artists" will think of themselves when God "expresses Himself" by sending them to Hell.

The first line from the quoted paragraph, when you turn it over in your mind, just does not seem real. And yet, there it is. You know that all this is not going to go on much longer. And it will be God Who puts a stop to it, not us.

The text and its comments are true and accurate. Nothing else to add.

After the military rule ended in 1985, Brazil has gone through such moral decadence that nobody could ever believe life used to be so much nicer, peaceful and more hopeful, and how filthy it is nowadays.

People are soaked in hedonism and in the bread and circus opium (thanks to the communists the military used to hate - and they still do). Unfortunately, the military will not make any move this time - the "allies" would drop tons of bombs over our heads to guarantee the new world order if they overthrew the reds, since embargos would not cause much effect (and our once proud armed forces are wrecked by budget cuts).
Former military presidents used to live and die in spartan, simple and modest ways of life. It is called virtue.

The communists have become millionaires overnight. Communism is corrupt from its roots to the highest leaf.

Most of politicians are double-faced free-masons and satanists. The Church, infiltrated by them (besides the communists), is too concerned about ecological, feminist, communist, illuminati agendas instead of guiding souls through true values toward good moral and religious practices (except for the traditionalist branch minority - the one that warned us about the communist threat in the 1950's and 1960's).

Drug legalization is next. Other crimes are unpunished: if one murders, he will spend about 6 or 7 years in jail only (if he is ever caught - all in the name of freedom, after a long, long criminal procedure); if one fails to pay child care, he is jailed for up to 3 months among dangerous inmates...at once!

Emasculation is a serious business down here. Women want to rule but their authority does not oblige them with any responsibility: whatever goes wrong, they just take the nearest male to court and sue him. If a man ever disagrees with his wife, his marriage is doomed to a divorce (unless he wants to have sleep deprivation, endless quarrels, blackmailing - with his own kids help manipulated by their "poor" moms, etc.). Women say it is either their way or the highway...On the other way, men bear all the responsibility with no authority whatsoever. No wonder they only want to have fun with the sluts (a dangerous thing to do).

Here, freedom is the stairway to hell. Freedom (abuse) is the gateway to the communist agenda. It is the marxist-gramscist cultural revolution. All we have to do is watch TV and its perverted soap operas (=brainwashing) to know what is coming next (in terms of political agenda).
And now we have this gay thing.

We are tired of everyday revolutions that lead us down to hell. Helllllllp!

However incredible it may sound, the information in the article about the gay revolution in Brazil is correct. The only palliative to this otherwise sickening panorama is that nothing is taken seriously in Brazil, as long as the money keeps flowing. I doubt anyone goes to jail for more than one night. It is more likely intended as a powerful tool for blackmailing or intimidating Christians and political opponents, much in the same fashion as the ADL.

Thanks for posting the article. My friend, Brazil is lost to international Marxism. Only this week, we have seen:

- The WWF and Greenpeace NGOs have prevented the voting of a new ecological/agricultural law, imposing through their friends in the government one version which will destroy Brazilian agriculture,

- The government bought 500,000 books on Portuguese teaching to the public schools, where we learn that "education is a form of oppression", and that writing and speaking wrong is alright. If you insist on speaking correct grammar, you suffer from "linguistic prejudice". This is now taught in schools.

- The President Chief of Staff has multiplied his fortune twenty-fold in two years. The government won't do anything.

- The files found in the FARC's leader notebook were opened to the press. Chavez sent US$ 300 MM to the terrorists and asked the FARC to kill opposition inside Venezuela. The FARC sent money to help in the election of Lula in Brazil and also the election of Correa in Equador. FARC had several bases inside Brazilian territory and had several meetings with people from our government. Last month, Veja magazine showed that Arab terrorists have free range in Brazil. Unfortunately, Rense posted a piece of disinfo about Chavez last week. Chavez is a monster.

- Dilma has cancelled meetings because of "pneumonia". She flew to Sao Paulo and had a catheter inserted in order to administer antibiotics. This is probably a recurrence of cancer. The vice-prez is a Satanist, according to numerous sources.

Thanks for helping people open their eyes.