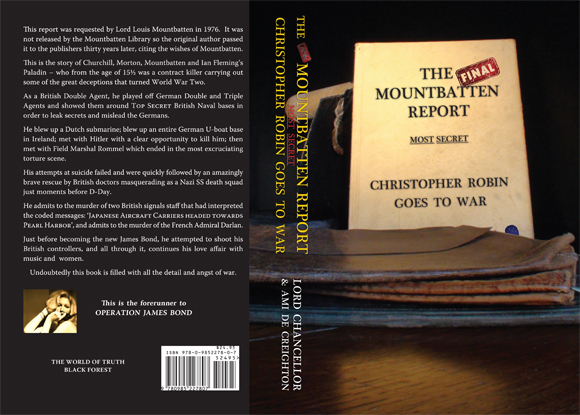 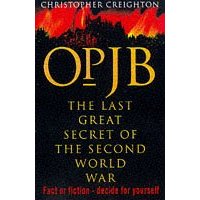 "OpJB" by John Ainsworth-Davis, the model for James Bond.

My review of OpJB "Bormann was a Rothschild Agent-Damning Evidence" appears here.  (Read this if you haven't already.)

The new book  is a sequel only in terms of publication dates. It describes events leading up to the Bormann rescue, some covered in OpJB, some not.  To my contention that this sequel contains little new information of significance, Greg replied as follows:

First of all, 'The Final Mountbatten Report' is the confessions of the sins of a James Bond agent. It includes all of his training, which bounced from training camp to operation to sex to training camp - which is the Intelligence way.

John Ainsworth-Davis was an orphan in that his parents divorced and his mother made the mistake, misfortune, or opportunity to live on Churchill's estate - Chartwell. From here he played with Winston Churchill who was apparently in his Wilderness Years, but it was more like [Churchill] was training young children to be the war heroes he dreamed of. 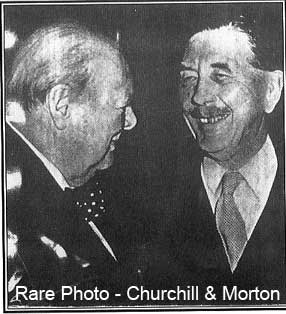 [Churchill's friend & Intelligence chief]  Desmond Morton, left,  became his uncle and the two of them, Morton and Churchill became the Mind Control agents of a young, tall and extremely athletic and trusting boy.

Having gone to Ampleforth College, he had an adulation for authority, and this was to place him in the most dangerous situations - as one of the youngest to be the meat in the sandwich of the Secret War that was fought during World War Two.

From today's point of view, it's unclear what the goal of the Secret War was, but then, there was lots of Double Agent and Triple Agent activity, and sometimes even they didn't know which they were playing.

At some point, in the well-recorded fear of it all, there was the Two-and-a half Agent who just wanted to get out.

Those who pulled the strings were putting the lives at risk of young trusting players, who from aged 15 to 21 influenced successive intermediate outcomes of World War Two to the extent that it cannot be disregarded by any historian.

Even at death, after WWII, German agents were buried on British soil with full Nazi Honors, then again with as much British Honor as could be mustered and confused. So even after the war, it remained unclear as to which side some of these agents were on. This included, at times, John Ainsworth-Davis, who had the clear and present opportunity to kill the real Hitler, but failed to take action.

Written from a firsthand viewpoint, and written from behind the barrel of a pistol with two hands trained in nine-second killing, it is, at times, overwhelmingly heart-wrenching what Morton and Churchill put this teenager through; and heart-wrenching that 70 years after the events, a new series of targets, hand-placed bombings, assassinations, and British agents murdering British agents is revealed.

The purpose was to get more countries involved in the war, and to ensure that 'the Axis Forces secrets gained' were not known by the Germans. The result was extended and expanded small battles, with the Allies winning the larger battle - the War.

There are some corrections in history from this British Public School-boy contract killer, for murders in which a French Admiral was executed, but this Britisher did the killing dressed as a French Naval invalid, and speaking the minimum of French. These are confessions too late to save lives, and delayed to ensure the desired outcome in history, but perhaps just in time for the next round of covert-counter-intelligence, to act as a warning.

John Ainsworth-Davis murdered Admiral Darlan. He also murdered a male and a female British Signals Staff over Pearl Harbor, which Davis helped to create. His version in this book, is more honest and more detailed than in Op JB. [They were demanding to know why information about the Japanese attack had been suppressed.]

Davis explains firsthand how he set up those murders, what vehicles he used, his hand movements, the explosives, the cover, and the details of his path too and from the War Room.

John Ainsworth-Davis, whose nom de plume is Chris Creighton, requested that this manuscript be published overseas, away from his home in Spaniard's Hill, London. His agents, who are more or less his peace-time intelligence controllers, have done their best to suppress this book, because it tells the story by name of the true characters, whereas Brian Garfield tells a similar story fictionalized. [Richard Meinertzhagen]

John Ainsworth-Davis wasn't too happy about the fictionalization, so he wrote 'The Final Mountbatten Report' to set the record straight.

This implicates the high-end British military controllers, and takes the confession of Lord Louis Mountbatten for his slaughter of 3,500 Canadians at Dieppe. It is the only confession of his we will see, but it alludes to Mountbatten being a leak to the Germans which cost many British and Allied lives.

Written in a casual firsthand way, the Index shows just how much ground it covers. The Editor has written an Appendix which explains how the Double Agents were actually Triple Agents, and much of the Secret War activity was self-sabotage to extend the war, which, if the Banks/Banksters weren't involved, would have been all over at Dunkirk - a kind of build up and non-war - like the Cold War which started straight after.

The training and operations leading up to Operation James Bond is explained. The torture scene in Lower-Normandy is excruciating and the rescue by British Medical Staff is one of the bravest on record. This provided them will a full view of D-Day from a British Bunker on the German-controlled French beaches.

It's good to get firsthand accounts because it shows that all D-Day landing movies are actually propaganda fakes. The German resistance was focussed elsewhere - largely due to the work of John Ainsworth-Davis, who suffered torture worse than James Bond in an open bottomed caned chair, then finally told the truth, which was the lie, which allowed the Allies to land in Europe and take Germany in 10 months.

Of course, Operation James Bond then undid a lot of that good effort by extracting Hitler's Secretary Martin Bormann out of Berlin (John Ainsworth-Davis again) and his Commander Ian Fleming then extracted Adolf Hitler out of Berlin in the attached Operation Winnie-the-Pooh. This was all done in exchange for the Swiss Bank Accounts, and 95 % of the Art, Jewelry, Gold and Money was then returned to the Jews. Bormann then lived in England, as John Ainsworth-Davis explains in detail, even on video, and Hitler lived in Spain under the protection of Operation Safe Haven, which was the same name given to the return of the artworks.

Still, like an agent, he writes the truth, while covering the truth, as though he had sworn a blood-oath never to reveal, and then taken orders to write it just as it occurred . . . and this is exactly what did happen, on both counts . . . as stated in the opening pages.

For those who still have some outstanding questions, and guesses, the Editor interviewed John Ainsworth-Davis in his London home and the response to "The Black Angel" is very real. It was not Desmond Morton and it was not Churchill, although John Ainsworth-Davis, on having had enough, and the love of his life tortured to death, he did get inside the War Room armed, with the intent to kill both.

This was the book John Ainsworth-Davis put out, outside of the influence of his agents, which would explain why he wanted it published overseas and why it is silently rendered 'unavailable'.

If we were to put John Ainsworth-Davis on a modern scale, he is old-school surrounded by suppression, who wants the truth to get out, a truther with a touch of the upper class, who knows what he knows, admits he doesn't know events outside his own personal experience, and has a healthy mistrust of MI6.

Very little of this book is manufactured and any themes repeated come with more light.

MAKOW COMMENT: For me the irony of this book is that J A-D murdered patriotic servicemen who were privy to the Pearl Harbor deceit, and then saw Morton deliberately sacrifice his fiance Agent Patricia Faulkner to Nazis torture and death because she had stumbled onto the truth, that both Hitler and Churchill were Illuminati perverts working against humanity.

Related - Hallett on the "Black Angel"

I am convinced this is Morton. Hallett thinks it's some kind of supernatural entity.

The cognitive dissonance in which they spend their lives will simply
not permit it.

Maybe you should poke a little fun at these morons. Call them double-double agents. This reads a little like an episode of Get Smart - which is probably more realistic than James Bond.

Greg Hallet writes in his article that;

... "Operation James Bond then undid a lot of that good effort by extracting Hitler's Secretary Martin Bormann out of Berlin (John Ainsworth-Davis again) and his Commander Ian Fleming then extracted Adolf Hitler out of Berlin in the attached Operation Winnie-the-Pooh. This was all done in exchange for the Swiss Bank Accounts, and 95 % of the Art, Jewelry, Gold and Money was then returned to the Jews." ...

Well, wasn't the most priced commodity at the wars end the A-bomb? There is more and more information coming out of Germany, Japan and other places, that Hitlers scientists was ahead of US regarding a functional nuke, and that Hitler bought his freedom in exchange of the bomb. Also why should the Jews controlling the central banks, including the FED, have any use for money? Couldn't they then as now print all the money they want, or then as now give their minions in governments order to make them a bail-out in trillions of dollars? Art and Jewelery might have some affectional value to the Jews pulling the strings, but logically not money in case they ca print all they want. Also should we not take Mayer Amschel Rothschild on his word when he says: â€œGive me control over a nation's currency and I don't care who makes the laws.â€

The Swedish-German business attorney-at-law, Dr. Henning Witte, runs the multi-lingual site White-TV who have a lot of information on the indications of a Hitler-deal on Nazi nukes. Here one such posting in Swedish (you have to use Google Translate to make it to English):

Regarding the flight of Hitler and Bormann, there is several scenarios. Below a link to such a scenario elaborated from an e-mail sent by Greg Hallett (there has since come out information from Argentina and Germany who points out that some details in this scenario might not be correct):