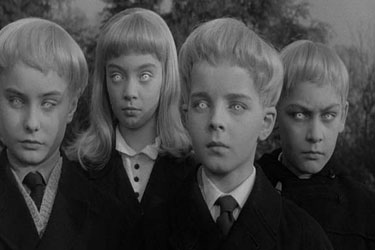 left, scene from "Village of the Damned"

"Education that prepares students to accept a cog-like existence in our military-industrial-social-welfare-regulation complex is ideal."


Excerpt from "The Occult Technology of Power," which purports to be a manual used to instruct an Illuminati heir, published in 1974. Internal references suggest that it was a work of imagination based on extensive study. Most of it is consistent with my conclusions.


In order to maintain our system of power, the institution of universal public education is indispensable...

The primary purpose of public education is to inculcate the idea that our crucial institutions of coercion and monopoly were created for the public good by popular national heroes to blunt the past power of the malefactors of great wealth. Crucial is to create the impression that, although the people have been exploited in the past, today the wealthy are at the mercy of an all-powerful government which is firmly in the hands of the people or do-good liberals...

Centralization of control [of education] at the state, or preferably national level, assists in building the climate of opinion we require in public education. Failing to obliterate local control, other methods nearly as effective are available.

Our overwhelming financial clout in the publishing industry can induce relatively uniform textbook selection. Further leverage can be created by promoting teacher colleges and teaching machines. National teacher's associations and unions are also an excellent power base from which to foster our programs of indoctrination.

With our great influence in publishing and publicity we are able to, selectively popularize educational theorists whose views are incidentally beneficial, compatible, or at least not in conflict with our own goals.

This way we obtain sincere, energetic activists to propagate our desires without having to reveal our motives or even existence. We do not want an educational system that produces hard-driving individuals bent on amassing great wealth and power.

Therefore, we discourage education that would develop the potential powers of students to their fullest. "Liberal" education that stresses knowledge for its own sake or even sophistry and sterile mental gymnastics is of no danger to us.

"Relevant," vocational, or career-oriented education also poses no danger to our power.

Education that prepares students to accept a cog-like existence in our military-industrial-social-welfare-regulation complex is ideal. Progressive education with its stress on "social adjustment" also produces the conformity we require of our subjects.

Emphasis on competitive sports may produce a certain amount of disruptive competitiveness among the participants, but primarily has the effect of creating life-long voyeuristic spectators who will enthusiastically sublimate their competitiveness into endless hours of following college and professional sports on the boob tube. Space spectaculars and dramatic political infighting are also marvelous diversions with which to occupy the masses.

Anyone seeking social change will gravitate to the field of education. Our strategy is simple: Let only those succeed whose influence would be compatible with our power. Encourage all who would develop the passive or receptive mode of existence. Discourage all who promote the aggressive or active capacities.

Build a great cult of salvation through endless education, touting it as the "democratic" path to success Deride the frontal approach to success of the "outmoded' rugged individualist.

Before yielding the floor ... I would like to comment on the demise of religious education as a vehicle for social control. Religion, in its time, was a remarkable weapon for inculcating subservience, altruism, and self-abnegation among our subjects. We did not give up this weapon voluntarily.

Your grandfather, for one, supported the Baptist faith well after most finance capitalists had turned wholly to secular ideologies. However, a trend toward rationality in human affairs plods along inexorably quite outside the reach of our power.

Only in our totalitarian dictatorships can this trend be quashed entirely. In the semi-open societies in which our money power is based, the forces of reason can only be impeded and diverted. Some have theorized that, eventually, widespread rational egoism will overturn our order. I am confident that secular faiths and just plain confusion will suffice to sustain our power for many centuries to come.

Most learning is not from rigid instruction. Real learning comes from unrestrained participation in some meaningful setting and not from some forced ritual of elaborate planning and manipulation like the school sets up.

According to Ivan Illich in "Deschooling Society," the lie in the reasoning for forced education is to get us to agree that “children belong in school, because they can only be taught in school.”

Illich says, it is—

“…schooling them to confuse being taught with learning; grade level advancement with education; and a diploma with competence.”

The first step in breaking the cycle of mandatory education is to make people, especially the children, aware of the ritual of obligatory education which is very intentionally creating consumers of goods and services.

In a just world, a good educational system should provide access to available resources at nominal fees and at any time during the lives of people who want to learn. It would empower all who want to share what they know to find those who want to learn it from them.

A healthy student’s resistance to teaching comes from the manipulation to make them believe one person’s judgment should determine what, when, how, and where another person must learn. Our future as a nation depends more upon our choice of institutions which support a life of spontaneous, independent action and learning. Instead we are oriented towards new ideologies and technology’s development.

Indeed our country has been enslaved by the so called education system. They have destroyed our youth and our Country. I went to a public school and it took me ten years to see what they did to me. In order to save America we must abolish public education. Though will it happen? Let us pray we now lead the world in crime, drug use, police, illegal drug use, obesity, car thefts etc. The people in control of our schools should be arrested, tried and once convicted by a jury of their peers but in jail. Henry I love your work thanks for your efforts.

Your article reminded me of a book exposing the deliberate downfall of the public education system.

Charlotte Thomson Iserbyt wrote a book called "The Deliberate Dumbing Down of America" that would seem to relate to this article in showing that what happened to the public education system was deliberately planned.

The author has made her book available for free on her web site as a PDF file you can download:

I have not had a chance to finish reading the book yet, but given her prior position as a former Senior Policy Advisor in the Office of Educational Research and Improvement (OERI), (U.S. Department of Education) I would think that she would know what she is talking about.

I went to public schools till Grade 11 and had the highest marks in my class. In Grade 12 in the private Christian school I nearly failed because those private school students were light years ahead of me and all the other boarding students. Public schools know this to be true but will never imitate the private schools.

Instead they lambaste them at every turn, especially home schooled students. Yet around a quarter of public school teachers hypocritically send their children to private schools.

Last night, I had a dream in which I was in a college classroom with my fellow-students, and we were each given a slip of paper containing a summary of the American Psychiatric Association's 1973 decision to remove homosexuality from the APA's official list of mental disorders.

The principal of the college sat on a high chair to the side of our table, and he called us each in turn to give him our own individual explanations about how we understood the APA's 1973 decision.

As someone who is deeply involved in reorientation therapy, I wasn't quite sure what I would say to the college principal about my beliefs. Should I lie and say that I agreed wholeheartedly with the APA, or should I tell the truth and thus get myself kicked off the course?

I didn't understand the meaning of this dream until I read your article this morning. Everything makes so much more sense to me now. Thank you so much for helping me to see the education system for what is really is.