Egypt: Setting the Stage for WWIII? 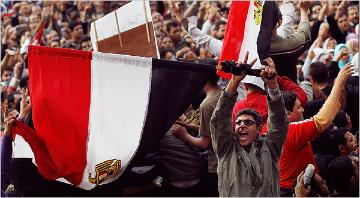 US "To DO" List Begins With Muslim Brotherhood (link below article)

In order to make sense of the day's headlines, we need to recall the big picture. Long ago, the London-based Masonic Jewish (Illuminati) central banking cartel realized that to enslave humanity, they needed to use guile.

Their unvarnished goal would meet universal opposition; so instead they fostered myriad needless conflicts in order to divide and conquer.

Their main strategy was to use their control of both sides to foment gratuitous but extremely costly wars. The First World War, Second World War, Cold War, Korean and Vietnam Wars etc.  were all means of increasing their power and wealth while debilitating humanity in countless ways, including death, destruction, demoralization and debt.

The Illuminati may be setting the stage for a new world war. The template for the popular uprisings in Tunisia, Egypt (and potentially Jordan and Saudi Arabia) is the 1979 Iranian Revolution. Here the Illuminati replaced a loyal puppet, the Shah Reza Pahlavi with the "fanatical" Islamist Ayatollah Khomeini resulting in the  trademarked "Clash of Civilizations." This is documented in Robert Dreyfuss' book "Hostage to Khomeini."

Now they may be replacing loyal puppet Hosni Mubarak with a Muslim Brotherhood/ Islamist regime, ratcheting up the tension, and oil prices.

All our "leaders" are essentially stuffed suits. They're puppets. (The role of the media and academia is to legitimize them.) The masses do not rebel unless they're organized and financed by Masonic bodies like the Muslim Brotherhood who serve the Illuminati bankers. This is what happened in the American, French and Russian Revolutions.

All of this is bad news for the ordinary Jew-on-the-Street in Tel Aviv. It presages another major war in the Middle East, possibly heralding a world war.

It is not bad news for the leaders of Israel or America, who are Freemasons just like the Muslim Brotherhood. These "leaders" want a deadly conflagration: Masonic Islamists vs. Masonic Zionists! They're all satanists sticking it to humanity.

Have you noticed how calmly Israel has accepted a Hezbollah government in Lebanon? All the better for war!

"The Third World War must be fomented by taking advantage of the differences caused by the "agentur" of the "Illuminati" between the political Zionists and the leaders of Islamic World," Masonic Grand Commander Albert Pike wrote in 1871.

"Agentur" means "agent." The same term is used in another Illuminati document "The Protocols of the Elders of Zion" which dates from the same period.

The key point here is these wars are contrived. They are "caused by agentur of the Illuminati" on both sides. These agents owe their first loyalty to the Illuminati not to their countries.

Their aim is to destroy their respective countries and profit from the carnage. Pike continues: "The [third] war must be conducted in such a way that Islam (the Muslim Arabic World) and political Zionism (the State of Israel) mutually destroy each other."

The rest of the world will be drawn in. "Meanwhile the other nations, once more divided on this issue will be constrained to fight to the point of complete physical, moral, spiritual and economical exhaustion..."

At this point they will be constrained to accept the Luciferian one-world government.

So this is the hidden agenda which explains our leaders' reactions to the demonstrations in Cairo. The Israelis give support to Mubarak because it is the kiss-of-death. But the Americans discreetly signal for him to go, better to advance the Illuminati's lethal hidden agenda.

This article - Tunisia & Egypt- Manufactured Crises?  has been very helpful.

Comments for "Egypt: Setting the Stage for WWIII? "

"Dr. John Coleman, a former British Intelligence agent...states in his report on Iran's Islamic Revolution that the Muslim Brotherhood was created by "the great names of British Middle East intelligence"...and that their mission was to "keep the Middle East backward so that its natural resource, oil, could continue to be looted..."
http://www.topix.com/forum/afam/TK78UBJ6CK4B2GPOI

In Egypt, food is a highly political issue. The worldâ€™s biggest wheat importer, where one in five people lives on less than $1 a day, provides subsidized bread for 14.2 million people.

United Nations figures showing world prices pushed above their highs of three years ago in December has sparked a wave of unease throughout the heavily import-reliant region as governments looked to stave off domestic inflation.

Right out of the French Revolution playbook.

But look at the lies in Wiki:

Adherents of most historical models identify many of the same features of the Ancien RÃ©gime as being among the causes of the Revolution. Economic factors included hunger and malnutrition in the most destitute segments of the population, due to rising bread prices (from a normal eight sous for a four-pound loaf to 12 sous by the end of 1789),[3] after several years of poor grain harvests. http://en.wikipedia.org/wiki/French_Revolution

In Webster's The French Revolution between footnotes 17 and 18, "[T]he Duc d' Orleans deliberately bought up the grain" and Pierre Beaudry in Why France Did Not Have An American Revolution shows that the grain was shipped to England.

Though I agree with the analysis, indeed, this may be a setup for things to come such as the WWIII scenario described of by analysts like M. Chossudovsky. The events of Egypt actually shed light on the 1979 Iranian Revolution. Its a bit hard to get around "the West" supporting the Ayatollah's rise to power (as analysts like F.W. Engdahl have suggested) but makes much more sense now. They supported the Shah, who outlived his usefulness and then supported a change in regime for the Ayatollah. They supported Saddam, who outlived his usefulness, and then changed the regime. Same for Egypt. Gotta throw the people a nominal bone once in a while, eh?

Now we begin to see it.

As you know I've not freaked out over all the false alarms of "WWIII" anent the Middle East since the 'good ol days' of summer of 2003 - 2009. The reason I agree now that war may be 'on the table' for the first time since 2003 is that the economics is now in place -- there's global depression, going into 'stagflation'. The public in the US, Mexico, and South America are neutralized with long faces. Vulnerable, perplexed. Seems the world is ready for another swift kick in the nuts by the NWO....

Follow search, "NATO + Egypt" My hunch is that the State Dept. has to get NATO back into the Middle East. I think the Brit SIS is the hand in the Muslim Brotherhood puppet. Britain wants to get NATO to proxy in Egypt long enough that Israel and the US can pull off their air strike to set back Iran's missile capability.