Freemasonry: "How the World Really Works" 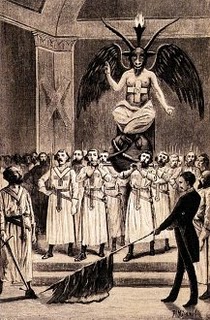 "My education into how the world really works came from my father, a former soldier and career criminal."

I read your recent article on the young man who refused to join the Freemasons with a great deal of interest. I may be able to add some information for debate.

I am a man in my mid forties born and raised in the UK currently living in Asia. I am a former British soldier and have served with an intelligence unit during the Cold War and a couple of special forces units, including one during the first Gulf War.

I have lived and worked in many countries..  My education into how the world really works came from my father, a former soldier and career criminal. He was responsible for a number of armed robberies just after he left the armed forces and got involved with a group of ex-soldiers, some of whom were Masons, carrying out crimes in a major UK city.

He always told me that the law enforcement agencies and the government, were guilty of far worse crimes than he could ever commit. He would regularly receive drugs from the police and do time in place of his Masonic comrades for payment.

He told me to never get involved with the Masons. [He said] that power and policy was maintained at local community levels through the lodge. He also informed me that the Queen owns munition factories in the UK that sell arms to various countries and organizations around the world.

My education was continued during my service when I had the privilege to meet and befriend a high ranking member of the S.I.B. military police. No mention of Freemasons ever came into our conversations until one evening.  He begged me to never join the Masons. He explained that his career was at an end because of his own refusal to join. He had no regrets as he believed "his soul was more important than privilege" (his words not mine.)

One of the cases my friend in the SIB worked on, and the first case that led him to dislike the Masons, was during the 1970's. A string of armed robberies in London was suspected to have been carried out by serving members of the British military. A joint task force was set up between the Met and the military police. It was discovered that serving members of the 2nd Battalian Royal Green Jackets had carried out these crimes with orders to do so. Masons within the Met squashed the investigation due to connections to their organization.

I was invited by a couple of Masons to come to an "open day" at the Lodge and I took it to be an invitation to join. I never took up the offer. Nor was I ever informed of any rituals as detailed by the young Canadian but I knew enough about Masonry not to be surprised by anything that they are claimed to do.

I left the military in protest over an Operation I was involved in that I took to be in the interests of the corporate world and was disgusted by the actions of some of my comrades. After informing my immediate superior of my intentions and reasons, I was threatened with having my throat cut and informed I would not survive the time it took to get out. Without going into detail, I did survive the next few months which were the most difficult and uncomfortable of my life. Thankfully, many of their threats are hollow and empty.

On my release I soon discovered I would never be allowed to succeed in the UK and was put under a large amount of torment by the British government. In the end, I decided to leave the UK and never return. To this day I have kept to that and have had a relatively happy life.

One of my port of calls was Australia and I got attached to a group of ex pats, one of whom was also fleeing the UK because of harassment. I must stress that we had never discussed each others problems and ideas until he came to my unit one night in a very shaken state. He was a hard man even by my standards so to see him shaking and crying like a young child was a shock.

He told me that the lady he had been dating for a few months was having some emotional problems and they had had a sit down, heart to heart chat to see if they could resolve them.

She told him that she was brought up in [foster] care and that she had been used in sex movies as a child, that some children had been murdered during the making of these movies and that the adults involved were influential people from government, the business community, law enforcement of Queensland and although she hadn't said they were Masons, she had mentioned going to Lodges.

My reaction to this information was denial, I just couldn't handle the responsibility of knowing it and I feel like a coward for my next actions. I told him to leave and I left the country within the next few weeks.

I had put it to the back of my mind until I started reading David Icke's attempts to expose the abuse of children by Masons and some of your articles and I wish to share with you what I know and have heard. I hope you can use this information to help bring down the evil, Satanic bastards that have controlled us for a long time.

Comments for "Freemasonry: "How the World Really Works" "

Dear Henry .... I would like to thank you for providing people like me with such an extraordinary website ... I search the net daily looking for some semblence of truth ... who to believe? Your site is my favorite, and
I have learned so much reading its contents daily ... your other readers who comment are brilliant ... what a great readership you have ... it is nice to see that there are educated, articulate people who are as
concerned as I am