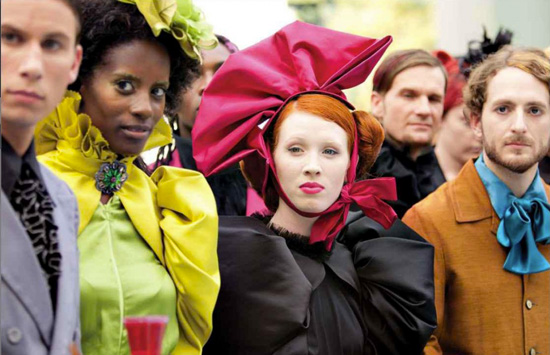 (left, the Satanic elite look like a friendly bunch)


The movie makes the New World Order look innocuous so we don't have to worry about it.


A father who took his daughters to see "The Hunger Games" told me, "How can the movie be so evil, if the heroine fights the dictatorship?"

However, the globalists seldom make a mistake and, after seeing the movie, I believe there is a fact that explains the elite's big bet on "The Hunger Games."

The movie makes the new world order look weak and ridiculous, so we don't have to worry about it.

Because of the internet, many people, and especially the young, know much more about the new world order than one generation ago. The Illuminati have to act, and nothing is more efficient than making a real, dangerous enemy look stupid.

In the first scene of the movie, we see an elite representative come to get the kids. She is dressed like a clown and talks like an idiot. How can fear or drama develop when you have such a Bozo in charge?

Later, we see that the whole elite population dressed like Willie Wonka, from the Chocolate Factory movie.

There is a guy with blue hair and another one with a beard painted with ink. To make the resemblance even better, the control room, with the employees all dressed in white, reminds me of the Oompa Loompas in the TV room in Wonka's factory. The whole thing is designed to look ridiculous, not scary or oppressive.

The movie delivers the message that girls (the main target) should be aggressive and macho.

If they behave this way, they can beat any challenges.

No mention that girls who behave this way will have serious problems in marriage and the raising of their own children, roles where femininity is crucial.

No mention that the movie goers are sadistically enjoying the games in the same way the awful elite in the movie is.

The violence in the movie is gratuitous. Imagine in real world kids running for weapons and 6 to 8 kids being stabbed to death in five minutes.

This would be a shock, a trauma for life. Kids would probably start crying in despair and anguish. However, in the movie, they are just cool about it and keep going, like mature soldiers who have seen death a thousand times.

Video games are blamed for desensitizing children regarding violence, but the whole atmosphere of the movie is much more dangerous than the one in, say, "Call of Duty" (where we find no children dying).

Kids learn that it is OK to be competitive and ruthless with each other. The "winner-takes-all" message, already a trait of our real society, is imprinted even deeper in their minds.

Unfortunately, it is practically impossible not to cheer and expect that the heroine will shoot an arrow in the chest of one of the other kids.

The only good message is the protection of a very politically correct black girl (who dies anyway and is not black in the book) by the heroine and the unwillingness to kill the boy for whom she is attracted to. Kill everybody, except your lover.

There is not much to review. The film is boring, the characters have the personality depth of an amoeba and the pace is as slow. The heroine is able to maintain a single facial (lack of) expression for two hours. Almost nothing happens in the first hour. The girl volunteers to fight in the games in the place of her sister. That's it.

The 24 kids from the oppressed districts head towards the Capitol in order to play in a survival game to death that is broadcast on television for the elites. No drama; no deep discussion about the fairness of the whole thing. Nothing.

Then we have half an hour of a bad parody of the "Predator" movie, with kids killing each other with knives, arrows, spears and blows with a brick to the head.

The heroine climbs trees and runs over streams. Instead of Schwarzenegger and Jesse Ventura, we have pre-teen kids bleeding to death. In order to attract teenager girls, the last half hour has some romance, and obviously, the heroine wins against all odds. That's it.

So, what makes Hunger Games different from a cheap, badly written and performed B movie ? It has Illuminati sponsorship. The movie was produced to make the New World Order look weak and ridiculous, so we don't have to worry about it.

Comments for ""The Hunger Games" Sugarcoats Tyranny for Kids "

You missed one or two hidden messages inyour movie analysis:

The most insidious hidden message in the movie is :don't bother to rebel against the PTB cuz you'll lose and you'll pay a harsh tribute, forever, in being obliged to sacrifice innocent lives in mortal confrontations in between all rebelling factions that challanged the PTB. The losing rebels will be forces to fight one each other.

Last, the Hunger games is managed by a black hair guy bearing a beard trimmed in a peticuliar fashion corresponding to the flashy fashion of the elite group, yes, but also suggesting a demoniac/satanic/luciferian roots of the said "games" (reminiscence of the gladiator games).

A young man posted a video on YouTube and discussed the post human. In his video (The Age of Transitions) he talks about the use of movies and television to push the Darwinian "new" eugenics, of which programming features society against itself: children against children, adults against adults--survival of the fittest. Some of the examples he used were the tv show The Biggest Loser, and other reality shows, including Survivor (I don't watch those shows but I've seen commercials for them).

The current movie, The Hunger Games, is part of the same programming via a method he mentioned called Memetics. I did some research about Memetics, last night, and I realized that the movie, the Hunger Games, and even the tv show, Dr. OZ, are basically Memes--ideavirus' that are smaller parts of a larger machine that is being used to socially engineer the minds and hearts of humans in a sinister direction. Memetics is referred to as an ideavirus, and it us used to "infect" the minds of the masses via one essential host: the Meme. It is also no coincidence that the host of the Dr. OZ show is named Mehmet (Memetics).

We should pay very close attention to what's going on, because there won't be that many of us left who are not part of the Matrix, before all is said and done.

The Age of Transitions:
http://www.youtube.com/watch?v=0qyp6j6wH2M&feature=related

"The Hunger Games" describes the return of gladiator-style violence intended to occupy the attention of mid- to lower-level citizens in the future society that the Illuminati have planned.

The Illuminati have drawn up a plan for a strictly hierarchical society, far stricter than what is presented in this film, by the way. The lesser levels of society will need entertainment.

The past few years have borne the phenomenon of a sudden garden of gladiator films. Of course we had the in-your-face film "Gladiator", with Russell Crowe, in 2001. That was the setoff. It's been followed by the "Undisputed" series, I (2002), II (2006), and III (2010), "Blood and Bone" with Michael Jai White, "Fighting" with Channing Tatum, "Real Steel" with Hugh Jackman, "Arena" with Samuel Jackson, and so forth.

The gladiator is coming back.

There is a third indicator in "The Hunger Games". The selected actors are of note. Rather than laying out the connections, take a look for yourselves. Filmographies can be looked over at www.imdb.com.

The big names in the film are Donald Sutherland, Stanley Tucci, and Wes Bentley. Sutherland is the ruler; Tucci is the media; Bentley is the fall guy.

I find it both apt and humorous that internationally renowned film critic Roger Ebert described Bentley's facial hair as "so bizarrely designed that Satan would be envious". The design is Luciferian, actually.

The mainstream film industry has moved into overtime, with presentations of media that are Illuminati-conceived, Illuminati-sponsored, and portentous.

THERE IS NO MAJOR BLOCKBUSTER BEING PRODUCED, OR PRESENTED, AT THIS TIME, THAT IS NOT STRICTLY ILLUMINATI-SPONSORED AND APPROVED. Vacation is over.

I recommend the following:

What is never discussed is the bullying that occurs in the homosexual community. Young men who are unsure of their sexuality are sometimes stalked like prey. I have an old, sour memory of an example of this.

I was a manager of telephone operators in the 1970's. Since I was able to write documentation that would withstand scrutiny, and was considered a maverick, I had all the hard cases that others could not handle dumped upon myself.

One was a pretty young man. The girls who worked alongside him vied for his attention. I finally asked one of my employees why were they so attracted to him? She said they all knew he was "part gay", and considered it a game to see who could seduce him.

My travails regarding him began when he disappeared after a three-day weekend, only to surface after 10 days. He had apparently used LSD in the desert with another male, and now accepted himself as homosexual. He refused to return to work, so I started the administrative steps to terminate his employment. That is when I realized the power that homosexuals can wield.

A gentleman from our company's legal department, and my district manager told me that this young man had decided to have a sex change operation, and that I would be directed on how to proceed.

Through the ongoing months, the young man told me that the man in the desert was his lover, a high level executive in my company who had spotted the young man in an office picture (people were often singled out for looks to grace the pictures in the company's newspapers).

He apparently had reservations about the operation, and told me he was feeling much pressure to undergo it. He finally left work in a psychiatric disability case. Normally I would have been the one to handle it, but the case was moved to company headquarters. I lost track of him at that point, and do not know the outcome of this sad tale.