Is Libya Part of a Globalist Strategy? 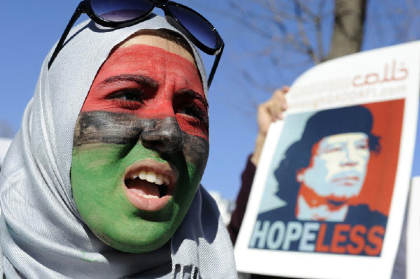 In his 1997 book, "The Grand Chessboard," Zbigniew Brzezinski advocated a "global-zone of percolating violence," that included Central Asia, Turkey,  southern Russia, and the western borders of China. It also included the entire Middle East, the Persian Gulf (Iran), Afghanistan and Pakistan.

As usual, the people are cannon fodder for the super rich.


by Christian Soderberg
(for henrymakow.com)


The Pakistan Observer recently reported that hundreds of US, British and French special forces have arrived to East Libya as "advisers" for the anti-Gaddaffi rebels, on the night of 23/2 near the eastern Libyan cities of Benghazi and Tobruk.

The Special Forces might be working with militias tied to National Front for the Salvation of Libya (NFSL). The CIA apparently supported this opposition group in the 1984 failed coup against Gaddaffi.

NFSL is led by Ibrahim Abdulaziz Sahad, who's at the moment living in exile in the US.

NFSL is also a group-member in the 'National Conference for the Libyan Opposition', one of the groups who organized the anti-Gaddaffi/government protest in Libya.

Another coalition group of Libyan rebels, The National Libyan Council, is calling for UN-backed air strikes on "foreign mercenaries", according to Reuters.  Although just three days earlier the same spokesperson, Hafiz Ghoga, a human rights lawyer, told Reuters, "We are completely against foreign intervention. The rest of Libya will be liberated by the people."

It looks like it looks that the Globalists (international bankers and industrialists) controlling Washington, NATO and EU, are trying to steer this Libyan revolution in their direction, and the purpose is to get bigger share of Libyan oil and gas.

But the Western intervention will serve as a provocation to Islamic-radicals to prolong the Globalists' War on Terror and to create more distractions from the corruption back home.

These Middle Eastern pro-democracy protests are funded by Globalist-billionaires like George Soros, a Rothschild lieutenant.

Another important figure is Zbigniew Brzezinski, a member of Trilateral Commission , Bilderberg Group and Council on Foreign Relations, and a senior adviser to the 'International Crisis Group' a group with close connections to the World Bank and George Soros, a group that Mohamed ElBaradei left in Jan 2011, right before returning to Egypt to become the "face of the democratic revolution".

In his 1997 book 'The Grand Chessboard: American Primacy and Its Geostrategic Imperatives',  Brzezinski emphasized the importance of American dominance of the oil/energy rich Central Asia or "Eurasian Balkans."

"Moreover, as America becomes an increasingly multi-cultural society, it may find it more difficult to fashion a consensus on foreign policy issues, except in the circumstance of a truly massive and widely perceived direct external threat." (211)

This book was published four years before  9/11 got the American people and the world behind the Illuminati invasion of the Eurasian Balkans, Afghanistan and Iraq.

Rather than NATO intervention, we may see prolonged turmoil in which the western governments will arm the local armies to clear the way for them. This can go on for years as we have seen in Iraq.

Iraq has been fairly close to a state of civil war since the "coalition-invasion" in 2003, while Brit and US covert operations have been caught staging some of the violence blamed on Sunni and Shia militias.

Radical Islamic groups are taking part in the Libyan uprising. "Islamic Emirate of Barqa" is said have seized arms and 70 military vehicles with the help of Libyan army officer(s).

Francois Fillon, the Prime Minister of France, declared a war against Al Qaida in July 2010 after the death of French aid worker, Michel Germaneau who was kidnapped in Niger in April 2010.

Of course, "Al Keda" is a creation on the CIA.   You can't have a war without an enemy. These days people will not rise up "for their rights" unless they are properly sponsored.

The Globalists also used 'psychological warfare' to radicalize Afghans including school books, which were still re-printed during the Taliban era in the 1990's.

"In the twilight of the Cold War, the United States spent millions of dollars to supply Afghan schoolchildren with textbooks filled with violent images and militant Islamic teachings, part of covert attempts to spur resistance to the Soviet occupation" writes the Washington Post

This recent article by David Rothscum details Western intelligence involvement in oil rich Libya. He links to a Guardian article about  claims by a British MI5 officer, David Shayler, that MI6 funded a Libyan Islamist group with ties to Al Qaida in their failed assassination attempt on Gaddaffi in 1996.

Turmoil and insurgency in resource-rich countries helps the Illuminati to get the oil, gas, and other business ventures for a cheaper price, while driving out weaker competition.

After some "order out of chaos" has been achieved, the area of conflict needs to find to raise revenue to build the country up again. The Illuminati bankers are there to offer their "helping hand".

Just as Iraq has begun to stabilize, Libya is here to fill the vacuum. The Illuminati thrive on war. Pakistan is next.

"..British diplomats and spies have been engaged in intensive efforts to speak to opposition forces, which are led by Mustafa Abdel Jalil, head of the rebel National Libyan Council.
Now ministers have approved a presence on the ground to gather information and boost the chances of the rebels.
The liaison teams will be primarily composed of envoys but will include some intelligence officers.
They will link up with Special Forces already in Libya to provide protection and give informal military advice to the Libyan opposition."

Comments for "Is Libya Part of a Globalist Strategy?"

Yeah ..he seems to have zero credibility ...and this is why the UK Gov dragged him into court, gave him six months for disclosing documents he got a hold of while working for MI5, and also this is why they don't allow The Observers to print details of these claims he made during the hearings.

For the same reason the US gov donâ€™t wanna test the World Trade Center remains for explosive materials and especially for nano-thermites â€¦because people are crazy ..right?

Whatever they guy is in his personal life does not mean the MI6 and CIA are not controlling â€œterrorist pseudo-gangsâ€, and this has been going on ever since the creation of CIA (Operation Gladio) ..and sad to say this is also happening in Northern Ireland:

Here are claims made by other crazies like former FBI translator Sibel Edmonds.

Bombshell: Bin Laden worked for US until 9/11

For Bloggers, readers and commentators who may not know, there is a very large question mark indeed over David Shayler's sanity. I have attended a weekend conference where he was a speaker and the topic of his talk...... he claimed that he was Jesus Christ Incarnated for the Second Coming no less. This was some years back and from what I hear on the grapevine, his apparent grasp on reality did not improve in the intervening period.

This reference following and the many more that can be found for this year alone by googling David Shayler, + Delores Keane + 2011 confirm the foregoing need for caution in crediting anything from David.

The most charitable assumption that can be made is that there is a personal tragedy and mental breakdown happening in the full gaze of public sphere. However as we Irish Republicans have learned to our cost, few safe assumptions can be made regarding MI5, MI6 or the other Brit Intel 'hall of mirrors' stuff, David could also be in deep, very deep cover. Readers, now that they have been alerted, can make up their own minds on the matter.