Now they're putting loyalty and trust in a bottle.


BY RICHARD EVANS
(for henrymakow,com)


I just learned this--it gives creepy insight into how they think they can homosexualize the military.  They plan to do nothing less than turn straight young men into butch homos.  Now that they've suppressed natural bonding between young men and women,  phase two is a CHEAT - using a drug to force involuntary bonding in controlled same-sex situations - like army and navy duty.

This drug is reminiscent of the love drug "Soma" in Aldous Huxley's novel 1932 Brave New World. "By this time the soma had begun to work. Eyes shone, cheeks were flushed, the inner light of universal benevolence broke out on every face in happy, friendly smiles. Even Bernard felt himself a little melted."

The Dutch tested it on soldiers, according to this article in The Telegraph.

What's been announced is a Dutch study in which combat units were given a nasal spray containing the hormone oxytocin.   They say this hormone causes unmerited trust, loyalty and urge to defend and sacrifice oneself for the group (the platoon.)

In short, it causes a temporary, hormonally induced illusion of male bonding.   They are going to be loading troops up with this Satanic 'luv potion' while distributing openly gay plants in the ranks.  Notice the experiments were done by the Dutch - whom we know have been the 'beta test' army for this experimentation.

They're obviously ready to deploy this truly evil plan.

"Giving soldiers oxytocin might make them more cooperative towards their comrades, even willing to self-sacrifice," De Dreu said. "But it should [also] make them more likely to launch a preemptive strike against the competing army, with conflict-escalation being the most likely consequence."

A brain hormone that fosters fuzzy feelings between mothers and children may also goad soldiers to launch preemptive strikes in defense of their comrades, according to new research. While boosting social bonding and cooperation, it also triggers defensive aggression against outsiders who might threaten an individual's social group, psychologists say.


Not just for soldiers - It's going to be mandatory for autistic children in schools.  (Autism has become an unexplained epidemic in children born since the 80's.)

Make no mistake, the hormones will be put in everybody's bloodstream one way or another.  It's been in the news before this year every month is a different context - all promoted as wonderful.

A month or two ago I heard another story on NPR about another application -- an American psychiatric study saying the hormone causes 'trust' -- they suggested that the recent trend since 2008 more Americans distrust the government, distrust banks, distrust salespeople and commercials a little.  "That can be bad in a time of economic recovery."

The nasal spray has been available for years for nursing mothers.

GUESS WHAT - THE HORMONE IS AVAILABLE WITHOUT PRESCRIPTION AND MARKETED ON WEBSITES
http://oxytocinnasalsprays.com/

GUESS WHAT - THE HORMONE IS AVAILABLE WITHOUT PRESCRIPTION AND MARKETED ON WEBSITES
http://oxytocinnasalsprays.com/

In 1940's-70's America, there was a saying about how to get girls to have sex on a date, "candy is dandy but liquor is quicker".

Liquid Trust is currently running a promotion on their 'Enhanced Oxytocin Spray' product.

Combining powerful male pheromones with the scientifically validated effects of oxytocin, this must be the most powerful 'love spray' on the market.

Just what any man needs with Valentines Day coming up!

"If there's one thing that every bad stand-up routine ever has taught us, it's that men and women are different. Men like sports and violence while women like shoes and watching Sarah Jessica Parker buy shoes. Thanks to that damn reproduction thing though, we incredibly different genders have to occasionally hang out with each other. But isn't there some way to make male Martians more like female Venusians? 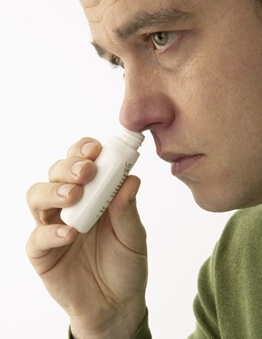 Don't fret, because the BBC is reporting that there is! A team of German and British researchers have invented a nasal spray that makes men more "empathetic." Let the nose-based emasculation begin!"

This article reminds me of something I heard many years ago, about producing the "perfect" soldier... Genetic alteration, pharmaceutical induced changes, surgical implants, etc. All to "enhance", or to "improve" the basic foot soldier.. Now this interesting revelation... It rings true to me, those who are in control, wish for us whom they deem worthy of "keeping" become loyal "automatons", perhaps more "serflike" willing to do the bidding of our "masters" at their whim. . Even at the cost of our own lives. . Yet not us, a drug influence loyalty. . sickening to say the least. Not to mention the possible "side effects" of addiction to this chemical. . when these soldiers are integrated back into "normal" society. (The psychological damage done to the current soldiers we have has yet to be assessed properly)

Nothing surprises me anymore, from these cretins, the chicanery, the vileness, their despicable behavior seems to have no bounds, yet I feel in the end it will all work against them. . Perhaps it's merely wistful and wishful thinking on my behalf, I believe ultimately good will triumph over evil. . Even though "they" try to blur which is which.

There's nothing "unexplainable" about autism. It can be easily traced in almost every instance to the damned inoculations forced on innocent children. The price of paying off families for ruined children got so high in the U.S. (way into the billions) that the government changed its tune and now says shots have nothing to do with it.

Activated charcoal from non-coal sources is the universal detoxifier in high enough doses, as is Vitamin C (sodium ascorbate is the type used in medical research). Tell a friend today!
Christine