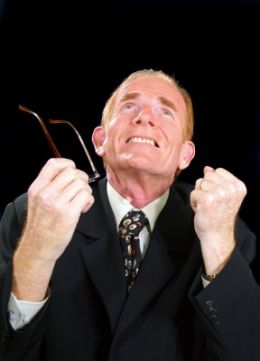 "My Marriage is a Living Hell," - Tender-hearted man


"I, like many men, am starving for affection, kindness, respect and an ounce of tenderness from their spouse or any woman for that matter."


I have been married for 35 years, most of which have been a living hell.  I've stayed married for the sake of my children and now that they are in their early twenties I  still stay because I've been here so long.

At 58, with a shitty pathetic economy, it's hard to imagine being able to sustain myself alone.  I've left my wife over the years, three times in all.  I always came back.  My last exit was in 2008; I just couldn't take the brash hatred, angry aggression and abusive lashing out verbally any longer.

I'm ashamed to say a few weeks later I had a panic attack and I thought I was losing my mind.  I went back again but this time I was forced to go to  "wife batterer's" meetings for six months.  In their eyes, any affront to a woman is abuse, no matter how much she screams, throws things, gets in your face, drives you to the point of insanity.....it's still your fault.  I found out later the instructor had an abusive father and could not believe a woman could be abusive.  My thought was, "What a freaking idiot!"

My wife is a full blooded Irish, with a temper from hell.  You're so right as to how a woman who forces her way to control the home, her children and her husband castrates her husband.  I feel weak, depressed and just wait to die.  We haven't had sex in four years even though she says she wants to but the thought of it makes me want to puke.  My wife is a wonderful woman but a horrible demon for a wife.

Women who have borderline personality disorders or bipolar disorder should never be allowed to marry anyone.  I think that's what she has, that and being the daughter of one of the biggest bitches I ever met....thank God she's dead now.  I watched her father get nagged to death.

My wife is a control freak who constantly complains about everything I do or don't do.  She never shows me any respect and never has anything good to say about me.  Conversely, she is convinced I'm the control freak who's tried to control her, her whole married life, the source of her unhappiness and so on.  Some of our friends have seen a glimpse of what she's like but she hides it when anyone is around.  Personally, I don't know any man who is in control of his home.  Just as soon as you want to do something they don't like, you'll find out how much control you don't have.  I also believe women are the most evil creatures God ever created.

I'm a sensitive man, tender-hearted and kind.  This is not to say or imply I'm a weak kneed wimp, far from it.  I spent 12 yrs in the Navy and I have no problem getting in somebody's face if its needed.  But I, like many men, am starving for affection, kindness, respect and an ounce of tenderness from their spouse or any woman for that matter.  This is one reason, so many men cheat on their wives...no affection at home.  On the other hand, it's also one of the reasons why some men turn out to be crazy killers....don't worry, I have a conscience and couldn't ever do it.  I'd be quicker to do it myself just to stop the pain.  The Illuminati is doing a damn good job of destroying men.

One bit of advice I give people who are considering being married is this, "Look at how your girlfriend or boyfriend's parents treat each other.  Watch how the mother treats her husband, because if you're a man....that's how you're going to be treated.  It's also how she is going to expect to be treated, good or bad."  I wish I knew then what I know now.

Dear Mr T, I believe I may be the female version of your predicament.  I was married for 25 years to a physically, emotionally and financially abusive 'man' with whom I had two children, one son who died when he was six and a daughter from whom I am now estranged because of the abusive tactics of her father.  Then I had two very short marriages after that which left me financially almost ruined and spiritually almost destroyed.

I stayed in the first marriage "because of the children" too, then circumstances changed in my favor and I was able to get a divorce and financially support myself.  My parents had no idea what had been going on and I was too proud to go to them for help.

For the last few years I have been reflecting on what has gone wrong for me and I have come to the conclusion that I have been a magnet for psychopathic types.  I'm a nurturer, an enabler and too quick to take the blame.  My mother was the same and although you said to look at your partner's parenting, which I agree does have an impact, you also have to look at your own parents.  Very often we choose mates unconsciously because we are trying to work out relationship problems with one or other parent - my fathers aloofness and cruelty must have had an effect on me to choose unavailable and abusive men!!!

My first husbands mother was a very cold and controlling woman who drove her husband to suicide and he would repeatedly say that he wished my mum had been his mother.  He threatened to kill our new baby daughter so I believe I have been in contact with a psychopath who will even threaten murder in order to control me.  He would fly into rages and punch me repeatedly, strangle me and I still have flashbacks.  Incidentally, like most control freaks, he has tried to enter my life again several times using my daughter as an excuse and I have finally rebuffed him with the threat of a civil injunction.

I have just finished reading a book by Thomas Sheridan called "Puzzling People: The Labyrinth of the Psychopath" and am now reading "Dark Souls" by Sarah Strudwick - both books make very good points and avoid blaming the victim.  My primer on psychopaths was Dr Robert Hares book "Without Conscience".    From your description your wife may be narcissistic, the malignant kind; she appears to be projecting her known faults onto you which is a common feature.  Just like a philanderer will accuse his/her partner of cheating!!!

You said " I also believe women are the most evil creatures God ever created."  I have said because of my own experience that men are the most selfish and psychopathic creatures ever invented and it makes my flesh crawl to even watch films where men are trying to seduce women!!!   Yuk and triple yuk!!!  I ain't going there no more.

However, there is always another side and I try to remember that - for instance I have a male cousin married to a vicious shrew so I know it works both ways. She's been vicious to him in front of me and tried doing the same to me, he is the most helpful and sweetest man I know.

If you can read some of the books I mentioned they may help you to gain more perspective or there are websites and forums for victims of abuse, lovefraud is a good one.  In any case I wish you luck and hope you find contentment

Article is so true. I gave up my life for my ex and her two daughters yet they treated me just like the guy in your article got treated. I am out now and on my own, struggling financially but have peace of mind. The peace of mind is priceless. American women are "messed up" for a better word, do not know a good man when they see one and have not got a clue as to how to interact with one. I will probably stay single the rest of my life. I think I'll get a dog or a cat for home companionship. Pets are at least grateful when you are nice to them.

Your wife is not Borderline personality disorder,  she's well and truly over the line.

There is an epidemic of NPD (Narcissistic Personality Disorder) in society at the moment.

Having just gone through 30 years of this myself, I recommend this website for some online support:

Good videos and discussion forums there.  Also A book by Sam Vaknin entitled "Malignant Self Love - Nacissism revisited". He also has many youtube videos immediately viewable on the topic.

He's the most perceptive I've found because he actually is an intelligent introspective Personality Disordered person himself.

Mr. T - While you may not be a " weak-kneed wimp " on the surface your tale illustrated the fatal weakness that all males have - making a female into your god.  I suggest that for you as for countless others " the end is in the beginning;" i.e; that if you ever had God as #1 in your life you subsequently transferred that worship to your wife or to a worship of females in general.  The result is that your new god grew contemptuous of you for such worship.  That is the keystone around which your marriage living mausoleum has been built.  All males who worship females as their god ( and they are legend ); i.e. as the source of happiness, joy, contentment, or anything else; will experience the same fate.  " "I, like many men, am starving for affection, kindness, respect and an ounce of tenderness from their spouse or any woman for that matter."
When you find The Creator He will give you what no female ever can.  At that time if a female gives you the responses/reactions which you mention then you will be ready to properly them and will not be instead be ruined by them.  And if she doesn't then - so what?  You shouldn't and don't need them to truly live.

There are two abusive people in every abusive relationship - the abuser and the person abusing themselves by staying in the relationship.  While we all fall pray to sociopaths, narcissists and psychopaths at points in our lives and there is simply no excuse for abusing another human being, there is also no excuse for a healthy adult to allow another human being to continually abuse them.  While I understand the noble idea of "self sacrifice" of "staying together for the children" and that is a choice many men and women have made throughout history.  One must accept that they must make the choice begin the usually painful process of taking control of their life and taking back the personal power that was taking from them.

For individuals who are in or have been in abusive or unbalanced relationships I suggest you start with "Mind OS" by Paul Dobransky, also known as "Dr. Paul".  It will help you establish discover the holes in your personal boundaries and begin the process of building healthy personal boundaries.

Continue to do the self development work, build your healthy boundaries, build sets of short term and long term goals, build your self esteem, your self worth until you see yourself as a person who has value, as having a future, a positive future.  Then you can move onto having healthy friendships and then when you are ready move to the dating and relationship materials and in time you may find yourself ready to explore that aspect of yourself again.

Infinite love is the only truth, everything else is an illusion.