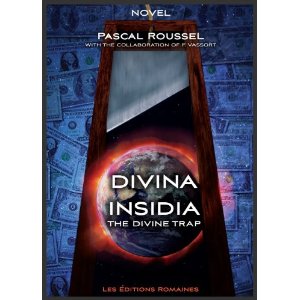 It all becomes very clear. These families have been milking us for centuries. We are quite literally their "cattle" i.e. goyim.

Belgium author Pascal Roussel, 45, is well placed to explain the financial turmoil convulsing the world. By day, he works in the Financial Risk Dept.  of the European Investment Bank in Luxemburg.

Most important, Roussel presents the conspiracy in a simple and plausible way, throwing our collective predicament into frightening relief.


According to Roussel, twelve "oligarchic families" have grown indescribably wealthy by lending "money" to governments at interest. These are the central bankers.  Most but not all are Illuminati Jews. Their wealth is in the trillions. Bill Gates and Warren Buffett are paupers in comparison.

It all becomes very clear. These families have been milking us for centuries. We are quite literally their "cattle" i.e. goyim.

The whole of modern history can be explained by their farm management practices. Wars are started to increase the debt and cull the herd. The goal is to cull the herd to 500 million and chip the remnant. These families and their henchmen own 80% of the world's wealth and do nothing useful yet believe the impoverished majority are parasites. 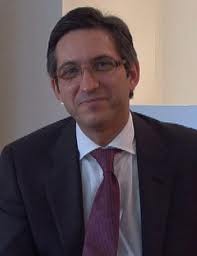 Roussel, (left,) explains how compound interest resulted in astronomical exponential gains year-after-year. All religions have banned lending at interest to prevent what actually has occurred: this immense wealth and power has fallen into the hands of Satanists.

The world's major banks are mere proxies for these twelve families who create the money out of nothing. (The banks get their "money" from them.) Greece is the target now but eventually the whole world will be squeezed like an lemon to get this "money" back. ("We will absorb all the wealth of the world," is how Cecil Rhodes described it to his patron Nathan Rothschild.)

They threaten depositors will lose their savings if banks fail. But, it is really these twelve families of generational Satanists who want their pound of flesh.

If our governments weren't run by their lackeys, they would protect the deposits and let the "oligarchic families" twist in the wind. Roussel doesn't name the families but obviously one is the Rothschilds.

Roussel explains that fractional reserve banking is a ponzi scheme. They lend $90 for every $100 on deposit. Those $90 are deposited somewhere else and $81 more dollars are lent. So it continues ad infinitum.

Obviously, the way to fight this beast is to withdraw your cash from the bank.

Roussel's narrative revolves around a Rothschild who has a spiritual revelation and wants to issue a warning. He selects an attractive young Swiss journalist,  Ann Standford, to write a book and deposits a fortune into her bank account.

He then takes her on a Cook's Tour of Illuminati landmarks -- the Georgia Guidestones, a Bilderberg meeting, Bohemian Grove etc. -- explaining some aspect of the conspiracy in each place.

He describes its origins in paganism and the Kabbalah, which led to the Illuminist philosophy. But ultimately, it boils down to debt and interest.

"You want to defeat us?" Roussel's Rothschild says."Abolish loans with interest and don't create any more money. Economic cycles will disappear. Wealth will no longer be concentrated in the hands of a few "mega creditors" like me and money will gain value in time.  What you bequeath to your children will have more value than when you first got it."

Meanwhile another Illuminati "superior" has put assassins on their trail. Roussel's storytelling is workman-like and his wholesome European Christian sensibility is uplifting.

The ending is quite unexpected and inspired. The book is worth reading  for it alone. Roussel leaves us with a credible vision of defiance and hope. All we need do is affirm the Truth and resist evil. The whole rotten structure will collapse.

Once I reached Anne's first meeting with the 'Unknown Superior' I couldn't put the book down. I'm finishing this morning.
Pascal even got the key element (page 221-226). He describes what he calls the 5th level of consciousness which is in fact repentance and unexpected sanctifying grace as only one can from experience. This is an extremely important message.
All the information anyone needs to know for understanding this age is in the book, more than most readers might appreciate with one reading. For them it's full of seeds they'll understand with experience.

In sum I think it's an important work because there's been a lack of an adequate serious presentation of this material in fiction for quite a while. Pascal is right that the majority of people these days prefer to read novels in their spare time than non-fiction. The demographic that must be reached are young people working in banks and concerns which make the Illuminati system 'go' and are under the spell of indifference because they give them a nice, insulated comfort zone in return for their unquestioning service in daily operations.

I am impressed with the completeness of the contents. The information is all there, and close enough to being right.
He's got that. I humbly suggest he should write a final draft focusing on the art of improving the character identification for readers. The character's are still a bit 2 dimensional. like coat hangers for the narrative. They have plenty of motivation and purpose, and they're credible. It's just that final glaze of novelist's art needed to bring them fully alive for busy readers. I think of the young legal secretary, or loan officer in a backwater commercial bank, computer programmer, customer reps, etc, in their early 20's reading this. They're not yet experienced enough in the world to fully understand the truth of what they're reading, which is the point of creating fiction protagonists with whom they are compelled by the author's skill to identify. Then the information will go deeper into memory.

Novels are for people who aren't ready to take it 'straight up'. It's a way to get the message in the mind like seed, and a map. They may no believe it fully now, but over time as they see things happen in their own experience, the experience of the author conveyed in his book will guide them to their own epiphanies.

Thiis is a good flow chart with key and details of the bank cabal associated with the "Satanic Six" BB, IMF, BIS, IBRD, TRI, GYOTHEN
http://www.mypromisefulfilled.net/docs/bankers.pdf

The sinister architecture of the Black Tower of the Bank of International Settlements [BIS] would give Hitler a "woodie".

"The BIS is the most obscure arm of the Bretton-Woods International Financial architecture but its role is central. John Maynard Keynes wanted it closed down as it was used to launder money for the Nazis in World War II. Run by an inner elite representing the world's major central banks it controls most of the transferable money in the world. It uses that money to draw national governments into debt for the IMF."
http://www.bilderberg.org/bis.htm#Quigley

Carrol Quigley - "the bankers' plan" From Tragedy and Hope.

"The Power of financial capitalism had [a] far reaching plan, nothing less than to create a world system of financial control in private hands able to dominate the political system of each country and the economy of the world as a whole.

This system was to be controlled in a feudalistic fashion by the central banks of the world acting in concert, by secret agreements arrived at in frequent meetings and conferences.

The apex of the system was to be the Bank for International Settlements in Basel, Switzerland, a private bank owned and controlled by the world's central banks, which were themselves private corporations.

Each central bank sought to dominate its government by its ability to control treasury loans, to manipulate foreign exchanges, to influence the level of economic activity in the country, and to influence co-operative politicians by subsequent rewards in the business world."

Great article on Roussel's novel. You have a way of distilling into a bite-sized, palatable morsel something which is abstract beyond most folk's understanding: the economy.

Speaking of the economy; just the other week, I thought I must have just dozed off and woke up in Cloud Cookoo Land, when I watched on TV in Thailand a U.S. mainstream financial news program where right smack in your face they were discussing a shadowy cabal of international bankers, conspiring to take over the world financial system, using their contrived, engineered crises, and about how they left their iconic occult calling- card on their U.S. one dollar Federal Reserve note: The Great Seal, with its all-seeing eye atop the pyramid. Sounds to me like they think our total defeat and conquest are now a foregone conclusion, and that now is the time to audaciously come straight out with it, confident -- after much softening up of our pliable heads -- that we're gonna just roll over and grin and bare the inevitable.

With more exposes like this, the Illuminati will be no longer be a
secret conspiracy, but an open one; something no conspirator can relish.

This whole situation with the Illuminati is a spiritual battle.. Light versus Darkness... Those who work in Darkness fear the Light more than anything. The whole ideal of Spiritual Law is to make Light manifest. Though this may seem difficult at times with the onslaughts of darkness and deception, it is Spiritual Law that Light and Truth will WIN OUT !

Spiritual Law is based on the premise that "truth lives a wretched existence, but it always outlasts a lie." (anon)

The Bible has already prophesied of a class of men who have exorbitant riches and a criminal, deviant lifestyle made possible by egregious fraud. The Apostle James, brother of Christ, terms this class of men who have "heaps and heaps of treasure for the 'Acharithayamim,' or End-Times," simply, as the "Rich Men."

You are welcome to read more about this at:
http://www.spickardssigns.com/october2011brief.htm

James states that the Remedy is terminate this Evil is not bitter retaliation from these Oppressors but, "patience." This kind of patience is based on the attitude of faith and trust in God and is an expectant
restitution of Justice and Reckoning by His Power. Both the farmer, used as an example by James, and the Prophet implied in the Scripture, portray this expectant calm in being assuredly certain of God's Crisis Intervention.

With the kind of exposure that Light Brings and this expectant patience of faith, the Rich Men will "weep and howl for the miseries that shall come upon them."

We have God's Promise on this... something that Satanists can never appropriate, yet always dread. (James 2:19c).