Perfidy: The Story Zionists Had to Suppress 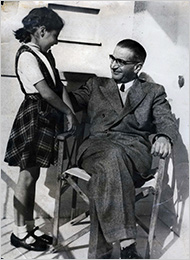 Rudolf Kastner, seen with daughter Szuzsi left --"This small group of quislings knew what was happening to their brethren in Hitler's gas chambers and bought their own lives  with the price of silence. Among them was Dr. Kastner, leader of the council which spoke for all Jews in Hungary..."

The book Perfidy, written by playwright Ben Hecht in 1961, is the single most damning statement to date on the interchangeability of the British-Zionist cabal that ran Israel during its early years and the leadership of the Nazis.

In the book, Hecht presented extended excerpts from the famous 1953 Kastner trial, in which the pro-Nazi activities of Rudolf Kastner, head of a Hungarian branch of the so-called Jewish Agency Rescue Committee during World War II and later a spokesman for the Ministry of Trade and Industry in the new Israeli state, were brought to light in excruciating detail.

In a trial that rocked Israel to its foundations, Kastner, one of the inner circle of the Zionist elite around Israeli Prime Minister David Ben-Gurion during the 1943-53 decade, was revealed to have been the main Zionist agent of the Nazi exterminators of Hungary's Jews. Kastner, an Israeli court was shown, systematically deluded the leadership of Hungary's 800,000 Jews into believing that the Nazis were interested merely in mass relocation of the Jews, not mass murder. In return for this genocidal deception, Kastner was allowed to handpick a small Zionist elite of 388 Jews, mostly from his own family, to flee to Palestine.

Hecht's book detailed Kastner's collaboration with Heinrich Himmler, Adolf Eichmann, and others with such precision that his book was suppressed, censored, and removed from libraries. Hecht's wife, who after his death tried to get the book republished, has been subjected to pressure and threats from the Zionist lobby in the U.S.

Today, copies of Hecht's book are distributed virtually on a blackmarket basis.

Excerpts from Perfidy are printed below. We begin with Adolf Eichmann's testimonial to Kastner's activities, which Hecht quoted from " Eichmann's Confessions" published in the November 28 and December 5, 1960 editions of Life magazine.

In Hungary my basic orders were to ship all the Jews out of Hungary in as short a time as possible. Now, after years of working behind a desk, I had come out into the raw reality of the field.

As Muller put it, they had sent me, the "master" himself, to make sure the Jews did not revolt as they had in the Warsaw Ghetto. I use the word "master" in quotation marks because people used it to describe me. Since they had sent the "master," however, I wanted to act like a master. I resolved to show how well a job could be done when the commander stands 100 percent behind it.

By shipping the Jews off in a lightning operation, I wanted to set an example for future campaigns elsewhere.... In obedience to Himmler's directive, I now concentrated on negotiations with the Jewish political officials in Budapest ... among them Dr. Rudolf Kastner, authorized representative of the Zionist Movement. This Dr. Kastner was a young man about my age, an ice-cold lawyer and a fanatical Zionist. He agreed to help keep the Jews from resisting deportation -- and even keep order in the collection camps -- if I would close my eyes and let a few hundred or a few thousand young Jews emigrate illegally to Palestine. It was a good bargain. For keeping order in the camps, the price ... was not too high for me....

We trusted each other perfectly. When he was with me, Kastner smoked cigarets as though he were in a coffeehouse. While we talked he would smoke one aromatic cigaret after another, taking them from a silver case and lighting them with a silver lighter. With his great polish and reserve he would have made an ideal Gestapo officer himself.

Dr. Kastner's main concern was to make it possible for a select group of Hungarian Jews to emigrate to Israel....

As a matter of fact, there was a very strong similarity between our attitudes in the S.S. and the viewpoint of these immensely idealistic Zionist leaders.... I believe that Kastner would have sacrificed a thousand or a hundred thousand of his blood to achieve his political goal.... "You can have the others," he would say, "but let me have this group here." And because Kastner rendered us a great service by helping to keep the deportation camps peaceful, I would let his group escape. After all, I was not concerned with small groups of a thousand or so Jews.... That was the "gentleman's agreement" I had with Kastner. (pp. 260-261)

A coexterminator of Eichmann's, S.S. Colonel von Wisliczeny, expanded on the nature of this Zionist-Nazi relationship.

Hecht develops these points more fully in the body of the text.

The Final Solution was decided on in Berlin in 1941 -- total extermination of all Jews before the German military defeat put an end to the opportunity.

The S.S. Colonels in Budapest had a knotty problem to solve in carrying out their end of the work speed-up. How to capture and deport eight hundred thousand Jews for killing in Auschwitz with only 130 S.S. as foremen? And only five thousand Hungarian gendarmes....

The only possible way of getting Hungary's Jews to Auschwitz on schedule was to keep them ignorant of their fate. Even more, to do everything possible to spread the delusion among them that the Germans in Horthy's Hungary were human folk with no murder in their eye.... (A quote from Eichmann years later):

"With Hungary we were particularly concerned. The Hungarian Jews had lived through the war relatively untouched by severe restrictions. We wanted Hungary combed with a tremendous thoroughness before the Jews could really wake up to our plan and organize partisan resistance." The S.S. launched their delusion offensive at a first get together with Hungary's leaders of Jewry.... With the Jewish leaders properly drugged, the Germans started the Jew round-up cautiously....

But the Germans smelled trouble ahead. Reports were coming in that Jewish groups were meeting in secret, trying to organize armed resistance. Other Doubting Thomases were escaping across the border to areas that offered haven for Jews. The exodus might grow.....

Enter here, an answer to the German problem -- Rudolf Kastner.... The Kastner personality is definitely a plus in Nazi eyes. It can be utilized. But more important than who Kastner is, is what he is. He is the representative of the Jewish Agency of Palestine, and a member of Ben-Gurion's Mapai Party.... He will continue the "Elite policy" of Weizmann (the policy enunciated by Zionist leader Chaim Weizmann in 1937 that Europe's Jews were "dust ... in a cruel world.... They must meet their fate.... Only a branch will survive. They must accept it." -- ed.) and, after some modest protests, will be satisfied with the rescue of a selected group of six hundred....

With Eichmann's approval, Dr. Kastner alters the original deal somewhat. Instead of picking Jews from any "outlying towns," he picks three hundred and eighty-eight Jews from Kluj (Kastner's home village --  ed.) alone. They are the "best," the most important members of Kluj Jewry -- mainly Zionists. [Possibly they are members of a closely knit cult of Sabbatean-Frankists. hm]

He includes also his own family.... Kastner knows the truth about the Final Solution, about the S.S. plan to deport all the eight hundred thousand Jews of Hungary to Auschwitz for cremation.... If Kastner breathes a word of this truth to a single condemned Jew in Kluj, the entire Final Solution will be wrecked. The twenty thousand Jews of Kluj will knock over their handful of guards and escape to Rumania, three miles away....

"I am a Jew. In spite of that -- indeed because of that -- I accuse certain Jewish leaders of one of the  most ghastly deeds of the war. This small group of quislings knew what was happening to their brethren in Hitler's gas chambers and bought their own lives  with the price of silence. Among them was Dr. Kastner, leader of the council which spoke for all Jews in Hungary.... I was able to give Hungarian Zionist leaders three weeks notice that Eichmann planned to send a million of their Jews to his gas chambers.... Kastner went to Eichmann and told him, I know of your plans; spare some Jews of my choice and I shall keep quiet.'

Eichmann not only agreed but dressed Kastner up in a S.S. uniform and took him to Belsen to trace some of his friends. Nor did the sordid bargaining end there. Kastner paid Eichmann several thousand dollars. With this little fortune, Eichmann was able to buy his way to freedom when Germany collapsed, to set himself up in the Argentine.... (pp. 261-262)

Hecht also presented cogent evidence that the  Jewish Agency (the Israeli-state official governing body for Israel) and the Joint Distribution Committee systematically and willfully withheld information  from the world's press and governments about the mass extermination of Jews by Hitler; that affidavits written by Kastner immediately after the war were solely responsible for the acquittal by the Nuremberg Trials of such genocidal murderers as Kurt Becher; and that Kastner's activities were only a somewhat extreme variant of the hegemonic attitude of the Zionist leadership of David Ben-Gurion, Moshe Sharett, and others, whom Hecht frequently identifies as nothing more than British stooges.

After noting that the judge who was presiding over a libel case that Kastner had brought against a journalist who accused him of collaborating with the Nazis stressed that Kastner's wartime duties were "part and parcel of the general duties of the S.S.," Hecht documented the extreme political discomfort felt by the British-loving Ben-Gurion elite as a result of the Kastner expose and the failure of the libel trial. As the possibility mounted in 1950s Israel that Kastner would be put on trial himself for Nazi collaboration and that the whole Mapai group would be tarred with the same charge, Rudolf Kastner was suddenly assassinated -- by a young man who, Hecht noted, had been in the employ of Israeli intelligence just months before the assassination occurred.

Two additional anecdotes from Ben Hecht's Perfidy. One witness at the libel suit which Kastner brought against his accuser provided documents which proved that during the war the Allied powers refused to bomb the crematoria at Auschwitz even though nearby industrial and related installations were hit by bombing raids.

Tens of thousands of Jews, it could be surmised, would have escaped death if this operation had been carried out. Hecht concludes his book with an account of the Joel Brand case. Brand, a member of a Jewish Rescue Committee in Hungary, had arranged an exchange deal with Adolf Eichmann whereby Eichmann would deactivate plans for extermination of Hungary's Jews in return for several thousand trucks for, Germany. In full collaboration with British intelligence, Hecht points out, the Jewish Agency executive -- including David Ben-Gurion, Moshe Sharett, and Ehud Avriel -- had Brand arrested by the British in Syria when he came to the Middle East to plead his case for the deal. Brand was detained for four and a half months. Needless to say, the deal with Eichmann was sabotaged by this British-Zionist operation. Nearly a million Jews perished as a result.

The whole book is on line.