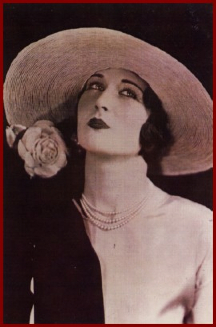 Sasha Spencer provides an insightful analysis of how feminism programmed her to fail.

"I can now lament at leisure my squandered youth and beauty.  I seem to have done it all backwards."

As a girl growing up in the American Midwest in the 1970's, I felt there was no social approval attached to the traditional feminine role.

A naive media sponge, I told my mother: "You need to be more assertive and less co-dependent."  I assured her that everything she had to teach me about womanhood was outdated.

The same applied to my very Victorian grandmother.  "My husband can fix his own damn dinner!" I snapped. " I will have more important things to do!"

No longer could I look to them for direction.  This was uncharted territory but I was sure of one thing:  I was chosen for greatness.

In my youthful ignorance, I imbibed every issue of Ms. Magazine. Liberated from man and oppressive roles, I felt I had the key to happiness.  I would prove myself in a "man's world."

I fell for the Rockefeller-funded B.S.   I was an angry young woman and the problem was men!

In spite of all this, I married at age 26.  My first husband was a brilliant young doctor finishing his residency at the Mayo Clinic.  Honestly, I couldn't have asked for more in a mate. A great provider. Treated me very well. I was set for life!

But this wasn't enough for an angry young feminist.  I had to prove myself and it had to be great.  Deep down, I never felt completely worthy of my great find in a man.  I had to make it harder on myself.

Therefore, I embarked on my "career" in media, acting and modeling.  I was rarely home.  The marriage ended in my early 30's. I was off to make my glamorous fortune!

I was nine-years single, had scores of exciting men to date and a few minor television and film experiences under my belt.  I then landed my dream job.  As Executive Director of an Impressionist Painters Society,  I was off to France.  I began the journey of my life.   I was living and working with the family and heir to a famous French painter.  My dream had finally come true and it did not disappoint.

But all good things come to an end, however, and so did the job and my love affair with all things French.  By this time, I had the nice house, car, beautiful artwork, clothes, boyfriends. I was indeed at my most glamorous.

I had never been the type to dream of a husband and children. But after the dream job ended, I began to long for something lasting.  I wanted a family.

As fate would have it, I agreed to meet my childhood sweetheart in Houston.  We had not seen each other since we were teens and surprisingly, I had business right in the city.

Soon after, my childhood beau and I fell in love a second time and quickly tied the knot.  He was a former football player, the last of the "Marlboro Men."

Less than one year later, on my 40th birthday, I was shocked to find myself pregnant.  Alas, I had already decided to leave my husband.  It wasn't working. He was scary and verbally abusive.

In truth, I had no idea how to be a wife to my two husbands.  But I did know how to be glamorous and exciting!  I thought these husbands were there to serve and support me and my success, whatever that was! I sure didn't know.

I was confused by my feminist indoctrination. I was indoctrinated to think  being a wife and mother was a degrading situation. It had no societal validation.   I wanted glamor and success.

REFLECTIONS ON MY INDOCTRINATION

I had allowed myself to go in a direction that always felt false.  But I was afraid to obey standards and rules deeply rooted in the evil "Patriarchy."

Feminism was no place for a fresh-faced young woman like me, naive and wholesome.  But I was hypnotized and lulled to sleep by the popular culture and the demands of the era.

This false agenda perverted my natural feminine instincts. Instead of feeling valued for being a wife and mother, it fostered instead a quest to prove my worthiness in masculine terms.

My worthiness now meant being compared with a male.  Which one of us had the ultimate right to exist and thrive in this world?  I mean, it's a competition now, right?

when you deny your own nature.

WAKING FROM THE EVIL SPELL

I can now lament at leisure my squandered youth and beauty.  I thought it would last forever and a day.  Or, at least until I was tired of it.  Don't we all?

I seem to have done it all backwards.

Instead of painfully questing for my intrinsic worth as a female, I could have been building a strong family unit, the strength of which could now shield me from the vicissitudes of 21st century life.

We have all suffered from a cruel deception.  Many choose not to look.  However, the heterosexual bond has been the source and sustaining force for humanity.

I now clearly see the utter destruction of the human family.  The battle of the sexes did not serve us.

The Satanist bankers knew what they were doing when they drove a stake between men and women and diminished millions of lives.

U.K born-American bred, Sasha Spencer is the pen name of a Minnesota single mother of a teenage son, trying to decide what to BE when she grows up.

The recent essay, "Feminism Tastes Bitter after Job Ends" is right on target.
And prescient, too.
Will be many stories like that, soon to appear.
Your site is one of my Early Warning Systems.
You see things before almost anyone else.

I applaud the author for coming forward to share her tale with us. Many people are seduced by feminism, both males and females alike. There are too many men that want to let the women do all the work, and too many women who try to shoulder the weight of the world and find they are incapable to perform such a feat. From the way the author told her story there is no mention of a father at all, so I assume she was also raised in a fatherless, husbandless household - the fertile soil in which to plant seeds of feminism. For thousands of years the devil has tried to trick and defeat man. Around the 20th century he realized he was wasting his time and took his trickery back to formula, replicating the original sin. Women are weaker than men and will grab for the apple not knowing what they do. Women the more easily fooled, rarely turn around to the truth the way the author of this article has. Will enough young women have this same revelation, or will they also continue until youth and beauty is gone before they realize the plot?

I did a google search recently for Charm Schools & Finishing Schools, and everywhere I looked at says that many have closed down as marriage and the role of a housewife are no longer desirable for women. The only ones that have remained open are those the elite use to prepare their women for the vocation our women have been taught to abandon. The important thing for everyone to consider is that the richest people are having children and getting married, but telling us to abandon such things. The richest people are also telling us to get flu shots and drink fluorinated water, while they drink water from spring sources or reverse osmosis machines. It is a case where you need to do the opposite of whatever the rich class are telling you to do. The struggle is that your enemy is very crafty and will use their media machine to reshape counter-culture whenever it becomes too dangerous, or to better suit their goals.