The Sabotage of SAA Flight 295, "The Helderberg" 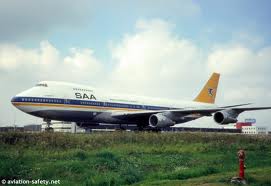 (left. The Helderberg)
"The day the Helderberg was destroyed, November 28, 1987, was the last day the people of South Africa had any form of self determination; it was the beginning of the end."

Dave Meckanic is a Canadian weapons engineer who worked for the Apartheid government of South Africa in the late 1980's.The Helderberg was carrying weapons grade plutonium from North Korea via Taiwan for a Laser weapon that Meckanic was developing.  159 people perished. Meckanic implies that traitors within the SA Gov't. were responsible.
"South Africa is now "usurped by IMF control to the detriment of everyone. The deKlerks, Mandelas, Mbekis, Zumas, all of them are simply meat puppets, not unlike Harper and Obama, that dance to the tune of their master, the IMF (read Rothschilds)."

You may remember the Angolan War. The UN/IMF had surrounded South Africa with hostile Marxist states, some were active in hostilities like Angola and the MLA, others were not.
Because of the Russian/Cuban intervention in Angola and South West Africa (now Namibia), the US came to the assistance of UNITA with weapons and the SADF with recon and logistical support to concurrently engage the MLA, Cubans, et al.
The main control gateway in this conflict from the CIA was John Stockwell. The SADF using CI had Colonel Jordaan who was the Chief of Counterintelligence and my CO.
I was the one who developed (with my team of course) much of the security infrastructure for the country and I was also involved in black budget special weapons programs as either the engineer/designer or project manager.
In 1987 I was approached to build a weapon to take down the Migs in Angola, but to look like pilot error. I did my job and prototypes were made to prove the concept.
But to build the final beast, we needed something that wasn't easily obtained, that being p239. We were under a nuclear audit by the US at the time (part of the deal for CIA support and co-operation) and Palendaba/Velindaba were under constant surveillance and auditor control.
We had no way to acquire the p239 in country, so CI took the initiative to bring the materials in from offshore. The plutonium came from North Korea via Taiwan. At the same time, two other military contracting companies were developing SAMS fuels as a backup to take down the Migs as an extra method, a kind of insurance. The missile fuel was a mixed ammonium perchlorate also from Asia, but in this case, it is only traceable back to the PRC.

TREASON AND SUBVERSION
In order to topple a country, you need three things; time, distraction and traitors from within. The UN/IMF had been funding and inserting politicians in South Africa since the 60's. we remember Harry Oppenheimer's statement that he was "the engine behind the ANC." So, the UN/IMF had all the ingredients to start the ball rolling. Oppenheimer is a Rothschild and they own deBeers and Anglo-American controlling much of the diamond and gold trade as well as many other interests.

We were winning in Angola, with the exception of the Mig problem, so the destruction of the weapons programs would be a serious blow to our efforts and moral in general.
Enter the Helderberg, a Boeing 747 combi aircraft (passengers and cargo). On November the 27th, the ammonium perchlorate (APC/AMP fashioned into an incendiary bomb) was loaded onto the Helderberg on main cargo pallet PR1 while the US (out of the PRC) and South African military attaches monitored progress "on the tarmac."
I don't know which pallet the plutonium was loaded into, but I imagine it was toward the rear of the plane. The Chief of CI, Colonel Jordaan was supposed to be coming back on the Helderberg with his wife but he was warned off boarding the plane.
T.B. Osler, a known CI/MI asset was on the plane, in addition, one other engineer with known connections to the French/Israeli company that produced the mobile VOR beacon in the Samora Machel assassination was also on the plane with his wife. Dawie Uys, the pilot, had his SAAF officer status re-activated and both he and his family were threatened in order to force the take off and complete the flight. The orders came from Pretoria.

This was far too sweet a target for the UN/IMF to miss taking advantage of fully and it was the first false flag in SA of this nature and size. If they could take the plane down with all the people who were active targets, as well as all of the innocent people plus the weapons materials, the catastrophe would complete a number of objectives.

1. cast doubt on and demonize the government
2. demoralize populations
3. stop the advanced weapons programs so they could be sold to the US
4. stop the SAMS accelerator program
5. demoralize and fragment the military
6. force financial adjustments in the country
7. produce extortion "points" for the UN, IMF and US
8. force a change of status in South West Africa ---> Namibia
9. eventually open the country to massive corruption and resource rape due to the above (which has happened)

This one act of mass murder divided not only parliament, but also the nation, it put doubt into every aspect of SA society because people knew military contraband was involved and the government did it, it was in all the papers as rumours of course but very close to part of the truth.
Every military department I dealt with was polarized. Consequently, security clearances were altered to try and prevent insiders from knowing what was really going on in the government.
We (not myself necessarily, military contracting companies I worked for/with) did things that were internationally illegal, like helping the US sell arms to Saddam for the sole purpose of invading Kuwait (why do you think he had to die? he might have told, actually he tried to, the courts shut him up) during the South African arms embargo.
It was not a very nice time but government ministers made good money selling arms and weapons projects, oh, and I quit. I don't mind retiring known terrorists or even unknown ones, but I do have a problem working with people selling weapons to insane megalomaniacs, even if it is a deal brokered by the US government. I forgot to mention, guess who was the judge managing the inquiry into the Helderberg being blown up. If you guessed Cecil Margo, you're right.

In 1989, the UN came back to the SA government with an ultimatum again and the IMF offered up the muscle. We were already a nation divided with ministers in government and officers in the military working for the UN, IMF and/or ANC.

The UN demanded that Mandela be released since he was the new "poster boy" for worldview change. The IMF offered to flood the market with Russian diamonds and destroy the South African economy if South Africa didn't comply.

DeKlerk knew what was going on. He was Oppenheimer's (Rothschilds) bought man, so he did the thing they wanted, bought the diamonds with the country's money and extended the Reserve Bank. But he didn't release Mandela, because the plan was that he needed an excuse to say, "It's the only thing we could do to save the country."

Hollow words since he knew he would eventually get the Nobel Prize with that other traitor Mandela. DeKlerk knew the plan and it would not be much longer until SA went over the edge, so a couple of weeks after the diamond deal, the IMF came back on schedule while Oppenhiemer pretended innocence and "informed" deKlerk of the next part of the plan for SA. They would flood the market with gold and destroy the economy if Mandela wasn't released.

And there we have it, the unknown history of the capitulation of South Africa, sold to the IMF and the UN by traitors like deKlerk through the pressure of worldview manipulation using Mandela, the poster boy for terror as the poster boy for peace, go figure?

South Africa was a nation built of the blood and sweat of settlers and a land mass that was not really occupied by anyone.

This nation is now usurped by IMF control to the detriment of everyone. The deKlerks, Mandelas, Mbekis, Zumas, all of them are simply meat puppets, not unlike Harper and Obama, that dance to the tune of their master, the IMF (read Rothschilds).

My CO, Colonel Jordaan, said to me, "Once is happenstance, twice coincidence but three times is enemy action." We are well beyond three times.

The day the Helderberg was destroyed, November 28, 1987, was the last day the people of South Africa had any form of self determination, it was the beginning of the end. Remember the date, not only for the loss of the country but for the loss of the innocent victims that died that fateful night, their families that still search for closure and those who continue to die on the human stage the IMF and UN constructed from greed of Rothschilds and their spawn.

But cheer up, the worst is yet to come.
--
Related-- Meckanic - Blowing Airliners Out of the Sky
Timeline from Dave's Website

Comments for "The Sabotage of SAA Flight 295, "The Helderberg""

South Africa is but one of 175 some odd nations under global Sabbatean-Frankist control. The effort to bring just one country under global control is nothing short of astounding. You have to admire the Rothschildian deception even if you must do so begrudgingly.

The global takeover is magnificent in its scope as it is in its success. Not a shot has been fired to try and thwart it as it exists, for all intents and purposes, only in the confused minds of raving nuts...of which I am one.

If we cannot admit the magnificence and the skillfulness of our global rulers we are aiding and abetting their grand scheme. Let's be honest with ourselves. I for one am not willing to return to pre-18th century standards. If you are... this should be the last moment online.