The "Sugar Daddies" Behind Feminism 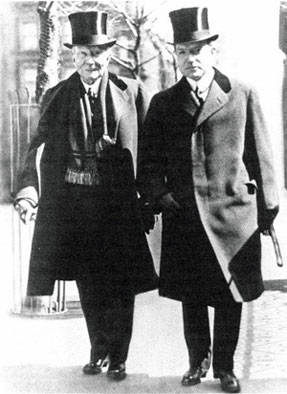 The "Patriarchy" is the Plutocracy and it's Funding Feminism!

Yet, horror to tell, these foundations are dominated by men, not women. Feminism, ostensibly dedicated to "smashing the Patriarchy," is bankrolled by the Patriarchy.

* A 1990 report by Women and Foundations/Corporate Philanthropy found that 23% of foundations surveyed had no women or people of color as trustees. Furthermore, women of color made up only 5% of all foundation trustees.
* 71% of foundation members are male. A similar bias exists among foundation directors. At 14%, women are better represented among chief executive officers of foundations, but they tend to head the smaller foundations. The largest independent foundations are headed by men.

Feminists drawing large salaries in universities and NGO's, all have these unseen sugar daddies.  The rank and file don't know this. They're too busy picking on men who don't pull any more strings in this culture than they do.

I'll show you how to check it out yourself.  First, you'll need the Grants Foundation Index. Using this you can look up foundations and see where their money goes.

Start with an organization's website and where possible, find who funds them, and the list of their board.  Save to a notepad or word.doc.   When you've collected a lot of donors names, most you won't recognize, some you will, but you'll see names crop up over and over again.  They're not all American names either listed on these US foundations.  You'll find many names listed in Who's Who in America consisting of mostly Anglo-Americans, Jews, and a smattering of Spanish, German, Italian, Japanese, and some Russian.  But nationalities don't matter.  What binds them more powerfully is that they're all Plutocrats.

When you have the names of the foundations that fund them upfront, check those foundations websites to find who their donors are. As you go, check each foundation with the Grants Foundation Index.  This will tell you what other organizations they fund.

During the 20th century funding up through the 1970's feminist/population control organizations used to be relatively easy to trace to two 'prime mover' sources.  These could be found either funding directly or through one or two 'conduit' foundations.

The big two were (are)

* Rockefeller Foundation (primarily funding US based feminism/population controller NGO's in the Western hemisphere.)

* Carnegie Foundation (US based international NGO's)

Today it takes more time to trace the money trail back to where the buck stops. The up front organizations who commonly fund NGO's involved in the catch-all 'women's rights' include :

(Curiously, all these foundations have a common social agenda suggesting the rich belong to one club, the Illuminati, and were allowed to prosper because of this membership.)

Prior to US invasion/occupation of Afghanistan and Iraq, the primary target of US population control and 'women's rights' foundations was Latin America, and Mexico. Until the Robles Reform was approved, abortion was illegal in every Mexican state. All that changed, however, in January 2002--thanks, in large part, to funding provided by U.S. pro-abortion foundations.

When the 911 episode gave the US government the excuse it needed to seize Afghanistan and Iraq. destabilizing the region from Iraq to Pakistan, the way was open for the Foundations to deploy the NGO's of 'culture change'.

Islamic culture has a history of resisting Western culture and more importantly, our credit based central banking system.  Men and women didn't want any of that in the Western hemisphere either a hundred years ago.  But foundation funding of the education system, entertainment and media industry, and ultimately, manufactured adversarial division of gender consensus, changed all that.


The money trail leads back to expose once and for all the REAL Patriarchy making life hell for women, men, children, the elderly, and the starving:
The Patriarchy of the International Central Banking Cartel.  Would it feel any better if they were evil old crones instead of old evil men?

The real "Patriarchy" is the PLUTOCRACY. Not fathers, husbands, brothers and co-workers.

Comments for "The "Sugar Daddies" Behind Feminism"

Richard couldn't have found five better words for summing it up. Nice going!

Loved the article. Just wonder if you also are aware of McLuhan's observation that feminism was invented in the 18th century by the mill owners in England in order to bring women out of the relative seclusion of the home and into the work force in order to bring down the wages of the men?

However, it took until modern times to find a propaganda tool powerful enough to convince women that it was stupid to stay home and work for their family. TV made it possible.

And it's worked a treat. When I was a kid, one salary was enough to keep a family of four or five. Now it takes two.

Your latest article prompted me to inform you of a case that was discussed in our college circles recently. Two female friends of mine presented an idea of forming academic group concerning women (at first without defined agenda - just everything and nothing).

When I asked them about their relation to already existing organisation named Gender Studies they replied with disgust that it was impossible to
work together with man-hating feminists and insisted on going independently.

Those two decent young women with presumably honest intentions rejected cooperation with other women they described as 'being constantly at war
with everyone and sounding overtly lesbian'. I decided to find out then who is or what is exactly 'man-hating' Gender Studies. The group seems to be very well organised, with promotion campaigns, full timetable of conferences all over the university units and elsewhere. Looks strange
for a college where permanent lack of funds for academic activity is a daily complaint.

In fact Gender Studies appears to be part of larger project which is clearly indicated at their website. The proudly presented contributors
include: The Ford Foundation and Network of East-West Women (NEWW). Amnesty International is listed among other sources.

Even official aims of the group reveal sinister purpose: 'spreading the feminist thought and gender identity theory' and 'supporting the gay and lesbian rights'. There is nothing about women's rights there but a lot of hate and prejudice. However what is the reason behind funding for such radical enterprises which usurp the position of women's only legal representative? I started to dig deeper. The Network of East-West Women was launched in 1999 as part of international network covering whole
post-Soviet bloc area: Poland, Balkan states, Ukraine, Russia, Czech. Republic, Hungary, Kazakhstan, even Kyrgystan in Central Asia. The first unit was created in 1991 in Dubrovnik, Croatia (just as the Yugoslav Federation started to decompose in bloody conflict). Apart from Ford
Foundation and US Embassies the money for Polish section of NEWW comes from Open Society Institute , Stefan Batory Foundation, MacArthur
Foundation, European Union and Polish Ministry of Economy. It is no coincidence that Batory and Open Society are both creatures of Hungarian
'philantropist' George Soros. The same Soros who brought Jeffrey Sachs as an adviser for Polish 'shock therapy' reforms of early 90s launched
Batory Foundation in 1988. Looks that destabilised society remains one of the means to create it 'open' to economic looting and accept enduring slavery. I very much hope for time the people become finally awakened and define what are their true rights, not privileges for radicals, minorities or endangered species. A

As I mentioned the story of my female friends, there is still enough sane rationality among people to maintain that hope and act.

You can bet the Plutocracy knew this would come out eventually, and 'change' is already coming. The sweeping abortion 'reform' bill signed by Obama as his first Presidential act removed previous restriction for foreign based NGO's and foundations to lobby and set up abortion/gay propaganda in US schools. That opens the door to the UN to take direct management of child brainwashing and the teeth to impose UN commissars direct legal power to charge parents with various 'abuses' - like teaching their children anything which contradicts the new curriculum. The UN has been creating front orgs for a long time already with the faces feminists want to see.

I think the greatest problem in the world today is the physiological basis of intrinsic, normal human nature has been hijacked. Now we deal with generations of people programmed this way from infancy. Most people now are conditioned to focus on feelings, not facts.

"This shift from factual education to feeling and experience-based learning began over seventy years ago. Through the decades, the strategies used to manipulate minds in the Soviet Union and Nazi Germany were developed, first at the Tavistock Clinic near London and later at Germany's Frankfurt School (originally called Frankfurt Institute for Social Research). Their mind-bending methods soon spread to a rising number of psycho-social research centers in America. They were fine-tuned at Columbia, Harvard, Stanford and other American universities, at our regional educational laboratories [7] and at the Aspen Institute for Humanistic Studies where Elian Gonzales was remediated in preparation for his return to a Communist system. (See Elian Starts Re-Education) "
http://www.crossroad.to/articles2/brainwashing.html