Breivik a False Flag to Discredit the Right

This is a drawing shown on a daily basis with reports from the trial in Norway's largest "news" paper Aftenposten.

"Thousands Gather in Norway Thursday to Denounce Breivik" (and everything he supposedly stands for!)

Anders Breivik's murder of 77 leftist students is a false flag intended to discredit the nationalist causes he pretends to espouse.

The massive demonstration Thursday is a form of brainwashing that consolidates support for immigration, multiculturalism, Zionism, socialism and world government. This is why the police did not respond in a timely fashion. This is why this mass murderer was taken alive and is being treated with kid gloves. He is an Intelligence agency asset.

Essentially it is the same tactic used on Jews or Americans (9-11) : false flag attacks by their "enemies" indoctrinate and mobilize them.

During the third day of his trial, The Guardian reported how Breivik

" insisted that his goal (in the short to medium term) was to make pariahs of Europe's nationalists - the very people with whom you might expect him to feel kinship. 'I thought I had to provoke a witchhunt of modern moderately conservative nationalists,' he said.

Then he claimed that this curious strategy had already borne fruit, citing the example of Norway's prime minister, Jens Stoltenberg, who he said had given a speech since the attacks saying that critics of immigration were wrong. The effect of this 'witch hunt', said Breivik, would be to increase 'censorship' of moderately nationalist views, which would 'increase polarization'. The effect of this, he said, would eventually lead to 'more radicalization as more will lose hope and lose faith in democracy'. Ultimately, he said, these new radicals would join the war he has started to protect the 'indigenous people' of Norway and western Europe."

I could not pass this one up. The media circus in Oslo around the trial of the century has left me speechless, but not surprised. 7/22 was the excuse to clamp down further on the "free" folks in Norway, just like 9/11 here. Then this in today's paper - the irony was just too much. Link is for visual effect.
http://www.aftenposten.no/nyheter/iriks/22juli/40000-samlet-pa-Youngstorget---Den-samme-folelsen-av-samhold-som-etter-22juli-6815047.html
How to brainwash a population and make them believe they are as free as a bird while under complete control by their so-called leaders. It's a piece of cake in Norway. 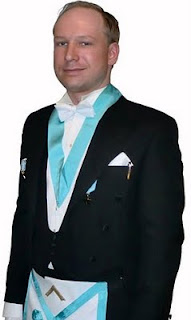 The "lone nut" and accused killer of the July 22, 2011 massacre in Norway, Anders Behring Breivik,  had the audacity to claim in court that Pete Seeger's song "My Rainbow Race" is an example of Marxist indoctrination of children. This is how he marshals support for diversity, Zionism, socialism and world government.

A call to arms was advertised and around 40,000 in Oslo answered and met downtown to protest this claim, not realizing they are being brainwashed. They all are indoctrinated from cradle to grave. The irony of it all.
The arms were innocent enough; roses everywhere and everyone singing "My Rainbow Race" both in Norwegian and English. That will teach the "lone nut".......maybe not. The same scene unfolded in another two dozen cities across the country. Jens Stoltenberg, the esteemed prime minister, twittered a "thank you to the world's most beautiful rose choir".

The crowd claimed they were taking back the song. No report of a response from Pete Seeger yet, perhaps too soon.

Makow comment: Clearly Breivik's assignment, much like Hitler's was to discredit the causes he pretends to espouse. Masons like Breivik are really  pro-Marxist, pro-Illuminati world government. Illuminati insider Christian Rakowsky (Chaim Rakover) said the real aim of Freemasonry is to "create all the required prerequisites for the triumph of the Communist revolution."


"The extreme right has traditionally been seen, often with good cause, as anti-Semitic - and yet now we see many examples of the anti-Islamic far-right openly embracing Zionism and Zionists. Anders Breivik was himself an avowed Zionist, his 1515-page manifesto containing multiple references to his firm belief that Israel is an ally which must be strongly defended by nationalists at all costs. Breivik was also of course an avid follower of such anti-Islamic, pro-Zionist writers as the American blogger Pamela Geller. "

Comments for "Breivik a False Flag to Discredit the Right "

Breivik committed his crime on 22/7/2011 (adds to 33).
Coincidentally (?), 22/7/2005 is the date the Police shot dead an innocent Brazillian, Jean Charles de Menezes,
on the London Underground six years earlier to the day! (They had 'mistakenly' identified him as one of the plotters
of the bombings two weeks earlier on 7/7 and shot him in the head seven times)

All that not agreeing with Jens Stoltenberg is labelled an extremist
in Norway today, by media and high paid govenment officials be it in academia or politics ..

Is it really so extreme to be against George Soros normally
sosialistic rose revolutions?

Roses here and roses there. The indoctrination of children in the one and only political correct jensuitic teachings is not good.
'Rose-revolutions' from George Soros Open Society Institue, vwe had them all over the world the last years, and never had any good fruits harvested from any of them, whether they are red, yellow or orange, it is different wrapping but same shit.
http://en.wikipedia.org/wiki/Rose_Revolution
http://en.wikipedia.org/wiki/Colour_revolution

"The Latin phrase sub rosa means "under the rose" and is used in
English to denote secrecy or confidentiality, similar to the Chatham House Rule.

From my perspective the causes and affiliations Breivik is involved with or approves of puts him in the leftist satanic catagory.
To be pro homosexual, zionist and a freemason is to be satanist and leftist... Not exactly a standard bearer for christianity and conservatism
if you ask me. With that in mind one has to admitt that the alleged conservative parties of the western nations are political false flag operations.