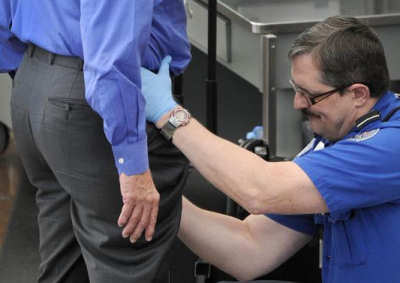 The TSA airport pat down is designed to desensitize society to sexual exploitation, part of our induction in the lowest rank of a satanic cult, the Illuminati.


by Servando Gonzalez
(for henrymakow.com)

Complaints  of sexual molestation by Transport Security Administration employees  at U.S. airports are growing in number and intensity. Hundreds  of cases of adult male and female TSA employees intimately touching private body parts of adult and children passengers have been  documented - some of them graphically.

More recently, in a culmination of accusations against TSA officers'  behavior, former Minnesota Governor Jesse Ventura has taken steps  to sue the TSA and the Department of Homeland Security, naming  their chiefs John Pistole and 'Big Sister' Janet Napolitano  in a lawsuit that involves invasive airport pat-downs.

Ventura has accused the agencies of violating his 'basic  rights to privacy and dignity, and his right to be free from unreasonable  searches and seizures." Moreover, he alleges the pat-down  TSA officer performed on him included "warrantless, non-suspicion-based  offensive touching, gripping and rubbing of the genital and other sensitive areas of his body,' which, the lawsuit contends,  met 'the definition for an unlawful sexual assault."

Though the complicit mainstream media have mostly ignored the  problem, some of these cases of genital groping have been published  on the Internet. Unfortunately, however, these cases have been  erroneously (as in the case of Governor Ventura) or disingenuously  described as "sexual molestation."

The growing problem, which in their arrogance the Director of  Homeland Security and the government has refused to acknowledge,  indicate several things. Cardinal is the fact that the indiscriminate  searches of American citizens without a warrant or probable cause  is a violation of the 4th amendment of the U.S. Constitution.  Another is that, in this era of continuous fight for growing so-called  gay rights, it is obvious that using non-gay or non-lesbian  employees to grope gay and lesbian passengers is a gross violation  of the so-called gay rights.

But, given the long history of gays fighting the government for  trying to intrude into their bedrooms, it seems strange, to say  the least, their inaction faced with a government that now is  getting into their underwear. Simply, this doesn't add up  . . . unless there is more than meets the eye in the TSA homo-molestation  case. May it be that some TSA employees are sexually enjoying  the homosexual molestations?

The unavoidable fact is that, under the tenuous pretense of protecting  American citizens from terrorist attacks, the TSA is terrorizing  the American people and, therefore, has become an anti-American  terrorist organization. But the TSA is not the exception. Actually,  since the very beginning of this strange, non-ending, ineffective  war against terrorism, the US government's main goal seems  to be to terrorize the American people. This has reached a point  where only the most dyed-in-the-wool Republicans still believe  that we are safer than before the 9/11 events.

But, despite complaints of TSA inefficiency, we need to recognize  that, on the contrary, the TSA is doing an excellent job, and  the results are evident. Obviously, the TSA's job is not  catching terrorists or protecting us. Its true, secret role is  desensitizing the American people into accepting without complaints  the government's intrusion in our private lives. The totalitarian  communo-fascist society the Council of Foreign Relations conspirators  called the New World Order needs sheeple, not free men, and the  TSA is playing a key role in the conversion process.

In the late 1940s, totalitarian-minded psychologist B.F. Skinner  developed a system of behavior modification he called "operant  conditioning." In his 1972 book Beyond Freedom and Dignity  --a quite revealing title--, Skinner expressed his idea  that deep-rooted belief in individual freedom and moral conduct  interfere with the possibility of using scientific methods to  modify behavior aimed at building a happier and better organized  society --exactly the type of society the CFR conspirators  disingenuously want us to believe is the New World Order they  have in mind.

In a nutshell, operant condition means rewarding behavior the  manipulators consider appropriate and punishing behavior they don't like. Obviously, this is exactly what most government  agencies have been doing in the last fifty years. Today, after  the creation of aberrations like the OHS and the TSA, this has  become so pervasive that it is almost impossible not to see it.

Cardinal among these types of behaviors that need to be punished  is any attempt to exercise the rights allegedly guaranteed by  the US Constitution. Just a perfunctory reading of the policy  documents created by the Office of Homeland Security show that  their main enemy is not foreign terrorists, but patriotic Americans  who see their freedoms jeopardized by big government.

Unfortunately, as I mentioned above, both the OHS and the TSA  have been doing an excellent job and the results are evident.  The mass of complacent sheeple is growing in number and its capacity for tolerating abuse seems limitless. And, as a bonus, either  as a result of policy, personal inclination of its bosses and  employees, or sheer homosexual pleasure, they have joined public  schools in contributing to lowering the moral threshold for an  even wider acceptance of homosexuality, particularly in the impressionable  minds of young children. NAMBLA* pedophilics must be extremely  happy with the good job TSA is doing on their behalf.

He also hosted the documentaries Treason in America: The Council  on Foreign Relations and Partners in Treason: The CFR-CIA-Castro  Connection, produced by Xzault Media Group of San Leandro,  California.
His latest book, Psychological Warfare and the New World Order:  The Secret War Against the American People just appeared  and is available at Amazon.com .  Or download  a .pdf copy  of the book you can read on your computer or i-Pad.

I am a 60-year-old Christian woman who shares your articles and web site frequently at our church. We are a small bunch, but very aware of what is really going on in this world.

I read your article with my satanic-versus-God's people attitude. God's people stand for honesty, morality, family, courage, everything helpful to the human condition. The satanic oppose all that. And unfortunately, they have subverted our governments which now lawfully condone immorality and oppose anything which builds family values. In a nutshell: homosexuality is a weapon against us.

Over the last few years, I have become aware of another campaign to dissolve heterosexuality. This is the "pink ribbon" campaign for breast cancer awareness. That little pink ribbon symbol is everywhere now--on women's clothing, lunchboxes, thermos, flashlight batteries, Campbell's soups and other groceries, greeting cards, on and on. First of all, I found it fascinating that the number one killer of women in this country is heart disease; yet the pink ribbon took off like a rocket--why?

If I may speak frankly to my brothers and sisters, it is because breasts get more attention than the heart! And with that attention to their cause, they repeatedly hammer these ideas into our heads:

1. Women: your breasts will become diseased.

3. You will be reminded with a barrage of products, nearly everyplace you go, of diseased breasts.

More and more products jump on the bandwagon to show they "care". There are "survivor runs" for those who have survived breast cancer. They wear pink ribbon-designed shirts. Now, when you see a woman outside of that scene, wearing the pink ribbon clothing or pin or such, is she a survivor or just a sympathizer? Are her breasts diseased? As a society, we know the consequences of cancer--the unpleasant mental pictures come forward of doctor visits, biopsies, mastectomies, radiation, sickness, recurrences.

I contend that the satanic/homosexual elite are trying to make women seem undesireable by demeaning the breasts. At the very least, all this is stressful to women. It is suddenly so huge a problem, they would have us believe. Next time you go shopping at a grocery or a department store, every time you see a pink ribbon on a product, say to your self, "breast cancer." Keep track of the number of times you say this at that store--you will be amazed.

The good news is that their campaign does not seem to be working, at least to the extent that they hoped. Guys still love women's breasts. No guy I know of has turned to homosexuality because a woman might someday get cancer of the breast. But I see videos and movies which have a male character in them which is either homosexual or cross-dresser, whatever, and they often have breasts implanted or are wearing clothing to insinuate the presence of breasts. So, we have here another motivation for this pink ribbon fiasco: jealousy.

So, Mr. Makow and all you guys reading here: thank you for being aware of the forces against us.