Turkey's "Donmeh" are the Illuminati Prototype 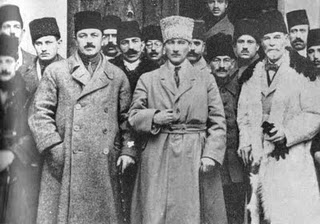 (l. "Young Turkey."  Kemal Attaturk and fellow Donmeh Jews who took over Turkey by pretending to be Muslim.)

Who are the Illuminati? The term seems fanciful and elusive. By exposing their handiwork in Turkey, Wayne Madsen identifies the satanic cult that has hijacked the world.


In a revealing article Wayne Madsen argues that recent Turkish-Israel friction is due to Turkey reclaiming its Islamic character from the "Donmeh", the crypto Jews who overthrew the Ottoman Sultan in 1908 and turned Turkey into a "secular" state.

The attack on the Gaza flotilla was in retaliation for Turkey jailing several top Turkish military officers, journalists and academics accused of being part of the Donmeh plot to overthrow the AKP government in 2003.  [In 2013, this now seems fanciful. The flotilla was staged to give Erdogan some credibility. He is Donmeh himself.]

In a second article, he argues that the Ibn Saud dynasty is also Donmeh. Their fundamentalist Wahhabi religion was intended to sow division in Islam. This accounts for Saudi support for the establishment of Israel and a recent warming of relations.

The example of the Donmeh extends far beyond the Middle East. The Donmeh are part of the original Illuminati. They are Cabalistic Jews, Sabbatean Frankists, Satanists. Everything Madsen says about the Donmeh in Turkey also applies to the Bolsheviks in Russia and to the Illuminati in the United States, England, France, Germany and most of the world. 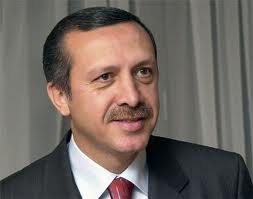 The real history of the modern world is its (political, economic, cultural and spiritual) takeover by this satanic cult. On the other hand, Turkey's ability to overthrow Donmeh control and reclaim its national destiny is a hopeful sign and inspiration.

This cult will do everything it can to be invisible and to divert our opposition elsewhere. That's why it's more important than ever to identify it.


LEARNING ABOUT THE DONMEH

The Donmeh are the Marranos of Turkey.  The Donmeh are "a sect of Turks descended from a group of Sephardic Jews who were expelled from
Spain during the Spanish Inquisition in the 16th and 17th Centuries."

They pretended to convert to Islam but in fact practised the Cabalist Satanism of Sabbatai Zvi and advanced a "secular" and Zionist agenda.

Just as their Bolshevik counterparts were attempting a revolution in Russia in 1905, the Donmeh organized themselves as "Young Turks" and deposed the Ottoman Sultan Abdulhammid II in 1908.

The Sultan was vilified but his only crime was refusing Zionist bribes to hand over Palestine. "The Jews may keep their money and their millions.." he said. "I cannot sell what is not mine. It belongs to the entire Islamic nation."

Does this sound familiar?  Arab leader thwarts Illuminati plans. Suddenly he is deposed in a convenient "revolution." Power to the people! Freedom! Abdulhammid dies in jail.

Turkey is stripped of its Islamic identity in the name of "secularism." Secularism is a transitory step to satanism.

Sound familiar to Christians living in Europe and the US?

Madsen says the Donmeh "may have represented 1.5 million Turks and [their power] extended to every facet of Turkish life." Familiar? 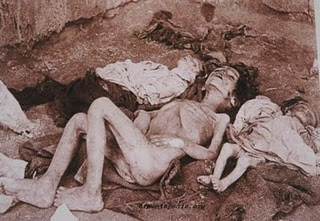 Just as the Bolsheviks would massacre Christians and raze churches, the Donmeh slaughtered the Armenians, who were Christians and represented competition. This was the first modern genocide. Between one and 1.5 million people were killed. According to Wikipedia:

"The starting date of the genocide is conventionally held to be April 24, 1915, the day when Ottoman authorities arrested some 250 Armenian intellectuals and community leaders in Constantinople. Thereafter, the Ottoman military uprooted Armenians from their homes and forced them to march for hundreds of miles, depriving them of food and water, to the desert of what is now Syria. Massacres were indiscriminate of age or gender, with rape and other sexual abuse commonplace."

Tallaat Pasha (1874-1921), the Donmeh Interior Minister of Turkey during World War I and Grand Master of the Scottish Rite Masons in Turkey was the chief architect of the Armenian Holocaust. He wrote, "By continuing the deportation of the Armenians to their destinations during the intense cold we are ensuring their eternal rest."

The Armenian Genocide foreshadowed the massacre of Christians in Russia, the Ukrainian Holodomor, and other Communist (Illuminati) atrocities in China, Cambodia and during World War Two (Hamburg, Dresden, Hiroshima etc.)

It also foreshadowed the Jewish holocaust, where the Illuminati Jews sacrificed "their lesser brethren" (non-Sabbatean Jews) in order to reap the capital (moral and otherwise) needed to establish the Sabbatean State of Israel.

The Illuminati's bloodstained past does not augur well for the future. 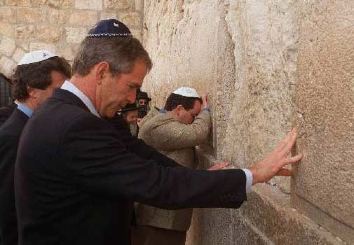 My hunch is that the Illuminati follows the Donmeh pattern. They are Cabalist Jews, half-Jews and crypto Jews. They appear to include generational satanists from all other ethnic backgrounds.  They form a Masonic or Cabalist secret society and participate in satanic rituals like human sacrifice.

There is no question that this cult controls Europe, the USA, Canada and Australia. It probably controls Russia, China, India, Japan and South America too.

Most American Presidents belong to the Illuminati. Obama, Bush, Clinton, Reagan, Carter, Johnson etc. All GOP Presidential candidates must belong to this club. Herman Cain is a Master Mason in Prince Hall Masonry. So is Obama. Bush and Kerry were both Skull and Bones.

It's easy to get distracted, to blame capitalism or socialism and reduce the debate to that. The debate is between God and Lucifer and the people who represent them.

The Illuminati represent Lucifer and they have pretty much taken over. They control the banks and corporations, the government, education and the mass media. We are in the late stages of a long-term conspiracy.

But if Turkey can throw off their bondage, perhaps we can too. The first step is to identify the foe and not be distracted by their stratagems.

Comments for "Turkey's "Donmeh" are the Illuminati Prototype"

Related to the issue of Donmeh influence in Turkey, here's an article that suggests Erdogan is Jewish.

I often tell people that the real Axis of Evil is the US, Britain, Israel, Saudi Arabia and Turkey. And people say, "Turkey?!"

It's not coincidence that Sibel Edmonds happened to discover a hornets nest by first being exposed to Turkish involvement in American affairs.

And people forget that this relationship goes all the way back to the French Connection, where heroin on its way to Europe was smuggled first through Turkey.

True enough the Turkish people are steady on doing unto their own people, feeling it is justice they administer on behalf of their Illuminati bosses in the international banking industry (Rothschild Zionists).

Another group the bears some mention within the same ranks, due to their great ability to decieve and serve the Illuminati agenda; the American Black Muslims, first started by Elijah Mohammed and are now led by the Minister Louis Farrakhan. Although both men have been continually outspoken since the group's inception, Farrakhan has let his mouth get him into more trouble than any other minister of the sect.

Earlier today, I heard a report featuring the Minister Farrakhan just blasting the mainstream media and accusing them of being bought and sold for profit by the globalist powers that be. The truth is that Farrakhan is one to talk because he has been bought and paid for and is owned by the very same globalists he accuses of owning the media and such. The Minister Farrakhan is a thirty-third degree Freemason, who I have not doubt was involved in the assassination of Malcom X and other seekers of truth. Farrakhan, then known as Brother Louis X from St. Louis, was nothing but a proxy to Elijah Mohammed, the man that utilized the skills of the Sunday 'pimp' into the Black Muslims, by siring children with younger women in the sect. This is what caused the late Malcolm (El Haj Malik el Shabazz) X to split from the Muslims.

The "Donmeh" have provided a fine example for American Black Muslims!

Good article (Turkey's "Donmeh" are the Illuminati Prototype), however, Charles has a good point when he said: Can we frame the genocide of the native American in this analysis of Satanists? How do you categorize these genocides and many others in the past human history?

I am not an expert on the US genocide of the Indians, but the usual suspects (Freemasons etc.) have always been in charge,
and are probably responsible.

I certainly agree about Ron Paul. He's an illusion and shill. I see nothing but more empty talk with this guy. Ron and son Rand are masons.

In the last presidential election Ron Paul abandoned his supporters when he played partisan politics and dropped out because he didn't get the Republican Party nomination. Some said he did that so he could remain Republican and still get endorsement for his Representative position.

I see him as the 50 percent solution: lots of talk about populist ideals, but little accomplishment.

Can we frame the genocide of the native American in this analysis of Satanists?

If we can, we would need to start with Spain, the Reconquista, and that same expulsion.

The Church started killing unbelievers as early as the 4th century. The killing (often with torture) of heretics, church splinter groups, dissenters, atheists, agnostics, deists, pagans, infidels and unbelievers was supported by almost all mainstream Christian theology for over a thousand years, starting with the intolerant St. Augustine (died 430 AD). Christian thinkers such as St. Thomas Aquinas continued to justify the killing of heretics and unbelievers throughout the medieval period. St. Thomas Aquinas justifies killing people who are not convinced by his arguments. See the Summa Theologica, 2nd Part of the 2nd Part, Question 11, Article 3.

The Donmeh are the springboard to understanding just how the Illuminati came to rule the world. The Donmeh are surely a prototype, perhaps the least subtle as their existence is known. More subtle are the "Donmeh" families of the rest of the world.

The Illuminati delight in hierarchal government as they can control it by installing their man at the helm. Like leading a bull by it's nose ring, our leaders lead us. How many of our leaders are genetically linked to Shabbatai Tzvi? While this question appears to border on lunacy it may very well be the first step towards our liberation.

It is known that most of the U.S. Presidents were somehow related to each other. Their ancestors came from The Netherlands, England, Scotland and Ireland. These coastal countries were popular destinations of crypto-Jews who fled the Spanish inquisition by boat. Never welcomed back into the traditional Jewish fold they embraced the Jewish messiah who also went "underground" to complete his mission.

"Does this sound familiar? Arab leader thwarts Illuminati plans. Suddenly he is deposed in a convenient "revolution." Power to the people! Freedom! Abdulhammid dies in jail.

Turkey is stripped of its Islamic identity in the name of "secularism." Secularism is a transitory step to satanism.
Sound familiar to Christians living in Europe and the US?"

Absolutely. In my opinion atheism invariably leads to nihilism, and ultimately to the 'illumination' of Luciferian initiation.
Ultimately any human mind must confront the fact of human mortality which brings with it the realization of a higher power. The greatest delusion of Modern atheists is that they're useful idiots in a long term business plan they don't know about.