US Ambassador is Martyr to Zionist Ambition 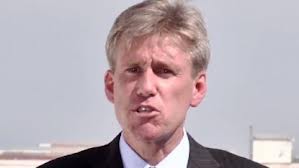 Christopher Steven's murder
appears timed to inflame US opinion against Muslims, and by extension Iranians. An Israeli attack on Iran is imminent.
by Henry Makow Ph.D
Christopher Stevens, the US ambassador to Libya murdered earlier today was a martyr to Zionist attempts to draw the US into war with Iran.
The attack on the US consulate in Benghazi was prompted by an insulting film made by  Zionist Jews that depict the prophet Mohammed, and Muslims in general, as killers and perverts.
This is taking place as Israeli Prime Minister Benjamin Netanyahu is ratcheting up pressure on the US to attack Iran, or to support an Israeli attack.
Christopher Steven's  fate is an object lesson for all Americans. Zionists are happy to see Americans die fulfilling Zionist goals. On Monday, we commemorated the 11th anniversary of the false flag attack on the World Trade Center, which has Zionist fingerprints all over it.
If Obama is indeed resisting Zionist pressure, I say "Bravo." Zionism is a pernicious force which has less to do with a Jewish homeland than with Sabbatean Jewish (Illuminati) world domination.
By what logic should Israel or Pakistan have nuclear weapons but not Iran?
Israel has sufficient deterrence to ensure Iran would never use them. No, the real objection is that Iranian nuclear weapons prevent  Zionist conquest, for which they are a pretext, as in the case of Iraq.
The film which provoked Muslim outrage is a gratuitous hate crime but since Jews define "hate" (as anything they hate,) the director Sam Bacile, 56, has not been charged. Nor have the more than 100 Jewish donors who financed the $5 million effort. 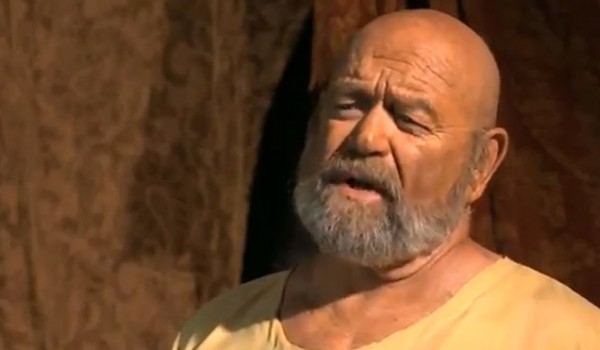 "Speaking by phone from an undisclosed location Tuesday, writer and director Sam Bacile, left, remained defiant, saying Islam is a cancer."
Bacile, a California real estate developer who identifies himself as an Israeli Jew, said he believes the movie will help his native land by exposing Islam's flaws to the world.

"Islam is a cancer, period," he said repeatedly.

"The two-hour movie, "Innocence of Muslims," the film claims Muhammad was a fraud. An English-language 13-minute trailer on YouTube shows an amateur cast performing a wooden dialogue of insults disguised as revelations about Muhammad, whose obedient followers are presented as a cadre of goons.

"It depicts Muhammad as a feckless philanderer who approved of child sexual abuse, among other overtly insulting claims that have caused outrage.
The film is obscene and portrays Mohammed as a bastard and a pedophile who performs lewd acts. It portrays atrocities by Muslims against Christians which the Muslim authorities condone and blame on Christians. This is ironic since Zionists are inciting attacks against Americans and blaming Muslims.
Christopher Stevens was not the first, and won't be the last  American to die because of US servitude to Zionist ambition, which ultimately is to enslave them.
The political, economic, mental and spiritual phase of this enslavement has largely taken place. None of the network TV news programs mentioned that the video which incited this anti-American activity was made by Israelis. Just as in 9-11, the news media are active Zionist collaborators.
They did mention that when the US Embassy in Cairo distanced itself from this film, and apologized for offending Muslims, both Obama and Romney rejected this gesture as a failure to defend "American" values.
Of course, they aren't surrounded by angry crowds. At least, not yet!
---
Blackhawk Down, Somali Style Torture & Dragging of Ambassador's Body Through Street
The Irony that Gaddafi Was Murdered in Same Fashion by US-backed Goons & Hillary Clinton Just Laughed 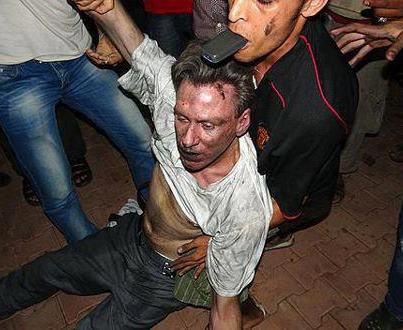 left - US ambassador to Libya, Chris Stevens, in the hands of Libyans who are not paid by the CIA.
First Comment- from Dan
Back to the latest violence, Stevens ' began his career with the State Department in 1991 as Political Section Chief in Jerusalem.   When US diplomatic relations with Libya were re-opened by Gaddafi in 2006 - 2009,. Stevens was there in the role of Deputy Chief.  But the US diplomatic mission to Libya was a Trojan Horse.  They were setting the stage for the NATO coup d'tat. The 'Rebels' were mercenaries - that on other days the media calls 'Al Queda'.   Stevens is a man that lied through his smile to the Libyan government till the last minute, then slipped out of the country, and slipped back in as "Envoy to the Rebels"In a world where Illuminati governments "eat their young"  Stevens was set up - sacrificed - so that Obama and Hillary can "vow track down ambassador's killers". As this attack and killing actually serves the purpose of US State Department I'm calling it yet another false flag attack -- a pretext for war.  Do you wonder what went through Stevens' mind when he realized his own Masters had thrown him from the train? 2011: Hillary gloats and laughs over Gaddafi's brutal murder  "We came, we saw, he died"http://www.youtube.com/watch?v=Fgcd1ghag5YHillary's man on point got the same kind of death as Gaddafi.  http://joequinn.net/2012/09/12/american-ambassador-to-libya-reaps-what-his-masters-sowed/---
Latest- Zionists Covering their Tracks? Film Blamed on "Coptic Christians"

Comments for "US Ambassador is Martyr to Zionist Ambition "

Amid all the fury and media frenzy no one seems to be bringing up the FACT that Christopher Stevens WAS A MUSLIM himself. Perhapes this is why he was sacraficed so easily in this flase flag pshy-op. Even PressTV which had these revelations aired on its program has failed to highlight this fact in their news coverage of the situation. It appears the Zionist media including PressTV and RT don't want you to know this little fact.

He wa a martyr indeed; may he rest in peace.

In response to Titus: It would appear that this entire anti-Islamic film project was indeed a psy-ops program, based on the "revised" reports from government and the news media.

So now we are told that there is no Sam Bacille, no 100 Jewish donors and only a handful of Zionist Christians (both American Dominionist and Egyptian Coptic for those who like to keep their scorecards updated) behind this propaganda bomb. And yet still no official Department of Homeland Security intervention. In fact, government reports are stressing that the Egyptian Coptic character being investigated for his direct involvement in the film's production is only being targeted for parole violations and NOT any freedom of speech issues.

Yes, one can definitely sense the stench of a major intelligence operation and one that has already achieved a dualistic objective: inciting unrest within the Islamic world and reaffirming the underlying pro-Zionist, anti-Islamic bias of the United States government.

The world really needs to see the truth, there needs to be a list released of the 100 jewish donors to the anti-islamic movie. America is being sold a lie again, this is an obvious psyop.

This is in response to your excellent essay "US Ambassador is Martyr to Zionist Ambition". You write:

The film which provoked Muslim outrage is a gratuitous hate crime but since Jews define "hate" (as anything they hate,) the director Sam Bacile, 56, has not been charged. Nor have the more than 100 Jewish donors who financed the $5 million effort.

Indeed, you nailed it. Bacile even admits that the film was political, not religious, in its intent. Wasn't the justification for all of this Homeland Security legislation supposed to be to target terrorism? Aren't its unconstitutional provisions defended on the basis of national and international security threats being equivalent to treasonous conduct?

If the intent of this film was political propaganda and not religious enlightenment, then isn't that propaganda an obvious weapon of terror? Was not the intent of this film to enrage the Islamic community and provoke the violence and conflict against the United States and Israel which has ensued its release? Is this really any different than a 9/11-type of attack, other than the medium of delivery? So why do we see no attempt to investigate and charge the perpetrators of this blatant act of terrorism?

Henry, what would be the official reaction if a group of U. S.-based Islamic fanatics had produced such a project desecrating and vilifying the Jewish patriarchs and their religion? Can we doubt for an instant that those involved would be facing a plethora of legal reprisals under hate laws, anti-terror legislation and Morris Dees civil actions? To prove my point, have you picked up a copy of The Turner Diaries or Secrets of the Federal Reserve at your local Barnes and Noble store recently? So the message is crystal clear: Zionists have carte blanche.

What a shame, because like you I believe that Zionism is only a means to an end for this satanic Global New World Order, but it's hard to muster sympathy for a group that jumps through every hoop placed in front of them like a trained circus act. Jews need to reject Zionism. It is not their core religion, and it is intended to ultimately destroy, not prosper them.

Very interesting piece re our diplomat's assassination in Libya.

Obviously the cave people are fascinated by numerology.

This pervert that made this movie is deliberately provoking Muslims. He calls Islam a cancer.

I know this 90+ years old Jewish man who survived Auschwitz and is a member of a Dutch Jewish organization called - A dissent Jewish Voice= This wonderful old man is very clear about what he thinks of and feels for Israel! He calls Israel a cancer that MUST be cut out.

Iran says just about the same about Israel and that is most likely one of the reasons Israel is so eager to attack Iran. Why don't reasonable and intelligent people see that Israel is a very real danger to all the people in the world even to their own people? We all know that these Illuminati Jews caused the terrible ordeal the ordinary Jews had to suffer during WW2. Zionism can be seen as a mental disease. The Illuminati are nothing but very mentally twisted megalomaniacs.

I guess, the US-Israeli agencies sacrificed the ambassador to generate anti-islam anger in the American public, just in time, when the majority is against an Iran-adventure.

The Baghdad-Embassy is a huge fort, why was the ambassador in Benghazi defended by TWO MARINES in an undefendable house???
The Libyan uprising was the USRAELI-services' job, they have their people over there on the streets.

Before you can get Americans to go kill people in the middle east, you first need to kill some Americans, which is basically what happened in Libya yesterday.

We'll have to wait and see what comes out, but just like Israel, primarily, with the help of inside people in the American government (largely Jews) did 9-11, I wouldn't be surprised if they have their fingers in Libya too and are blaming it on people other than themselves.

Henry, excellent article. The whole problem is that America is ruled by the bread that the Rothchild Federal Reserve prints out of thin air. Until that changes the Zionist "choke hold" on America will continue to subvert them. This is why John Kennedy printed 4 billion dollars of debt free currency in 1963, shortly before he was murdered.

I think the United States and its allies would have done better in all respects to absolutely abstain from any kind of involvement with the middle east and Israel. Those that don't like that are free to move to the middle east and involve themselves there and at their own risk and expense.

North Americans and Europeans can do quite nicely without those trouble makers and fanatics. Let the Jews and Muslims settle their differences on their own.

This would make sense in a world where our national government had not been replaced by an alien power, and actually represented the interests of the people.