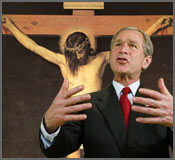 George Dubya's justification of the Iraq war reminds me of a thug who breaks down my door, murders my family steals my money and then intones that he is a Christian on a "Divine Mission."

Amid the rubble and corpses, he opens a Bible and invokes the "loving God behind all life" and says America is in "a conflict between Good and Evil." By aiding Israel he is going to usher in the Millennium and Christ's return.

Hold on a minute, George Dubya. Do you know what Jesus said about war?

Mathew 5:39: " But I say unto you, that ye resist not evil; but whoever shall smite thee on thy right check, turn to him the other cheek also."

Mathew 5: 44: " Love your enemies, bless them that curse you, do good to them that hate you, and pray for them that despitefully use you and curse you."

Mathew 6:14" "If ye forgive not men their trespasses, neither will your Father forgive your trespasses."

In summary, Jesus taught that all men are brothers and should love one another. God is Love and men should take pains to avoid conflict. If Dubya believes in Jesus, he has a funny way of showing it.

Bush belongs to a family that were errand boys for the world's richest families. Grandfather Prescott was an investment banker who served the Harrimans, railroad barons beholden to the Rothschilds. In the 1930's, Prescott helped finance Hitler's war machine.

All three Bush generations were products of the Masonic "Skull and Bones" Society at Yale. This secret society is devoted to the service of Lucifer through the reign of the superrich. Satanism is the true religion of the world's so-called elite.

George W. Bush's bible is the New World Order, a multigenerational Masonic plan to dissolve all human loyalties (nation, family, race, religion) and establish a global tyranny run by the banking cartel. This cartel controls the other cartels, media, defence, pharmaceutical as well as illegal cocaine and prostitution. World government will be cosseted in Orwellian doublespeak: "peace, democracy, human rights and freedom."

The purpose of the Iraq war is to break down the resistance to world government by the world's mostly devout 1.3 billion Muslims. Israel is the instrument of this policy. Unknown to most Jews, this is the hidden agenda behind elite support for the Jewish homeland.

According to an article in Israel's Haaretz newspaper, the Iraq war "was conceived by 25 neo conservative intellectuals, most of them Jewish." Many of the same people (e.g. Richard Perle, Douglas Feith) were members of a Likud party think tank that recommended in 1996 Israel "shape its strategic environment" beginning with the removal of Sadaam Hussein. A secret addendum to this plan, I surmise, was the elite-orchestrated Sept. 11 atrocity.

NY Times columnist, Thomas Friedman told Ha'aretz: "These people had an idea to sell when Sept. 11 came, and they sold it. Oh boy did they sell it ... if you had exiled them to a desert island a-year-and-a-half ago, the Iraq war would not have happened." (When Rep. Moran said this, he was accused of anti Semitism.)

Kristol continues: "[Americans] wanted a war driven by a moral vision. They wanted to hitch their wagon to something bigger than themselves.... If the US does not shape the world in its image, the world will shape the US in its image."

This is heavy stuff. The idea that "the world" wants to reshape the US is completely bogus. The elite is using a phoney war on terror to turn the US into a police state. It does not fear Muslims. It fears Americans because it is plundering their economic and political birthright. It will continue to squeeze Muslims and Americans alike in order to foster the terrorist reaction it needs to justify tyranny.

The idea that the US should "shape the world in its image" will certainly lead to world war. Where does this arrogance and disrespect come from? Is it American? Jewish? Elitist?

The idea that people need to "hitch their wagon to something larger than themselves" is typical Jewish Messianism rooted in the failure of Judaism to provide its adherents with a living God.

"Secular humanists," these Jews feel disconnected from the universe and purposeless. They feel connected to God only by building a worldly paradise according to their own often misguided and self-serving ideals. The elite, in the service of Satan's dominion, deceives and exploits them easily.

In 1933 Marine Corps General Smedley Butler described himself as "a high-class muscle man for Big Business, for Wall Street and the bankers... There are only two things that we should fight for. One is the defence of our homes; the other is the Bill of Rights. War for any other reason is simply a racket." http://www.fas.org/man/smedley.htm

The world hasn't changed since Butler's time because the same criminal conspiracy controls it. The people who caused World Wars One and Two are now orchestrating World War Three, which will pit the United States against Europe and Asia. The US is cast as the "heavy" but the divisions in the elite may be more apparent than real.

The devil loves war because it brutalizes, divides and negates human life. God loves humanity. The devil hates it. This is the essence of the cosmic struggle.

As long as we believe in God, we cannot be controlled. God is the principle of perfection innate in our soul, the faculty that tells us the difference between right and wrong, truth and lies. God is an ideal of beauty, harmony and love, which we all desire.

In conclusion, George W. Bush's only bible is the dog-eared new world order playbook. The president works for a global elite that uses the mass media, education and politics to stunt and manipulate us. As someone said, we are mushrooms: raised in the dark and fed manure.

For a glimpse of the elite's final goal, read Huxley's "Brave New World" or Orwell's "1984." We face an era of permanent war, austerity, corruption and ruthless dictatorship cushioned by lies, platitudes, drugs and mindless distraction. If the past is any indication, the future also may involve depopulation, eugenics and concentration camps.

Western civilization is teetering on the edge of an abyss. God's three-million-year investment in mankind is at stake. God has plenty of time. We do not. For the sake of our children, we must begin to take control of our destiny.