#Scamdemic - Are We Headed for Recovery or Dystopia? 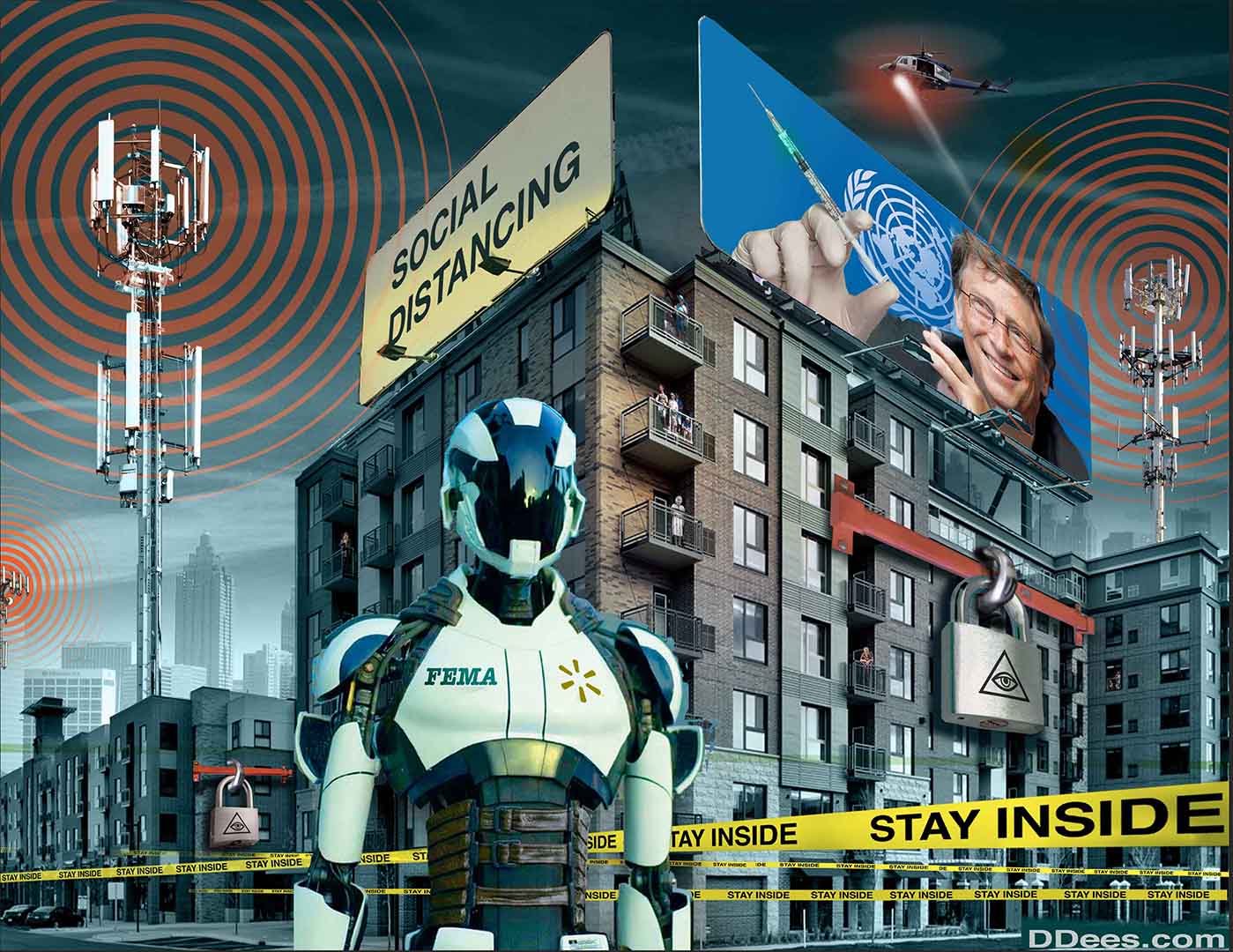 (credit. David Dees)
We are caught between two competing scenarios:
1) return to something resembling "normal" and
2) a descent into a dystopia
of mandatory vaccines and digital tattoos.
By Henry Makow PhD
1) The stock market is betting on a V-shaped recovery. The #scamdemic will end with the flu season, lockdowns will end and normality will return. Naturally, we hope this is the case.
However it makes no sense for the Illuminati to wreak so much havoc and suffering only to return to normal, unless this is a dry run for something even worse.
The Illuminati have the sheeple eating out of their hand. Why wouldn't they press their advantage to perpetuate their pet projects like mass vaccinations, digital passports and "global governance."?
A mother is arrested for refusing to leave a park with her children.  Fines for feeding the homeless? Repeat these gratuitous, ridiculous orders a million times world over to realize that the #scamdemic is about CONTROL. It is about a world police state.
The Rothschilds have all the money in the world. Now they  want total control.    Tech companies are developing social distancing tools.   They have drones that can monitor a person's temperature and coughing.  They can "quarantine" anyone they like. 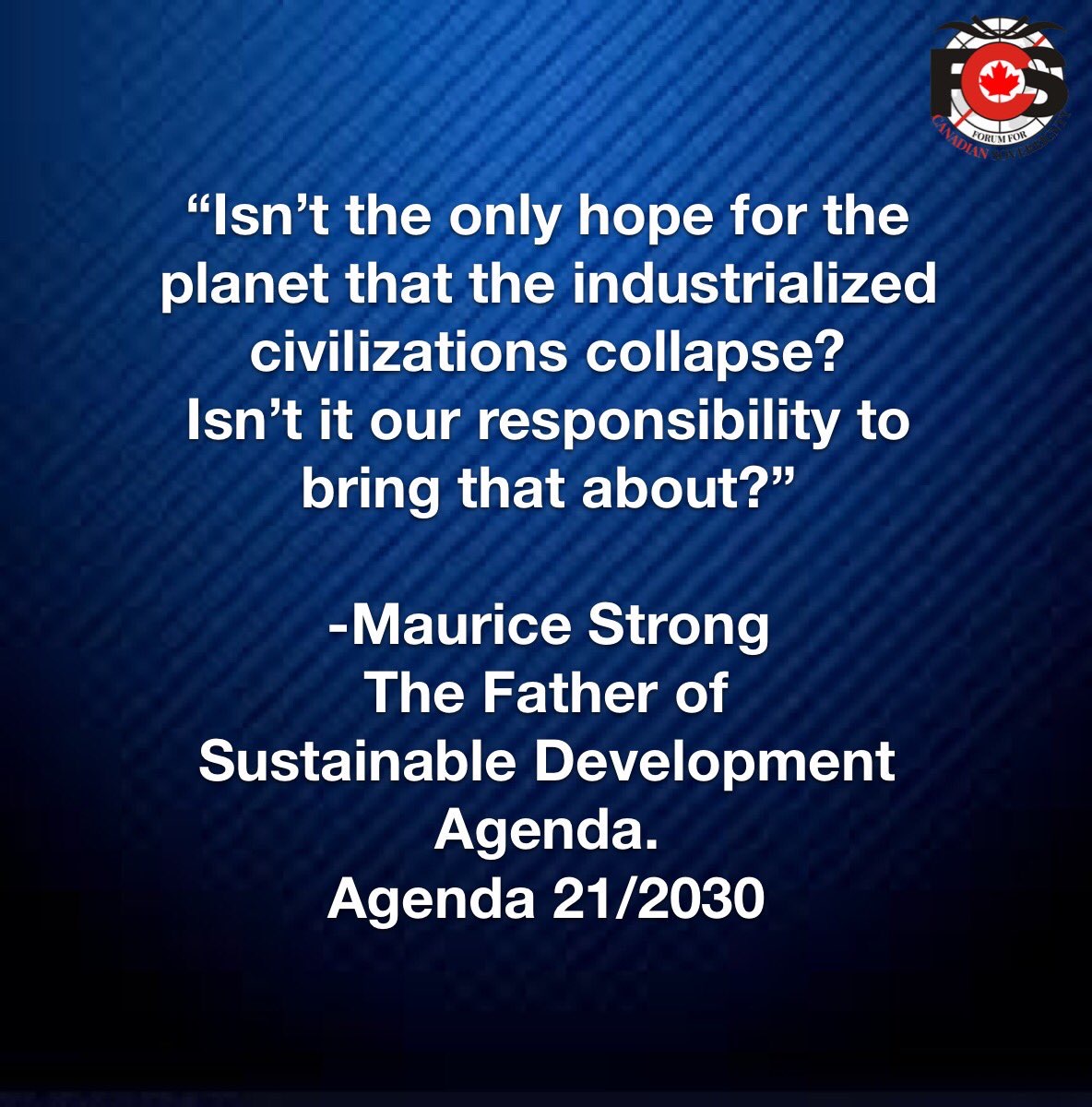 They also want to deindustrialize us according to Agenda 2030. Are they likely to give up their advantage by allowing a return to normality?
A hoax can be perpetuated indefinitely.
2.  Normally a country is conquered by an invading army. We have been conquered by a lie generated by the Illuminati controlled mass media. In other words, by virtue of a sleight of hand, they took over the mind of the population who then collaborated in its own self destruction.
In order to do this, Western society had to be conquered already. Virtually every sector that helped to perpetrate this hoax has been subverted. Medicine. Government. Mass Media. Business. Education. Justice. The military. With a few rare exceptions, American politicians are criminals, installed by the central bankers. The proceeds of crime are the payoff for treason.
This death wish is administered by Organized Jewry and Freemasonry which is Jewish Cabalism (Satanism) for goyim.  This societal cancer now manifests as this #scamdemic.

By virtue of handing our banking system over to people who want to destroy us, our society is already Communist (i.e. central banker controlled.) Our society is already dedicated to self destruction.  That's why an audacious, largely unquestioned hoax has been enough to give the economy a stroke, heart attack and nervous breakdown all-in-one.
3. The real objective of war is not political or territorial. The real purpose of war is to wreak havoc, suffering, death and destruction. The war is just a pretext. Our adversaries are Satanists.
Similarly, the #scamdemic is a war against society. Its real purpose is the same as a fighting war.  Although billions of people are suffering, we don't hear much in the msm about these individual tragedies. The pensioner confined to his apartment for months on end. The parents who lost their jobs and can't feed their children. The millions of small businesses and restaurants going bankrupt. 2/3 of US restaurant workers have lost their jobs.
There is a cognitive dissonance. Constant hysteria about the threat. Comparatively little on the grim human consequences.  We aren't supposed to realize that we're the target. Incalculable worldwide suffering and degradation are the real purpose. 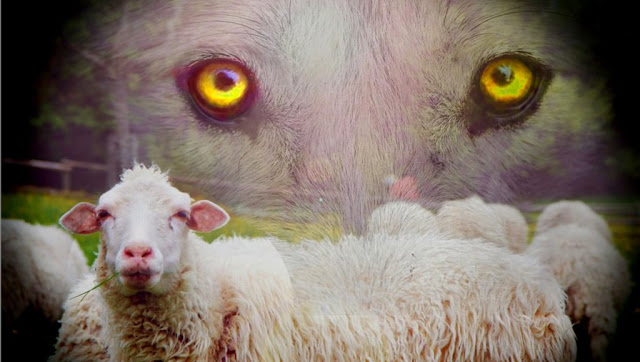 "The goyim are a flock of sheep, and we are their wolves.  ...And you know what happens when the wolves get hold of the flock."   (Protocols of Zion 8)
We find it difficult to understand that we're hated for no reason, that the Cabalist bankers
want to destroy us.
Sheep in the abattoir stockyard probably feel the same way.
We pray for an end to this nightmare, and that this is not just the beginning.
-----------
Related -   "Together At Home" was an infomercial for the Illuminati agenda. It celebrates a "COVID culture". Indeed, we've seen media doing its best to normalize a world where confinement, isolation, and video conferencing were the new norm.
-----------------Gullible Canadians Commit Hari Kari Over Common Cold- 80% of small Businesses are shut
----------- Taiwan- No lockdown, No Covid 19 Flu
------
First Comment from Linde:
I think the CoVid-19 lockdown and social/economic collapse dictated by the ZOGs (both East and West)  is a milestone in the service  of the Dystopia that has already been pioneered on the Soviet - Israel axis of the Communist Revolution.  Think gulags and especially the open air gulag of Palestine which is observable to the West.  Permanent lockdown.  Checkpoints.  Control of all resources.
For the US and other Western nations, Agenda 21 wildlands and sustainable development project maps out the gulag / lockdown project for us.
Maurice Strong - showcase world orderly ( Secretary General of the UN Earth Summit and Club of Rome tanker) spoke at  the Rio Earth summit which produced Agenda 21.  He  stated in 1992.
"It is clear that current lifestyle and consumption patterns of the affluent middle class [ perennial class enemies of the Revolution ] involving high meat intake , consumption of large amounts of frozen convenience foods, use of fossil fuels, ownership of motor vehicles, small electrical appliances, home and at work air conditioning and suburban housing, ownership of property are not sustainable" [ Read 'acceptable' and 'controllable' in terms of good old , proletarian flat iron sovietization where everyone is ground down to the same equalist level.  ]
Can hardly wait for my daily bug burger and nettle tea.
To the developing nations of the world, forget about a Western type of social progress and development in terms of building your national economy with skills, businesses, services and markets and acquiring freedoms that only this type of progress can give.   Mother Earth can't handle it.
Agenda 21 helpfully maps out the dystopia for CoVid-19 spreaders, presumptive cases, infected human resources with ideas about civil liberties, freedom in health choice and  movement,  inessential businesses, services and assemblies (like small, independent businesses), Kulaks, and churches.
Do you have a small independent business that is making 5G resistant paint?  Forget it - the government has shut you down permanently.   Are you a Kulak with an organic restaurant on your small organic farm that is positively fanatical about environmental guidelines?  Your water and irrigation rights have been sold to China.
https://thedailycoin.org/2016/01/06/these-maps-show-us-where-we-wont-be-able-to-live-after-the-takeover-of-america-is-completed-human-access-denied/
In Russia - 5 years jail for a soviet CoVid that is not on point with the government dicta in their social media.
https://www.themoscowtimes.com/2020/04/23/russia-bans-discussions-of-fake-coronavirus-news-a70083
Palestine, Tula, Chernobyl, Zimbabwe  here we come.

Comments for "#Scamdemic - Are We Headed for Recovery or Dystopia? "

You mean that trump and his Chabad buddies wont "save" the world ( after a great and useful culling) from the "Deep state satanists and other undesirables" , institute the noahide laws for a "better" world.which they will run with an iron fist of course?

does not any true victory require sacrifice? What would such a sacrifice look like? the 75/90 formula?

Great article & the explanation is 100 % correct , but as you pointed out ,the populace ( majority ) is like a deer in the Headlights !!The 9-11 was test to see how much the society can take & apply the psychological war fare was intensified – the result we see on hands !!! America is so divided & dumb down so no real turn around is expected sorry to say !!

Thanks for writing this , but may be too late--

They were real trickey in the way they gradually put the American public under illegal "house confinement".

First they banned live concerts and sporting events. Then they went down to gatherings no larger than 500. Then it went to 50 and then 10 over a period of a couple weeks or so.

After the public went along with all these demands the final one that devastated the US and World Economy was the Anti Social Distancing rule of 6 feet.

The American economy and it's people WILL NEVER TOTALLY RECOVER AS LONG AS THE 6 FOOT RULE IS IN PLACE.

That one there was the killer. That rule put more businesses and people out of work in all the history of America. All these people would now be isolated from one another. And, again the public went along with that one too.

The final order was "house confinement" and why not? If the public was gullible to go along with all the other decrees they most certainly wouldn't take a stand against this one either.

We took God out of the equation when we put our trust in our leaders and doctors instead and we're now reaping the whirlwind for doing so.

There are a lot of people partly in the "know" on this thing that find others to blame for the continued captivity of us all. But how many are doing what needs to be done, as I try doing with anyone I meet? That is, telling them that this whole thing is bullshit to enslave them, so throw away the stupid mask, get mad, and refuse this mockery of proper authority.

Believe me, nothing else is going to work. Only enough people mad enough to put their families' lives before the satanic demons who are determined to murder them. But this will not happen with the mass of people doing nothing in their lives as sacrifices for True God. Who is the God who sent His Son here to instruct people on how to use His horrible death as their opportunity to save their souls, ALL OTHERS WORK FOR THE DEVIL, ONE WAY OR ANOTHER.

In China they have moved the payment system to the realm of facial recognition--just show your face and "money" is automatically deducted from your account. Just a few years ago you could see people--often very nondescript people--depositing great wads of bills at the banks. Now everyone, even the impoverished, make and accept payment on cell phones, and cash is hardly recognized. They are miles ahead of us in this area now, but we will soon be following suit. The potential for continuous surveillance of individual actions is approaching perfection.

There are many around us in society who fully expect the government to fully take care of every need. These are people who will never start their own business nor will they ever stop regarding those who do as upstarts. They have no understanding of the leadership and maturity needed to start a business or to drive it forward. They want cradle to the grave care and a world that is virus free. They believe everything the government tells them and regard anyone who distrusts as unpatriotic.

Once again feminism has succeeded. The only way to resist all this is to have strong male leadership. Think Hutterite colony where women are not allowed to do men's work. Those colonies will have total security during these times. They will never worry for food or security.