Khashoggi's Murder - Why the Fuss? 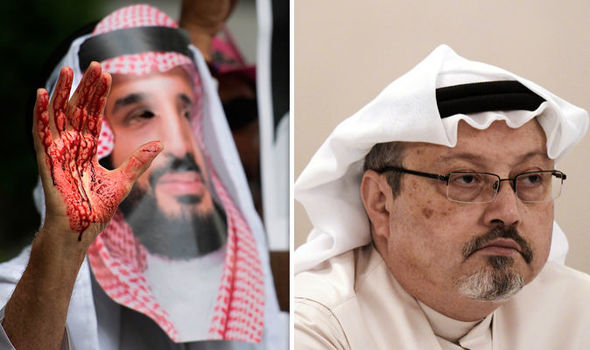 These globalists have fabricated a bogus "war on terror" to crush the remaining vestiges of nationalism and democracy in both Muslim countries and the West. Expect more incitements like the current "Miss World " imbroglio to convince both sides the other endangers its way of life.

In a comprehensive online report, the perceptive Hawaii-based researcher Peter Goodgame concludes: "Osama bin Laden is not, nor has he ever been, the leader of the international Islamist movement which is directed by the International Muslim Brotherhood."

Goodgame continues: "Osama bin Laden has been used effectively as a figurehead for the Brotherhood's militant branch to take responsibility for its atrocities, but he is not the mastermind... By the same token, the Muslim Brotherhood is a tool by the British-based Globalists whose main objective is to overthrow the established world order and create a new one-world system of global governance."

The Muslim Brotherhood has been used to check nationalist movements led by such figures as Nasser, Bhutto and the Shah of Iran who tried to develop their countries. Without the British, "radical Islam would have remained the illegitimate, repressive minority movement that it has always been, and the Middle East would have remained stable and prosperous," Goodgame says.

The Muslim Brotherhood is now a powerful faction in the global oligarchy. Goodgame cites Robert Dreyfuss, author of "Hostage to Khomeini" (1980):

"The real Muslim Brothers are ... the secretive bankers and financiers who stand behind the curtain, the members of the old Arab, Turkish, or Persian families whose genealogy places them in the oligarchic elite, with smooth business and intelligence associations to the European black nobility and, especially, to the British oligarchy.

And the Muslim Brotherhood is money. Together, the Brotherhood probably controls several tens of billions of dollars in immediate liquid assets, and controls billions more in ...everything from oil trade and banking to drug-running, illegal arms merchandising, and gold and diamond smuggling. By allying with the Muslim Brotherhood, the Anglo-Americans are not merely buying into a terrorists-for-hire racket; they are partners in a powerful and worldwide financial empire..."

By fabricating a bogus war between Islamic fundamentalism and the West, the globalists are able to attack their real enemy, humanity. Pulling the strings, they will ensure that both Western and Muslim states are degraded and finally completely subjugated to their odious rule.

The globalists have long been using wars to subvert, demoralize and destroy Western civilization. They backed the Nazis and the Soviets in World War Two. They created the Punch and Judy show that was the Cold War. They tied U.S. hands while backing Ho Chi Minh in Vietnam.

Who are they? Also called the illuminati, they represent a recrudescence of the alliance of Rothschild finance and European aristocracy secretly coordinated by a Satanic dogma hidden in freemasonry.

They plan a new feudalism that will impoverish the middle classes, depopulate and enslave the masses, and leave only the rich served by a technocracy. The whole world will resemble a repressive third world country governed by the IMF, UN and World Bank.

The globalists are headquartered in London and centered on the Rothschild-dominated Bank of England, MI-6 and the secretive Round Table society, which spawned the Royal Institute of International Affairs. The American branches include the Council on Foreign Relations, CIA and the Rockefeller foundations which all ensure the American people continue to finance and enforce one-world tyranny. The Bush family has owed its prominence to this cabal ever since grandfather Prescott Bush helped arrange financing for Nazism.

Zionism is supposed to represent the "West" in this sham war with Islam. Americans are being groomed to become like Israelis, victims of daily acts of "Muslim terror." Last week, when another suicide bomber struck in Jerusalem, Benjamin Netanyahu said, "Whether the explosion takes place in Bali, Moscow, New York or Jerusalem we are all united in a war against a common terrorist enemy."

According to Swiss journalist Richard Labeviere ("Dollars for Terror: The United States and Islam" 2000) radical Islam is an essential "complementary enemy" to Zionism, which also seeks regional hegemony. According to the "Yinon Memorandum" (1982), Israel intends to splinter the Arab countries into several small cantons along ethnic lines. None of these will be able to challenge Israel, which, like the US is a disposable implement of the globalist agenda. (207)

The Palestinian terrorist "Hamas" movement is a product of the Muslim Brotherhood. According to Labeviere, it serves the interests of the Israeli right wing, and has received secret financial support from the Israeli "Shin Beth." (203-205). Thus, Palestinian suicide bombers play straight into Ariel Sharon's hand.

Meanwhile, back in the USA, "Muslim terrorist attacks" are an excuse to lay the foundations of a police state. These attacks, which could become nuclear or biological, might serve as a pretext to declare martial law, suspend elections and round up dissidents, i.e. anyone who is not buying the lie.

This may seem incomprehensible to Americans now when the economy is still being propped up. Once the US has done the globalist's dirty work, interest rates could rise and debt-ridden Americans could be stripped of their assets, as they were in the Depression.

The Homeland Security Act is designed to control all US law enforcement agencies so that elements in the CIA and Mossad can target Americans with impunity, as they did on Sept. 11. American agencies were designed to remain independent so they could serve as a check on each other.

The Act is also designed to allow George W. to place his henchmen in positions of control. Remember, he is a product of a secret Satanic cult, the "Skull and Bones." This sounds gruesome but the Twentieth Century provided many precedents. The Illuminati was behind both Nazi and Communist mass slaughter and terror. Our position is akin to the European Jews who disbelieved warnings of the Holocaust.

There is even a provision in the Homeland Security Act against whistleblowers. Why? Another provision allows mandatory vaccinations while giving vaccine manufacturers immunity from prosecution. Why? The "Total Information Awareness" program will "red flag" troublemakers by monitoring all personal communications and financial transactions, even your library records. You didn't attack the WTC. Why are you targeted?

What is the justification for this destruction of freedom, which Bush supposedly protects? In 14 months since Sept.11, 2001, there has been not one Muslim terrorist attack in the US despite the bloody American invasion of Afghanistan. If "Al Queda" were capable of pulling off Sept. 11, don't you think it would have planned an encore? Don't get me wrong: I am grateful to the Mossad and CIA for sparing us. But Americans simply don't deserve freedom if they accept this obvious ruse and its ominous consequences.

In conclusion, mankind is in the clutches of a diabolical multi generational conspiracy. A Satanic, criminal cartel has subverted all social institutions and is slowly crafting a brutal global dictatorship. Our political and cultural leaders are witting and unwitting pawns. They are fabricating a phony war between Islam and the West in order to accomplish the degradation of both.

I realize this vision seems incredibly bleak. The mass media holds us in a powerful illusion of normalcy. However, expecting the worst means you will never be disappointed. If you are wrong, you are relieved. If you are right, you are prepared.

Comments for "Khashoggi's Murder - Why the Fuss?"

The regional and religious rivalry between Saudi Wahhabism and the Muslim Brotherhood has ebbed, flowed and reverberated over the years across the Middle East.

Saudis had for long the upper hand especially after several failed attempts by the Brotherhood to take control of Egypt during the Abdul Nasser and Mubarak days.

The struggle in the last two decades, though, has taken an increasingly accentuated form with the ascent of Qatari influence in the region followed by the meteoric rise of Erdoganism in Turkey - that is two complementary offshoots of the Brotherhood.

These two conflicting brands of Islam are most certainly supported and financed by the globalists and have been employed time and again to curb the development of the people of the region, start wars and foster radical ideas and militant "terrosism" within and without the Middle East.

The Khashoggi case is apparently another round of this ongoing battle. Again, the masters of the game will fully exploit the situation to further advance their interests in the region, chief among them continued easy access to oil, more lucrative arms deals and additional security guarantees for Isreal. The latter happens to be either implicitly or explicitly allied with these two versions of Islam. This unholy alliance alone pretty much says it all.

Erdogan has for a long time been the ally and sponsor of the Muslim Brotherhood. The Muslim Brotherhood was temporarily in power in Egypt after Morsi was elected by Egyptians, but the Brotherhood was set back when Morsi was removed from power by Egypt's al-Sisi, who had a Moroccan Jewish mother from a family connected to ben Gurion's Israeli government. Al-Sisi was an apparent Mossad plant in the Egyptian high command, and now Egypt's ruler:
http://www.veteranstoday.com/2013/09/16/al-sisi-jew/

The brutal Wahhabi Saudi rulers, disliked by many common Arabs, are now being pushed into contempt by the Muslim Brotherhood populist Erdogan, ready to take the mantle of Sunni Arab leadership for himself and the Brotherhood. The Khashoggi killing may have been allowed and fostered, specifically to enable the Muslim Brotherhood come-back in the Levant as the leading political vehicle amongst Sunnis.

lot has changed since this article was written 16 years ago.
After 8 years of the Soros/Obama era the "War on Terror" was changed to the "War on the Nation States". Open borders and de-nationalization was now the priority.
Regardless of how hard the globalists try to dissolve the nation states it won't work. The nations are mentioned in scripture and there is no prophesy written that I can recall that has them being dissolved into one super state. If it has not been written means it WILL NOT HAPPEN.
As far as the Washington Post reporter's disappearance goes the storyline is changing everyday which only shows the strong possibility of a hoax.
However, all is not lost. The Saudi Economic Conference that was to take place a week after this story broke was successfully sabotaged by this media blitz that is full of fury but lacking evidence.