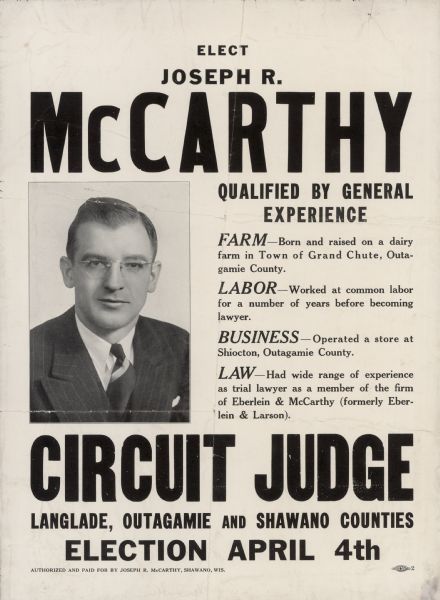 Communists continue to malign their arch enemy.
by Henry Makow Ph.D.
If the late Sen. Joseph McCarthy had been wrong about Communist infiltration in the 1950's, wouldn't he have been refuted and forgotten? Instead, 50 years later, media connected to Khazar (Jewish) bankers and their allies continue to vilify him, indicating that he struck a nerve.

Last week, new transcripts provoked a gratuitous attack in The Washington Post. A Reuters story said McCarthy's "scorched earth investigation into supposed communist infiltration of America's most sensitive institutions...add another layer of tarnish to his place in history."

"The 5,000 pages from his closed-door hearings show no smoking guns, no uncovered spies, no verification of conspiracy theories on which he built his political career...But his probes ruined lives and careers with unproven hints of communist taint."

How do Reuters and NBC reconcile their propaganda with the fact that McCarthy has been vindicated by history? Books like "The Soviet World of American Communism" based on newly opened Kremlin archives confirm that Moscow controlled the US Communist Party and subverted thousands of top-level Americans, including a disproportionate number of Jews.

McCarthy did not understand the true nature and dimension of the subversion. He didn't realize that Communism was a hoax, funded by Khazar bankers and their non-Jewish allies like the Rockefellers, as part of their plan for world domination. According to Prof. Carroll Quigley, "the substantive financial powers of the world were in the hands of these investment bankers...who remained largely behind the scenes..." (Tragedy and Hope, 327). They controlled every President since Woodrow Wilson, and probably masterminded the JFK assassination and 9-11 using the CIA and Mossad. See Victor Thorn, The New World Order Exposed, 2003.

News stories like the one cited above convince Americans to reflexively reject "conspiracy theories." But it's the plotters themselves who own these news outlets.

Samuel Levi Josephat, (baptized Julius Reuter) was the son of a rabbi and the son-in-law of a banker. A revolutionary who fled Germany in 1848, he started the Reuters News Service in 1851. His first major client was the Rothschilds. In 1984, Reuters became a public company but control remains with the "Reuters Founders Ltd." http://about.reuters.com/aboutus/overview/independence.asp

Eugene Meyer's family came to the US after the failure of the Communist Paris Commune in 1871. He purchased the Washington Post in 1933. One of his first acts was to fire the editor for refusing to editorially support FDR's recognition of the Soviet Union.

Mayer had worked for international bankers Lezard Freres, and for Bernard Baruch as head of the War Industries Board. In Chuck Morse's words, " this board held almost dictatorial power over American industry during the war and, as head, Meyer placed billions of dollars worth of contracts with friends and associates."

In a book entitled "Iron Curtain Over America" (1951), Lieut. Col. John Beaty, a veteran of US Military Intelligence, suggests that Communism is nothing but a front for Khazar imperial ambitions. (This book is available second-hand at www.abe.com and www.bookfinder.com)

As you will recall, the Khazars were a Turkic-Mongolian people who had an empire in Southern Russia. In 741 AD they converted to Judaism for political reasons, to distinguish themselves from rival Christian and Muslim empires. In 1016 AD the Russians conquered the Khazars but could not assimilate them because of their adherence to the primitive Babylonian Talmud, which creates "a world of its own," characterized by "magic, incantations, miraculous cures and interpretations of dreams." (Graetz's History of the Jews (1893) Vol. II, p.631)

The Judaized Khazars scorned Russian civilization and refused to enter the fold of Christianity. The Romanovs tried unsuccessfully to assimilate or contain them incurring taunts of "anti Semitism."

Many Khazars embraced communism. Beaty writes: "Since the Talmud contained more than 12,000 controls, the regimentation of Marxism was acceptable, provided the Khazar politician, like the Talmudic rabbi exercised the power of dictatorship." (27)

From their outposts in the financial centres of the world, the Khazars financed the 1917 Bolshevik Revolution. "Israel, in Russia, suddenly found itself lifted out of its oppression," one Jewish historian wrote. In 1918, 457 out of 556 Communist Commissars were Jewish. Trotsky was Jewish. Lenin's grandfather and Stalin's wife were also Jewish. Anti Semitism was made punishable by death. http://www.hoffman-info.com/communist.html

Turning history on its head, Beaty traces the Second World War partly to Nazi resistance to the Khazar /Communist threat. While only 1% of the population, Jews had a major position in German culture, politics and economy. When Hitler began to "Aryanize" in 1933, the World Jewish Economic Federation declared a "holy war" against Germany and initiated an "economic boycott." Yielding to the clamor, "to which the propaganda-dazed public became gradually accustomed," the US government placed prohibitive tariffs on German imports. (Beaty 63)

Like the Communists, the Nazis also had a diabolical plan for world domination. Beaty's book is a reminder that history is written by the victors.

A statement by Jewish-born British Prime Minister Benjamin Disraeli raises the dimension of race in history.

"No man will treat with indifference the principle of race. It is the key to history, and why history is often so confused is that it was written by men who are ignorant of this principle and all of the knowledge that it involves... Language and religion do not make a race--there is one thing that makes a race, and that is blood." (Endymion, pp. 249-50)

Beaty suggests that the new world order is a veiled scheme for Jewish racial supremacy. Jews have certainly played a dominant role in revolutionary movements like communism, liberalism, Zionism, neo-conservatism, feminism and modernism. But I don't think a Jewish racial agenda is the explanation. The same gang sacrificed millions of Jews in World War II. Competing elites wouldn't tolerate Jewish domination. Rather, I think the new world order is based on the desire of the superrich, Jewish and non-Jewish, to protect and increase their wealth using a command economy and an authoritarian political system. Everyone else is a pawn is this game.

Jews need to stop being manipulated by Jewish powerbrokers. From an early age Jewish children are taught that Jews were unjustly persecuted throughout history. They become Communists, Liberals and Zionists hoping to create a better world. But these movements have resulted in brutal persecution of other people by Jews. Communists killed millions of Christians, Kulaks and Germans. Liberals have hushed this up.

As we have seen, Americans (like Jews) are kept in a mental straitjacket. Joseph McCarthy (and his predecessor Martin Dies) are true American heroes yet they are demonized. Chuck Morse sent me this statement, which gives Sen. Joseph McCarthy his due. It is from Arthur Herman's Joseph McCarthy: Re examining the Life and Legacy of America's Most Hated Senator (2000).

Joe McCarthy's great achievement was that he helped popularize a deep public animosity toward Communism and its agents. McCarthy attacked liberalism itself, exposing its fraud by proving the liberal's willingness to side with Communist infiltration and treason, to glamorize the brutality of Communist governments... Liberalism and Communism are both infected with the same materialistic secular virus...Their identical world-view creates a "strong affinity between the Communists and New Dealers; between the progressive and totalitarian visions of the maximalist state."