KEVIN MACDONALD'S THE CULTURE OF CRITIQUE

Jewish values and attitudes now constitute the culture of the West.

Because of deep-seated Jewish hostility toward traditional Western

(i.e. Christian) culture, the founding peoples "have been made to feel

deeply ashamed of their own history, surely the prelude to their demise

as a culture and a people."

or even care that Judaism is Satanism; and as far as I know, he never mentions Freemasonry.

Kevin MacDonald book "The Culture of Critique" (2002) portrays the 20th century as a Jewish century.

A hundred years ago, Jews were an impoverished people living mostly in Eastern Europe surrounded by hostile populations. Today Israel is firmly established in the Middle East and Jews have become the wealthiest and most powerful elite in the United States and other Western countries.

More significantly, according to MacDonald, the Western intellectual world has become Judaized. Jewish values and attitudes now constitute the culture of the West. Because of deep-seated Jewish hostility toward traditional Western (i.e. Christian) culture, the founding peoples "have been made to feel deeply ashamed of their own history, surely the prelude to their demise as a culture and a people." (lxix)

Specifically, Jewish organizations promote policies and ideologies aimed at undermining cultural cohesion while practising the opposite policies themselves. While they promote multiculturalism and internationalism in the West, they insist that Israel remain a racially pure national enclave for Jews.

"The present immigration policy essentially places the United States and other Western societies "in play" in an evolutionary sense which does not apply to other nations of the world," MacDonald writes. "Notice that American Jews have no interest in proposing that immigration to Israel should be similarly multiethnic, or ... threaten the hegemony of the Jews." (323)

THE PARTY OF NATIONAL DECOMPOSITION

MacDonald says anti Semitism in Weimar Germany was based on a perception that "that Jewish critical analysis of gentile society was aimed at dissolving the bonds of cohesiveness within the society." One academic referred to the Jews as "the classic party of national decomposition." (163) 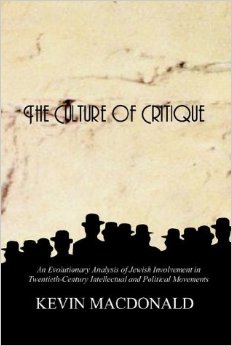 MacDonald speculates that Jews feel more comfortable in societies without a distinctive national character. I think there is more to this. The break-up of society into isolated individuals is also the agenda of the new world order, which wishes to remove any united resistance. The new world order is essentially the transfer of all power to international finance. The question then arises: is the new world order a Jewish phenomenon? Or are Jewish intellectuals the pawns of financiers, both Jewish and non-Jewish?

MacDonald focuses on how Jewish intellectual movements led by authoritarian figures took over modern intellectual life. He discusses Boas in Anthropology, Adorno in Sociology, Freud in Psychiatry and Derrida in Philosophy.

Social disintegration leads to psychological confusion. Society has accepted Adorno's view that there is no objective standard of truth, no common reality. Everyone is isolated and different. Adorno resisted attempts to "endow the world with any universality, objectivity or totality, with any single organizing principle that would homogenize society..." (164)

This kind of post-modernist philosophy has paralyzed modern Western culture. Western civilization is built on the foundation that truth is spiritual, universal and knowable. Ultimately truth is God. (Judaism is not a religion because its God is tribal, not universal. The goal of Judaism is to supplant God. This is the essence of the New World Order.)

Universities today have given up the pursuit of truth and are devoted to Bolshevik-like social engineering and indoctrination. A liberal arts education today is not only a waste of time but toxic. Far from bearers of the Western tradition, universities are its executioners with the tacit blessing of the government.

Kevin MacDonald, a professor of Psychology at California State University is a rare exception. His courageous indispensable book unveils the subversive character of our time.

A soft-spoken man who approaches his subject with scientific detachment, MacDonald has amassed a wealth of remarkable detail. For instance, did you know that white gentiles are the most underrepresented group at Harvard? They account for approximately 25% of the student body. While Asians and Jews make up only 5% of the US population, they account for at least 50% of Harvard enrolment.

"The United States is well on the road to being dominated by an Asian technocratic elite and a Jewish business, professional and media elite," MacDonald says.

He details the Jewish role in sponsoring Communism, non-European immigration and the NAACP. He documents the stranglehold Jews have on US cultural life and shows how it is used to shape American attitudes. 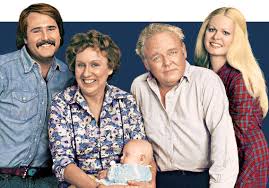 "For example, All in the Family ...not only managed to portray working class Europeans as stupid and bigoted, it portrayed Jewish themes very positively. By the end of its 12-year run, even archenemy Archie Bunker has raised a Jewish child in his home, befriended a Black Jew (implication: Judaism has no ethnic connotations), gone into business with a Jewish partner, enrolled as a member of a synagogue, praised his close friend at Jewish funeral [etc].... Jewish rituals are portrayed as "pleasant and ennobling" ... There is never any rational explanation for anti Semitism...[it] is portrayed as an absolute irrational evil that must be fought at every turn." (lviii)

On the other hand, Christianity is typically portrayed as evil in the movies, and Christians are even depicted as psychopaths. MacDonald cites conservative Jewish critic Michael Medved who complains that he couldn't find one film made since 1975 where Christianity was portrayed positively. (lix)

MacDonald sees anti Semitism as the result of legitimate conflicts-of-interest. Yet Jewish organizations demonize anyone with the temerity to address Jewish power. They suppress the fact that Jewish-Christian rivalry has very deep roots in Western society.

In my view, this rivalry boils down to the fact that Jewish Pharisees rejected Christ's gospel of universal love and human brotherhood. Ever since, Jews have been social and metaphysical outcasts, albeit ones with amazing powers of self-justification. We have been used as pawns by worldly powerbrokers bent on destroying Christian civilization. The "modernist" trend of the 20th Century can be seen in these terms.

A beacon for humanity, Jews have not been. Deceived ourselves, we have deceived others and purveyed personal dysfunction and societal oppression. The Jewish role in Communism is a disgrace. Israel is a source of shame. Jews need to discover who we really are and rededicate ourselves.

We can begin by reading "The Culture of Critique" and the other books in MacDonald's trilogy about Judaism as an evolutionary strategy, "A People that Shall Dwell Alone" (1994) and "Separation and its Discontents" (1998). MacDonald's publisher sent "The Culture of Critique to 40 Jewish publications and didn't get one review. Nor has there been any mainstream coverage, a confirmation of his thesis and measure of our captivity.

MacDonald does not suggest remedies. But to combat the "new world order," Western nations must return to their Christian and national roots. The founding groups should reassert their values and traditions as the common glue.

At birth we each enter a drama already in progress. We may sense something is very wrong but we can't define it. In fact, we are in the advanced stages of a long-term conspiracy to subvert Western civilization. War, homosexuality and migration are just other facets of this conspiracy. "Modernism" in the 20th Century was a hoax designed to strip people of their familial, cultural and religious identity before enslaving them in a new dark age. Western societies must return to their Christian and national roots or this drama will not end well.

A must-read review of The Culture of Critique. (I am not endorsing this site in general.)

Kevin MacDonald is Editor of the Occidental Review     His website

Re. your caveat about McDonald not mentioning Freemasonry, I've often noticed that evasion among white nats [nationalists] myself. For instance David Duke tells a lot of truth about Jewish tribal supremacism and double standards, but implicit in most of what he says is the idea that everything was hunky dory when the so-called WASPs (itself a deeply misleading acronym) ruled the roost.

Really? So it's all just a coincidence that many of the leading Goy facilitators of the Tribal agenda were "WASP" Freemasons? Churchill. FDR, Truman, LBJ, the Bushes, et al?

Of course the KKK itself was a sub-Masonic organization, so perhaps the white nats' blind spot about Masonry isn't that surprising after all.

Comments for "The Jewish Century"

I started reading "Culture of Critique" some time ago and couldn't finish it. Thanks for reminding me. I'll pick it up again.
What was discouraging to me was the academic dryness of it all. It seemed like he was desperately trying not to appear to be a David Duke type white nationalist yelling, "kill the kikes!" or, "heil Hitler!" No, this is a scientific thesis, but the thing is, I get it. I've had Jewish family in academia, publishing, law, medicine, etc... liberal goyim parents who are Judeo dupes of the highest (or lowest) order, so what did I expect him to explain to me that I didn't already know?

There are those that say the Freemasons enabled the Jews, that the Vatican gave them their power, and there are some who bold enough to say that maybe, just maybe, the Jews did it. Well, there's the answer.
Thanks for letting me type that out.

The best thing I remember from The Culture of Critique, which I shall have to read again one day, is that the Jews for millennia have effected a "group evolutionary strategy". One could simply call it parasitism and subversion and exploitation. That definition avoids the Jewish identity shell game of is it a race or religion or whatever.

Regardless of our differences in this informational minefield us pundits, students, researchers, bible followers can agree with one thing, there is a Jewish problem, and that includes all of us to some extent as products of this system.

Demosthenes tried to get together with the dreaded Spartans to defend ancient Greece against the new invaders, Philip II of Macedon, Alexander the Great's daddy, and according to Leuren Moret, of the bloodlines of the 'Illuminati'. Lessons there perhaps in cooperation of disparate entities rather than a utopian blast to a mythic homogeneous past.

btw at this stage in my understanding, I'm all with Jesus but I could also handle it if it was all cooked up (ala Joseph Atwill's book Ceasar's Messiah..) as it changes nothing of the what he stood for, showing us the way, and what Jesus also stood against. I'd also have sympathy for the poor misunderstood Jews in rejecting that particular Messiah, if only they shed 1% of the light that his story shed for us. Light, Love and Truth that is.

I couldn't help blush at the unintended irony that your intro to McDonald's 'Culture of Critique' today is a critique, not just an introduction.

The premise of 'Culture of Critique' is that a toxic element of Jewish group survival strategy tends to weaken the 'host' culture and enemy alike. From this socio-cultural perspective, individual Jews aren't necessarily aware of disrupting things that are normal and beneficial for the survival of the host. In other words, Jews can't help it.

Cults and rituals created by an ethnic group are secondary or tertiary to the premise of Culture of Critique. From your perspective, religion and secret societies (Satanism and Freemasonry) are fundamental. That's to say, you have your perspective, and McDonald has his.
--

Thanks for your feedback Dan

but on his website I think MacDonald is less forgiving