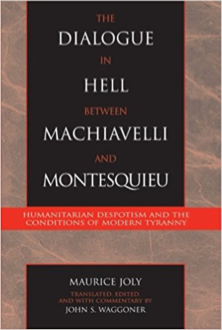 Jewish apologists claim that the Protocols of Zion

were a direct plagiarism of this book published in 1864.

However, this universally-accepted claim

does not withstand scrutiny.

Next to the Bible The Protocols of the Elders of Zion is perhaps the mostly widely read book in the world.

Published in Russia in 1903, it purports to be the leaked master plan for "Jewish world domination." It is the kind of thing that would be studied at secret workshops of an occult society.

In different ways, both Zionists and Nazis have made it synonymous with virulent anti Semitism and genocide.

But surely Jews should not be blamed for the machinations of a tiny secret society. The vast majority of Jews would disavow this master plan if they believed it existed.

Surely one can condemn all racism and genocide in the strongest possible terms and still believe the Protocols are authentic.

In my opinion, the equation with anti Semitism is really a ploy to divert attention away from this master plan.

The plagiarism claim is part of a propaganda campaign waged by conscious and unconscious collaborators in academia and the media.

We are told that The Protocols of Zion is a hoax, a "proven forgery" concocted by the Tsarist Political Police (the Okhrana) to incite anti Semitism and discredit revolutionaries.

But the "proof" is far from convincing.

It consists of three articles published in The London Times (August 16-18, 1921) by Philip Graves. 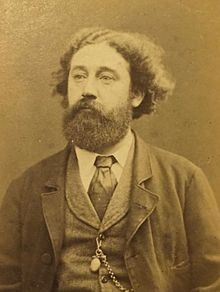 According to Graves, Protocols is a crude, chapter-by-chapter plagiarism of Maurice Joly's Dialogue in Hell Between Machiavelli and Montesquieu (1864).

It was easy to make this claim while Joly's book was unavailable. Napoleon III's police confiscated it as soon as it was published.

But it is available now and I invite you to compare the two texts. In my opinion, they are entirely different in tone, content and purpose. At 140 pages, Dialogues is twice as long as Protocols. Most of it finds no echo in the Protocols.

The crux of Graves' argument is that certain references and passages in Protocols were lifted from Dialogues. He claims there are 50 of these and produces about a dozen.

Their striking resemblance to Protocols leaves little doubt that the author did refer to the Dialogues as part of his research. He had no compunction about borrowing or reshaping a few passages that struck his fancy.

Indeed Philip Graves is "struck by the absence of any effort on the part of the plagiarist to conceal his plagiarisms."

That's because he had nothing to hide.

He was not Graves' "unimportant precis-writer employed by the court or by the Okhrana" to construct a hoax.

He was a diabolical genius crafting an original work. It is simplistic and disingenuous to characterize Protocols as a hoax.

Graves' article smacks of a Zionist propaganda operation. Graves "expose" of Protocols appeared in August 1921 when Zionists were pressing the League of Nations to turn Palestine into a Jewish homeland under British Mandate.

Philip Graves tells the unlikely story that a "Mr. X" brought the Dialogues to him in Constantinople where he was the Times' correspondent. Mr. X presented it as "irrefutable proof" that the Protocols are a plagiarism.

Mr. X was a White Russian, which seems incredible given the Jewish role in the Bolshevik Revolution. He claims he bought the book from, get this, "a former member of the Okhrana" who had fled to Constantinople.

In The Controversy of Zion, (Chapter 34) Douglas Reed, a Times' staffer at the time, provides additional background.

In May 1920, Lord Northcliffe, a part owner of The Times, printed an article about the Protocols entitled "The Jewish Peril, A Disturbing Pamphlet, A Call for an Enquiry. " It concluded:

"An impartial investigation of these would-be documents and their history is most desirable...are we to dismiss the whole matter without inquiry and to let the influence of such a book as this work unchecked?"

Then in May 1922 Northcliffe visited Palestine and wrote that Britain had been too hasty to promise it to the Jewish people when in fact it belonged to 700,000 Muslim Arab residents.

Mr. Wickham Steed, the editor of The Times of London in 1921 refused to print the article and Northcliffe tried to get him fired.

Somehow Steed was able to have Northcliffe declared "insane" and committed. Later Northcliffe complained he was being poisoned and died suddenly in 1922.

Douglas Reed was Northcliffe's secretary but didn't learn of these events until they appeared in the Official History of the Times in the 1950's.

Clearly Northcliffe had offended some "big boys" when he opposed the British Mandate in Palestine. Why was it so important? 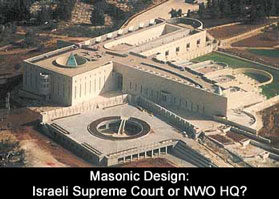 Israel is intended to be the capital of the Masonic World Government. They are already constructing the infrastructure. See "The Roots of Evil in Jerusalem."

THE FORGERY CLAIM IN MORE DETAIL

Philip Graves and the other apologists are incorrect to claim the Protocols plagiarize the Dialogues chapter by chapter.

Graves writes that "the Seventh Dialogue...corresponds with the fifth, sixth, seventh and part of the eighth Protocol. "

At eight pages, these Protocols are twice as long as the Seventh Dialogue.

They mostly contain material not in the Seventh Dialogue, or anywhere else. I will list a few examples from Protocol Five alone.

Protocol Five says "our kingdom will be distinguished by a despotism of such magnificent proportions" that it will "wipe out any goyim who oppose us by deed or word."

In contrast Seventh Dialogue says, "Death, expropriation and torture should only play a minor role in the internal politics of modern states."

Protocols Five says we "robbed [the goyim] of their faith in God" and "insinuated into their minds the conception of their own rights" thereby undermining the authority of Kings. There is nothing comparable in Dialogue Seven.

Protocol Five says, "we shall so wear down the goyim that they will be compelled to offer us international power [allowing us] gradually to absorb all State forces of the world and to form a Super-Government." There is nothing comparable in Dialogue Seven.

Protocol Five says the "engine" of all states is "in our hands" and that engine is "Gold." "We were chosen by God Himself to rule over the whole earth." There is nothing comparable in Dialogue Seven.

ON THE OTHER HAND

The author of Protocols does select a few passages or references from Dialogues that appear unaltered (see Graves) or in different form.

For example, the Dialogues' say: " Everywhere might precedes right. Political liberty is merely a relative idea. The need to live is what dominates states as it does individuals."

In Protocols this becomes, "From the law of nature right lies in might. Political freedom is an idea but not a fact, and one must know how to use it [political freedom] as a bait whenever it appears necessary to attract the masses ... to one's party for the purpose of crushing another who is in authority." (Protocols 1)

Graves leaves out the last part to make the resemblance seem greater than it is.

Dialogues (7) say, "Revolutionary ferment which is suppressed in one's own country should be incited throughout Europe."

In Protocols (7) "Throughout all Europe ... we must create ferments, discords, hostilities." There is no reference to suppressing these in one's own country.

The author of Protocols is not a forger creating a hoax, but a conspirator forging an original work.

Both books belong to the "immoral school" of political theory. Machiavelli pays homage to a long list of rulers "who are progenitors of my doctrine." Both preach might makes right, "good" comes from evil, and the end justifies the means.

But the similarity ends there. The tone of the Dialogues is dry and theoretical. It is a debate between fictional political theorists: Montesquieu, a champion of democracy and Machiavelli, a champion of tyranny. Dialogues is considered a critique of the reign of Napoleon III.

Montesquieu asks how to quell the spirit of anarchy in society. Machiavelli prescribes a "monster called the state" which maintains a democratic artifice but is actually controlled by the "Prince." He talks about how to suppress secret societies.

On the other hand, the tone of Protocols is frankly conspiratorial and subversive and pays homage to Lucifer. Protocols is a "strategic plan from which we cannot deviate without running the risk of seeing the labour of many centuries come to naught." (Protocol 1)

We are struck by a sense of relevance when reading Protocols. We immediately recognize its baneful influence in today's world. Here is a synopsis. See also  "Did Rothschild Write The Protocols of Zion?" "Protocols is the NWO Blueprint" and "Protocols Dominates Our Culture" .

Since Graves' articles, there have been a few books arguing the "forgery" thesis. The latest is Norman Cohn, Warrant for Genocide (1970).

Graves and Cohn admit that "the Financial Programme" (Protocols 20-24) which the author calls "the crowning and decisive point of our plans" is largely original.

Goebbels said that propaganda is effective only when the reader doesn't realize it is propaganda. It follows that dupes write the best propaganda.

One hundred million people were slaughtered in the last century but no one considers the possibility that the human race might have been subverted.

War is hell but no one thinks Satan worshipers might be behind it.

I suspect the Second World War was a battle for racial superiority between Jewish and Aryan wings of the Illuminati who in fact are united at the top.

The private central bankers of England, the U.S. and Nazi Germany made the war possible. They worked as one at the Bank of International Settlements in Switzerland. (See Charles Higham, Trading With the Enemy.)

The purpose of the war was to degrade, defraud and demoralize humanity. The Holocaust provided a rationale for the establishment of Israel as headquarters of the New World Order. Aryans, Jews and many others were sacrificed and exploited.

In my opinion, the outlawing of Protocols on pain of death in Bolshevik Russia and its execration in the West today proves its authenticity.

Mankind is in the grip of a diabolical conspiracy. In order to make good people do bad things, truth must be tailored to fit the political purpose. This is Communist and feminist teaching.

I would like to be proven wrong, but in the case of Protocols, the "forgery" argument is propaganda.