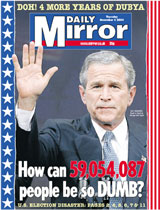 Consternation over John Kerry's defeat diverts us from the real issue: World domination by a subversive occult elite.

Although Bush and Kerry aroused deep antagonism, they were identical on the important issues: Iraq, 9-11 fraud, "terror" hoax, Patriot Act and illegal aliens. Both candidates even opposed gay marriage.

Many people wanted to repudiate Bush for launching a gratuitous obscene and tragic war against Iraq. But Kerry might have been an even worse alternative.

Bush must be doing something right to arouse such enmity in liberal quarters, Hollywood, New York, Canada, the UK and Europe.

According to British commentator Tim Rifat, Bush's victory is a "disaster" for the New World Order and Jacob Rothschild is apoplectic. Bush's imperialist ambitions run counter to the integration of the US into a world government where China, Russia and Europe have priority.

US imperialism will derail the Illuminati's timetable for a Third World War around 2012, says Rifat. Rothschild agent John Kerry would have made a deal with the Iraqis similar to the one the British have in Basra. He would have given Iran, North Korea and China time to prepare for the final conflagration.

On the other hand, Rifat could be wrong. The rift may be for appearance's sake only. The Illuminati could be setting up Bush's U.S. as a pariah state, a la Hitler, in order to foment a series of wars leading to WWIII.

We are brainwashed to see everything in terms of good guys and bad guys. Bush and Kerry represent rival factions of the Illuminati. Neither have our best interests at heart. Their argument, if there is one, is over pecking order.

We are helpless to oppose them as long as we are bitterly divided into conservatives and liberals. Let's step out of the right-left paradigm. The Illuminati controls both sides using the media.

The correct paradigm is Illuminist elite versus humanity.

We are in the advanced stage of a long-term conspiracy against Western civilization. The conspirators have subverted our social institutions, business, government, law, education and the media. They have managed to enlist the support of many people who unthinkingly equate complicity with "success."

The conspirators are dynastic families consisting of Jewish finance (Rothschild) and old British, American and European aristocracy (Rockefeller, Windsor, Cecil) joined by marriage, money, and devotion to Lucifer (Freemasonry.) The top ranks of the Freemasons are the Illuminati. They are based in the City of London.

The Royal Institute of International Affairs and the Council on Foreign Relations coordinate things using their network of foundations, think tanks, business and professional associations and intelligence agencies.

This is the real "establishment" -- monopoly capital. It is neither Left nor Right. It is very big government controlled by very big business. The New World Order is a continuation of the same forces that drove British imperialism.
(See "The Jewish Conspiracy is British Imperialism")

KEEP YOUR EYE ON THE BALL

The Illuminati is dehumanizing us as a means of imposing its tyranny. To do this they must destroy the four pillars of human identity, cohesion and strength.

As I have said, these pillars are Race, Religion, Nation and Family. Anyone who undermines these institutions is an Illuminati pawn. Anyone who genuinely upholds them is on the side of humanity.

Race. The human family is made up of races, none better than another, each with unique qualities to contribute. Have you ever wondered why Europe and North America have to become "multi cultural" while Israel, China and Japan are allowed to retain their racial identity? Obviously the Illuminati have determined that people of European descent do not need national homelands. They constitute the greatest threat to the New World Order and must lose their racial and national cohesion.

Both Bush and Kerry support Illuminati policies by permitting the influx of millions of illegal aliens while hypocritically professing concern about terrorism.

Religion. You don't have to be religious to believe in God. As far as humanity is concerned, God is following spiritual beacons like goodness, justice, truth, and beauty. Man has a divine soul that allows us to perceive these ideals. We simply need to apply them to our daily behavior. That's it.

The proverb "Do Unto Others as You Would have them Do Unto You " is all the guidance we need to govern our conduct.

True religions are concerned with human perfectibility using these ideals as guides. Illuminists (and Satanists) want to reduce mankind to a subhuman state like cattle. Satanism is not a religion. Religion is about manifesting God, not Lucifer.

Bush and Kerry both bring God and religion into disrepute by pretending to be Christians. They are Satanists. They belong to the Skull and Bones chapter of the Illuminati, a satanic secret society. They admit they belong and refuse to speak about it

Nation. People need boundaries: their skin, neighborhood, city and country. They don't want to be "global citizens" where important decisions are made by the Illuminati through their United Nations front. National autonomy is a healthy thing. So is democracy when it's real.

In this case, Kerry is more internationalist than Bush, but Bush is turning the U.S. into an pariah, which also discredits nationhood.

A male friend told me that on his first date with a 28-year-old programmer who makes $50,000, she broke into tears at the thought of not having children. Unconsciously millions of women sense they have been betrayed by femanism.

The Illuminati have brainwashed women to think wife and mother is an oppressive and unworthy occupation as compared to working for the government or corporations i.e. the Illuminati. Women are favored for jobs in order to break up the family, i.e. prevent women from having children and men from becoming providers.

As result, women are squandering their precious years of fertility starting a career instead of a family. They learn skills and attitudes that often make them incompatible to men.

We derive our identity and purpose from our family roles. Women's natural role is to be wives and mothers, to raise the new generation. (I'm not saying all women must do this or that they shouldn't have careers later.)

The Illuminati (like their Communist creation) pretend to champion a minority like Jews, Blacks, women, workers and gays. They don't give a damn about these groups. They use them to subvert the social and moral order and assume power. Our so-called leaders are subverting us.

Gay marriage is another brazen attempt to subvert the family. Yet the liberal media persists in labelling our resistance as "intolerance."

Are homosexuals and heterosexuals identical? Are they? Then why would their marriages be?

Imagine my friends and I had a gay pride parade. Imagine we dressed up in business suits and marched through the streets conducting ourselves in a respectful manner and giving out pamphlets advocating abstinence before marriage and monogamy after. Imagine our signs and floats said "Gay Pride."

We want equality, we would reply. If you can have gay pride parades, why can't we?

But you are not homosexuals and gay pride is a homosexual institution, they would say. You're spreading confusion.

Exactly! Marriage is a heterosexual institution. Gays are welcome to have a separate marital status with equal rights and responsibilities. But they are not welcome to equate homosexual with heterosexual marriage. Equal is not identical.

Gays represent 3% of the population. Those who marry probably represent less than one quarter of one percent. The purpose of this campaign is to undermine heterosexual marriage. Gays activists say as much in private. See "The Other Attack on Our Manhood"

Do majorities have any human rights? Not according to the Illuminati.

Kerry would probably favor gay marriage but could not risk alienating voters. Bush pretends to champion traditional values but the Illuminati likes to control both sides of a battle. Bush has done little to reverse the tidal wave of femanism and homosexual promotion in schools, the military, government and corporations.

The recent election was a demonstration of how "freedom" works. We choose between two candidates screened and selected by the Illuminati. At best, they represent rivalries in the elite. This has been going on for more than a century.

Under the circumstances, it's beside the point to complain when the "lesser evil" doesn't win. That's buying into the lie. It makes more sense to reject the matrix entirely. It is a mental trap.

We need to stop believing what we are told and start using our common sense. Education is a trick designed to prevent us from thinking for ourselves. Let's set aside philosophies, prophesies and religious differences and begin to apply genuine ideals such as truth, justice and love to our lives.

Life on earth is a miracle. Even my dog displays sweetness and gentleness because we care for him. He has a soul. And he's just a dog.

People are capable of so much more. Let's not allow ourselves to be diverted, degraded and destroyed. Let's keep our eye on the real paradigm. Let's uphold God, family, race and nation and bring love and truth into our world.