Protocols Hold Key to Our Exasperation 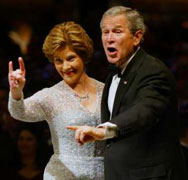 This week we watched in horror as a sanctimonious sociopath President George W. Bush stealthily signalled allegiance to Satan while making obscene promises to bring "freedom" to the world.

This is after complicity in the most heinous attack on American soil in history; the establishment of a police-terror state; the theft of the 2000 and 2004 elections; not to mention the evil and unprovoked invasion of Iraq and the near doubling of the national debt.

Bush is now staking everything on elections in Iraq that can only bring a pro-Iranian Shiite party to power. (One commentator has suggested the US is no longer fighting Israel's war and is now fighting Iran's.) At the same time he is threatening Iran with attack over its nuclear program.

Does this make any sense?

Not unless you see Bush as a straw man whose function is to advance world government by bankrupting the US and destroying American power and prestige. Remember the pantomime that preceded the war? The UN was against the war; the "rogue" U.S. ploughed ahead anyway.

As the only superpower, America represents a major obstacle to world government. Defeat in Iraq, just like Korea and Vietnam earlier, is designed to cut her down to size.

The explanation can be found in a book that we have been trained Pavlov-style to reject. The Protocols of the Elders of Zion is the work of a Jewish Masonic secret society. Caught red-handed, they attempted to confuse the issue of world domination with anti-Semitism. The vast majority of Jews is not aware let alone in favor of this plot for world government by a small "Jewish" financial elite and their Masonic allies.

In the Protocols, the author, who I suspect was Lionel Rothschild, writes that their goal is: "To wear everyone out by dissensions, animosities, feuds, famine, inoculation of diseases, want, until the Gentiles sees no other way of escape except by appeal to our money and our power." (Protocol 10)

"We will so wear out and exhaust the Gentiles by all this that they will be compelled to offer us an international authority, which by its position will enable us to absorb without disturbance all the governmental forces of the world and thus form a super-government." (Protocol 5)

Harold Rosenthal who was a member of this cabal boasts that they even implanted a "guilt complex" over the Holocaust and anti-Semitism that prevents society from addressing the threat.

Through control of banking, they acquired a total monopoly of "the movie industry, the radio networks and the newly developing television media...we took over the publication of all school materials... Even your music! We censor the songs released for publication long before they reach the publishers...we will have complete control of your thinking."

We "have put issue upon issue to the American people. Then we promote both sides of the issue as confusion reigns. With their eyes fixed on the issues, they fail to see who is behind every scene. We Jews toy with the American public as a cat toys with a mouse."

Rosenthal fails to mention Jews themselves are brainwashed first, and then used to brainwash others. In the "Protocols" the writer confesses they encourage anti Semitism. "Anti Semitism is indispensable to us for the management of our lesser brethren." (9-2) Many Jews appear to be unwitting pawns, $ supporters, agents and scapegoats for the secret plans of their meglomaniacal leaders.

When I look, I am distressed to see so many "Jews" behind every scene. According to an article in Israel's Haaretz newspaper, the Iraq war "was conceived by 25 neo conservative intellectuals, most of them Jewish."

Many of the same people (e.g. Richard Perle, Douglas Feith) were members of a Likud party think tank that recommended in 1996 Israel "shape its strategic environment" beginning with the removal of Sadaam Hussein.

The policy of the media, and the Democratic Party, both controlled by this banking cartel, is to give George Bush enough rope to hang himself (and us.) Bush has enjoyed immunity from genuine criticism in the mass media and political arena. They are surprisingly cooperative when it comes to NOT covering election irregularities or suppressing casualty figures. Even Dan Rather was squelched when we all know Bush's national service is suspect. The mass media is responsible for legitimizing the indefensible.

Last week we witnessed the spectacle of Jewish Senators like Barbara Boxer grilling Condeleeza Rice for not having a plausible "exit" strategy from Iraq.

At the same time, other Democrats like John Kerry, Howard Dean and Barack Obama accuse Bush of being soft on Iran and urge a "surgical strike."

Many of the most effective critics of Bush are Jewish. Take the "White House Insider" for example. It's hard to believe he could remain anonymous if he wasn't fulfilling a larger purpose. Or Jon Stewart who skewers Bush daily on the Comedy Network. Or Noam Chomsky who castigates US corporations and never mentions the London-based banking cartel that controls most of them.

At the same time Bush's strongest partisans are also Jewish. Ken Mehlman was Bush's campaign chairman and is now head of the Republican National Committee. The new Homeland Security Czar Michael Chertoff is the son of a rabbi and was a member of Bnai Brith's ADL. (Chertoff is actually tied to the "terrorists.") Paul Bremer's spokesman in Iraq was Dan Senor, a kosher Jew who interned with the Israeli lobby AIPAC and graduated from Hebrew University. Bremer himself worked for Henry Kissinger.

Are these Jews coordinated? At some level I think they are. I suspect many are members of the Bnai Brith. But the majority I suspect perform their role unwittingly. The banking cartel funds everyone. The people who serve their purpose are "fed." They are given jobs and media coverage. The rest are "sandbagged."

Take me for example. I am Jewish. Many racists want to believe that I am paid to shift the blame to the Masons. Start to worry when you see me in the mainstream media or in academia. (If I do have a hidden agenda, it is to prove that all people should be judged as individuals and not prejudged by their race.)Mark Bruzonsky and Judith Reismann are examples of other Jews who are sandbagged.

On the other hand, Philip Roth's latest book The Plot Against America is an excellent example of how International Jews shape the American perception of reality. It portrays a genuine American hero Charles Lindbergh as a traitor, and FDR, a NWO traitor (like Bush) as a hero.

JEWS ON THE FRONT LINES

It troubles me that Jews are on the front lines of the New World Order.

Even here in Canada where same-sex marriage is becoming a heated issue, the Justice Minister Irwin Cotler, a former president of the Canadian Jewish Congress, promotes this law that effectively treats homosexuality and heterosexuality as though they were the same thing. Gay marriage is a classic nwo means of dividing society. (Cottler incidentally bears responsibility for imprisoning Ernst Zundel for thought-crimes. Solitary confinement is torture.)

Most people have an image of the "Jews" as a downtrodden people unjustly persecuted and driven from country to country. This may apply to some but wealthy Jewish merchants, bankers and professionals have always exerted a powerful, perhaps dominant influence on the course of Western History. Werner Sombart goes so far as to credit them with the rise of capitalism and the "American spirit." (The Jews and Modern Capitalism, 1911)

The history of anti-Semitism in the last 300 years is related to opposition to the New World Order. Before he went to work for the "International Jews," Winston Churchill made the distinction between Jews whose first loyalty is to their country ("national Jews") and those whose loyalty is to a super government dominated by a small occult financial elite. He didn't realize that not only Bolsheviks but also Zionists represented the second force.

The majority of Jews like myself have always pledged their loyalty to their country of domicile. The First Zionist Congress in 1896 had to switch location from Munich to Basle because of the angry opposition of Orthodox Jewish rabbis. The American Council for Judaism has promoted an anti Zionist US-first vision for over 60 years. Another group is Jews Against Zionism.

But these people are not "fed." As the spiritual night represented by the New World Order descends on mankind, opposition will continue to be expressed as "anti-Semitism" although most of Western society, Jewish and Gentile alike, is engaged in this suicidal process.

Jews and non-Jews alike must unite and resist being divided and "worn down." We must uphold our national institutions and oppose world government and its policies of national and social disintegration.

"The view one now tends to hear in Washington is that there
can be no victory in Iraq until Iran and Syria are brought to heel...
Douglas Feith, assistant secretary of defense for policy at the
Pentagon, is said to be working closely with Israeli officers in
identifying weapons sites for targeting in Iran, much as he
did in planning the war against Iraq."