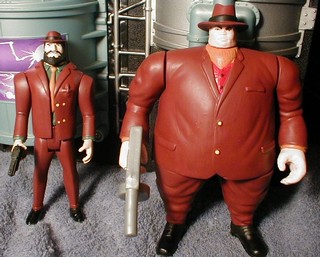 The Jewish elite regards the Jewish rank-and-file as pawns to be manipulated.

"Anti Semitism is indispensable to us for the management of our lesser brethren,"

hat reads like the blueprint of the New World Order.

A "protection racket" is a scam where an aggressor instigates an attack, blames a bogeyman, and then offers to protect the victim from this bogeyman in return for money and power.

The "War on Terror" is a protection racket. The aggressor is the world financial elite known as the "Crown" based in the City of London. Their instrument is the Zionist project, specifically Israel, the Mossad and its Neo Con allies.

The victim is the people of the United States and the West in general. The goal is the overthrow of Western Civilization, and the establishment of a world police state called the "New World Order."

The head of the Department of Homeland Security is Israeli dual citizen and Zionist Michael Chertoff. He was the New Jersey State Attorney when five Mossad agents were arrested after witnesses saw them congratulating themselves on the destruction of the World Trade Center. Their van tested positive for explosives. (See Chris Bollyn article below.) Speculators who shorted airline stocks before 9-11 have been identified as Israelis apparently.

The Jewish elite regards the Jewish rank-and-file as pawns to be manipulated. "Anti Semitism is indispensable to us for the management of our lesser brethren," says the author of Protocols of the Elders of Zion (9-2) a "forgery" that reads like the blueprint of the New World Order.

The pogrom on Sept. 11 2001 was designed to stampede Americans into forfeiting their civil rights and invading the Middle East.

There is a drumbeat in the media to convince Americans that they are victims of Muslim fanatics. This propaganda campaign is carried out by Neo Cons (a.k.a. Zionists.) In his book, "The New Jerusalem: Zionist Power in America," Michael Collins Piper writes:

"In the build-up to the Iraq war, Zionist propagandists and the media increasingly began touting the message to Americans that "the whole world is against us"... and the Israelis are our only real solid dependable ally ...The theme that anti Americanism had run rampant was instilled in Americans for the very purpose of making them "anti" everyone who refused to support the...Iraq war...and the more broad ranging Zionist agenda." (157)

Sound familiar? This is the tactic they use on Jews. See my "How Jews are Brainwashed and Manipulated."

Piper says that Zionism is being equated with Americanism. Zionist agents like Nathan Sharansky crafted the overblown and specious rhetoric of Bush's second inaugural speech that committed the US to advancing the Zionist agenda using force.

Apart from the law on those involved in pogroms, the Zionists practiced genocide against the ethnic groups inhabiting Russia, and they did so by accusing people of counter-revolutionary activities, sabotage, and so on, irrespective of whether or not the people in question really had conducted such activities. It was standard practice merely to put them against the wall to be shot."