Rejection of the Feminine is Rooted in the Occult 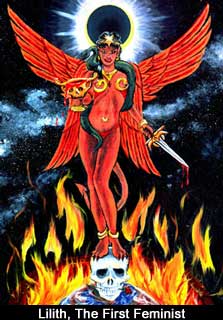 Lilith's refusal to lie beneath Adam is tantamount to the earth refusing to receive a seed. There is nothing inferior or "unequal" about this, no matter what this text has Adam say. It is part of the yin-yang, the active-passive, masculine-feminine dance that is at the heart of nature.

Man serves God. Woman serves family. In this way both are useful and their lives have meaning.

But the Gnostic/Kabalistic tradition wishes to overthrow God and nature and substitute the rule of (some) men. The New World Order is the culmination of this satanic tradition.

Some day our educators and politicians will be held accountable for turning impressionable girls into lesbians and ruining their lives. They teach them a hate-filled Feminist dogma that heterosexuality is a "social construct," males are violent predators, and sex with a man is rape.

Millions of gullible girls are falling into a diabolical trap intended to make them pursue careers instead of families. As I have said, the purpose is to depopulate and destabilize society by destroying its fundamental building block, the family.

I am not a fan of Dennis Prager , a Zionist propagandist, but I credit him for a perceptive interview with a young women Anna Montrose who described how university and the media made her bisexual. It is based on an article in the McGill Daily in which she declared:

"It's hard to go through four years of a Humanities B.A. reading Foucault and Butler and watching 'The L Word' and keep your rigid heterosexuality intact. I don't know when it happened exactly, but it seems I no longer have the easy certainty of pinning my sexual desire to one gender and never the other."

(Michel Foucault is a major French "post-modern" philosopher; Judith Butler is a prominent "gender theorist" at UC Berkeley; and "The L-Word" is a popular TV drama about "glamorous" lesbians.)

Read her interview and you will see she thinks men and women are interchangeable and marriage is mostly a tax deduction. She is unfit for marriage and motherhood. Unfortunately, she is becoming the rule rather than the exception.

Paradoxically, when females reject the male, they usurp the masculine role and abandon the feminine one.

Innocents like Anna Montrose are the victims of Feminism, which has roots in the occult Kabalistic and Gnostic tradition that displaces God and rejects marriage and family as impediments to free sex and occult control of society. (Kabala and Gnosticism are the basis of Freemasonry, in turn the basis of modern Liberalism, Communism, Socialism, Fascism, Zionism and Feminism.)

According to this occult tradition, Lilith was Adam's first wife, the archetype feminist that every man marries and then divorces.

Lilith and Adam argued constantly because Lilith refused to be under him in the act of love. saying they were "equal." This is from "The Story of Lilith" which dates from the between the 8th and 10th Centuries A.D:

Lilith responded, 'We are equal to each other inasmuch as we were both created from the earth.' But they would not listen to one another. When Lilith saw this, she pronounced the Ineffable Name and flew away into the air. Adam stood in prayer before his Creator: 'Sovereign of the universe!' he said, 'the woman you gave me has run away.'

Lilith's refusal to lie beneath Adam is tantamount to the earth refusing to receive a seed. There is nothing inferior or "unequal" about this, no matter what this text has Adam say. It is part of the yin-yang, the active-passive, masculine-feminine dance that is at the heart of nature.

Man serves God. Woman serves family. In this way both are useful and their lives have meaning.

But the Gnostic/Kabalistic tradition wishes to overthrow God and nature and substitute the rule of (some) men. The New World Order is the culmination of this satanic tradition.

That is why the Ten Commandments are carted out of courthouses and replaced with "human rights" which are not God given, but are defined and applied selectively.

That is why our young women are raised to be dysfunctional and useless; why young men are not taught to serve God (Truth, Love) and give women a noble purpose.

LOVE HAS TO BE EARNED

The occult roots of modern culture also explain the confusing mystical haze that surrounds romantic love. The notion that men get their meaning from love and marriage is very confusing and wrong. It is also feminine. Men get their confidence from their work.

The notion that we are divine and can love the "God within" our mate is a form of idolatry. Most of us are closer to insects than to God.

I would replace the word "love"with two words: "trust and respect." This concept is more realistic and understandable. True love develops over a period of years and is based on trust and respect.

Naturally, we must begin by "earning" our own respect by living up to personal ideals and achieving our goals. This is the source of self-confidence and attraction.

Then a man must "earn" a woman's trust and respect through slow and patient courtship. For a woman, love is an act of self-surrender, which renders her vulnerable. Her happiness depends on her careful choice of husband.

I have a hunch that the most satisfying aspect of sex is not physical but emotional: total possession for the man, and total surrender for the woman. This depends on earning trust so a woman can let down her defences. See my "The Power of Sexual Surrender."

The popular misconception that we are entitled to love is another aspect of our occulture, and is partly responsible for our arrested development. Instead of becoming more worthy, more useful, we seek the magical "someone" who will love us just as we are.

WHAT WE CALL LOVE

What we call love is usually sexual infatuation. Young women behave as if sex appeal is all they need, and young men tend to confirm this error. The movies show men going gaga over women who have very little to offer, other than being pretty and quirky.

That's good for ten minutes, what about the rest of life? In the past, women had practical skills as wives and mothers. They learned to cook and sew and make the home beautiful and inviting. They became cultured and mastered a musical instrument. They knew about child rearing.

My wife who is Mexican still has something of the Old World. We met five years ago over the Internet. She sent me a link which she said was a gift. When I opened it, I saw she had designed a great new web site for my book, A Long Way to go for Date .

Love at first web site, her gesture told me that she was prepared to be useful, to help me.

A woman helping a man! What a strange concept these days when an ancient satanic conspiracy nears culmination.

Note: I am indebted to David Livingstone, the brilliant author of The Dying God: The Hidden History of Western Civilization, for bringing The Story of Lilith and the relationship of Feminism to Kabala to my attention.
--------------