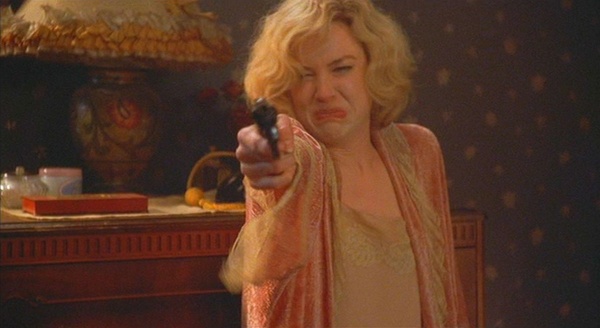 "Don't shoot, I am alone," a husband pleads after his wife catches him in bed with two naked women in the movie Chicago. "Believe what I tell you, not what you see."

Jewish Cabalism is based on the premise that truth is defined by their vanity, perversity, and self-interest. There is no objective Truth. They are God. Increasingly, due to their dominance over news/ entertainment, our world reflects this Cabalist Jewish (Communist) solipsism.

The Masonic Jewish media was totally discredited during the 2016 election campaign. But instead of reforming, they've doubled down again and again.

Cabalism is Satanism and Satanism inverts truth and falsehood (as well as good and evil.) The 2002 Best Picture Chicago was an inside joke where Jews celebrated their own chutzpah and chicanery over the dimwitted goyim.

"Don't shoot, I am alone," a husband pleads with his wife after she catches him in bed with two naked women.

"But I can see two women," she objects.

"Don't believe what you see," he instructs her. "Believe what I tell you."

The wife shoots her husband in this scene from the 2002 movie musical "Chicago". But the show is dedicated to the cynical premise that the public is not so astute.

"Chicago" was written by the author of "Cabaret", Fred Ebb. Where the mantra of "Cabaret" is "money makes the world go round," the sequel proclaims power turns on deception, connections and media control.

It is significant that when many Americans suspect Zionists of doing 9-11, a movie that celebrates Jewish duplicity received 13 Oscar nominations and won "Best Picture" and six other Oscars.

"Chicago" epitomizes the bogus Cabalist religion of secular humanism (Satanism) that morality and truth are man-made and relative, rather than Divine and absolute. This is the cause of our cultural and moral malaise.

It raises questions about the relationship of organized Jewry to the elite, and Jews to their own religion. According to Irving Kristol, Jews in America "proudly identify themselves as Jews but their religion, for the most part, is only Jewish in its externals. At the core, it is secular humanist." (The Future of American Jewry)

"Chicago" is set on Death Row in Chicago's Women's Jail, where women who killed cheating husbands brazenly proclaim, "He had it coming."

"Roxie Hart," wife of Amos, murdered her lover because he promised to advance her singing career but dumped her instead. 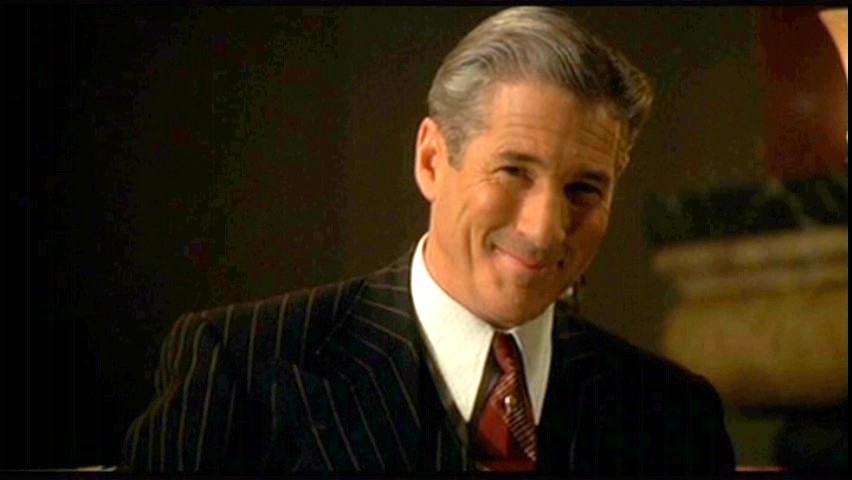 Flynn's practice is to invent a crowd-pleasing story about his client and create media hysteria. There is an eerie scene where Flynn is a giant puppeteer controlling dozens of puppet-reporters. Another evocative scene shows him as a ventriloquist voicing Roxie Hart's words. (Imagine Hillary on his lap.) Finally, there are the winks and Masonic hand signals he gives the judge suggesting corruption.

Flynn tells Roxie: "You got nothing to worry about. It's all a circus, kid. A three-ring circus. This trial, the whole world all show business. But kid you're working with a star, the biggest!

Give 'em the old razzle-dazzle...
What if your hinges are all rusting?
What if, in fact, you're just disgusting?
Razzle dazzle 'em.
And they'll never catch wise!
How can they hear the truth above the roar?
Throw 'em a fake and a finagle
They'll never know you're just a bagel...
They let ya get away with murder..."

To drive home the point, another inmate, a devout Hungarian Catholic woman does not have the money or the "smarts" to hire Billy Flynn. We see her praying to Jesus Christ but Jesus does not help her. She goes to the gallows. We see her swing. We see them take her coffin away. The Christian is a loser.

The Jury is out. The newspapers have printed two batches with headlines GUILTY and INNOCENT. The audience knows Roxie is guilty. She killed a man with a wife and five small children just because he had her without paying the price.

If Hollywood were doing what it should, Roxie would be found guilty. The world would be portrayed as a place where Billy Flynn's chicanery does not prevail, where you can't "get away with murder."

But Roxie is found innocent, of course. In Cabalism, this is the way the world works. Anything else would be preachy. But, isn't this preaching too? Doesn't religion create the world we live in? This movie preaches that moral corruption (Satanism) is trendy, fun and sexy.

REALITY IS WHATEVER WE SAY IT IS

Roxie Hart and her partner, Velma Kelly, another of Flynn's satisfied clients, take to the stage. "Thank you for your belief in our innocence," they say in the Finale. "You know, a lot of people have lost faith in America. And for what America stands for. But we are the living examples of what a wonderful country this is."

Brazen, n'est ce pas? It's as if, in their view, corruption and exploitation are what America is "great" for.

It's both logical and frightening that the mass media is controlled by people who believe in creating a false and perverted reality.

Is the world "a three-ring circus" because the Jewish God is Lucifer?

Reading the fan reviews on Rotten Tomatoes, other gripes stand out.

"It's corny, stupid and politically correct," wrote one.

"So caught up in being diverse and political, it forgets to tell a coherent and compelling story," wrote another.

Empire's Helen O'Hara explains: "There were many more characters in this installment that weren't white men, and that has been a shift that some fans have found unconsciously upsetting or alienating. They've felt excluded by that.

"And some men have openly complained that there are too many girls running around the Star Wars universe, which I personally think is crazy."

I wonder when the "sociology social programmers" will realize they are fighting a billion-year-old archetypal human instinct pattern which made "the hero's journey" in the original Star Wars so compelling and attractive - knight rescues the fair maiden from the dragon. What is it now Henry - incompetent knight has a nervous breakdown, fair maiden ropes down castle wall and carries him to safety?

We’re an empire now, and when we act, we create our own reality. And while you’re studying that reality – judiciously, as you will – we’ll act again, creating other new realities, which you can study too, and that’s how things will sort out. We’re history’s actors . . . and you, all of you, will be left to just study what we do.” (Ron Suskind, NYTimes Magazine, Oct. 17, 2004). Said by Karl Rove.

Re: "We see her praying to Jesus Christ but Jesus does not help her. " (Maybe he did...)

I wonder if the powers that be (e.g., the Israeli 8200 program) leave you alone because in the world of cyberwarfare and control, your email activity acts as a honeypot in identifying people with certain opinions.

I am too old to care. I was a philosemite (e.g., I was an ardent ROFTER) that became a little red-pilled, that's all. I simply gave up my naivete--mainly because of the animosity that workplace Jews had for me--much to my shock.

I have no hatred of Jews. They need their ethnostate and so do Europeans--and so does everyone else, actually. If some really want to persecute me in the future for this reason (and I do not know that that is the case)--so be it. More Heaven for me. I have enough on my plate learning how to deal with the "persecution" for being a government whistleblower.

Even though I've never seen it, and don't plan to, everything is spot on, but I do take exception to this:
The God of the Old Testament is capricious, xenophobic and often barbaric. He demands human sacrifices and promises to slaughter Israel's enemies. He is sometimes mystical and good but often mysterious and unknowable.

That's what I used to think as a "baby Christian," early in my walk, but after growing in faith and the reading of God's word, especially the OT, the narrative becomes more clear. There are two forces at work, and God wants us to search and know Him above all; he grew tired of sacrifices early on. Satan created entire races of people that had to be destroyed. His own people turned against Him. His New Covenant seems a given, but it's a fulfillment of the old. Same God, always.

OK, but on the topic of the Hollywood narrative, another series from HBO summed it up so well that I had to stop watching it in the 3rd or 4th season, "Boardwalk Empire." The villain is a white male Christian fed who murders a Jew fed by drowning him while baptizing in the river while a black congregation watches. They later identify him as the culprit. The bootleggers and corrupt politicians are the good guys, except for one who is seen reading a copy of "The International Jew" Henry Ford magazine (played by Dabney Coleman).

I really liked some aspects of the show, but there's only so much I could take.