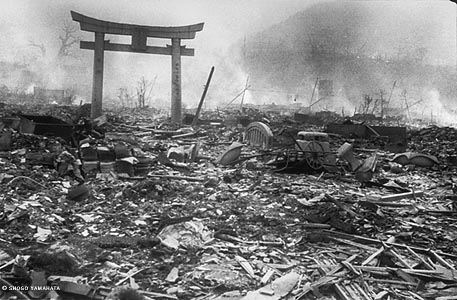 The rationale behind the destruction of Hiroshima and Nagasaki 60 years ago is driving the anticipated nuclear strike on an American city by "Muslim terrorists."

The occult international banking cartel is behind these attacks, past and future. The purpose is to inspire fear and justify repression, war, debt and "world government."

A half million Japanese civilians were irradiated not to save American lives or impress Soviet Russia. They were slaughtered to force humanity to accept the Cold War, a nuclear arms race that cost five trillion dollars and accomplished nothing. Now that the Cold War has run its course, the bankers have to establish the new "War on Terror" potentially by nuking Americans.

There must always be an external enemy so people don't realize they are being fleeced by the bankers who appoint the leaders, control the media and create the money.

With World War Two winding down, the bankers needed the "Cold War."

The bankers ignored Japanese attempts to surrender because they needed to demonstrate the devastating effect of the atomic bomb. "Our entire postwar program depends on terrifying the world with the atomic bomb," Secretary of State, Edward Stettinius Jr., the son of a JP Morgan partner, said. "We are hoping for a million [dead] tally in Japan. But if they surrender, we won't have anything."

My source here is Eustace Mullin's excellent on line essay, "The Secret History of the Atomic Bomb." Mullins, a former Library of Congress researcher, is one of a handful of courageous historians the bankers don't own. I urge you to read his 14-page essay in full.

According to Mullins, President Truman, whose only real job before Senator had been Masonic organizer in Missouri, did not make the fatal decision alone. A committee led by James F. Byrnes, Bernard Baruch's puppet, instructed him. Baruch was the Rothschild's principal agent in the USA and a Presidential "advisor" spanning the era from Woodrow Wilson to JFK.

Baruch, who was chairman of the Atomic Energy Commission, spearheaded the "Manhattan Project" named for Baruch's home turf. He chose life-long Communist Robert Oppenheimer to be Research Director. It was very much the bankers' bomb.

Mullins quotes a Japanese doctor: "My eyes were ready to overflow with tears. I spoke to myself and bit my lip so that I would not cry. If I had cried, I would have lost my courage to keep standing and working, treating dying victims of Hiroshima."

When the Air Force dropped the atomic bomb on Nagasaki, the principal target was a Catholic church: "The roof and masonry of the Catholic cathedral fell on the kneeling worshippers. All of them died."

Back in the United States the news of the bombing of Hiroshima was greeted with a mixture of relief, pride, joy, shock and sadness. Oppenheimer's colleague remembers the shouts of joy: "Hiroshima has been destroyed! Many of my friends were rushing to the telephone to book tables at the La Fonda Hotel in Santa Fe in order to celebrate. Oppenheimer walked around like a prize-fighter, clasping his hands together above his head as he came to the podium."

The bankers serve a diabolical power whose goal is to thwart and enslave humanity. The Cold War served to brutalize a whole generation.

Mullins writes: "In the United States, the schools held daily bomb drills, with the children hiding under their desks. No one told them that thousands of schools children in Hiroshima had been incinerated in their classrooms; the desks offered no protection against nuclear weapons. The moral effect on the children was devastating. If they were to be vaporized in the next ten seconds, there seemed little reason to study, marry and have children, or prepare for a steady job. This demoralization through the nuclear weapons program is the undisclosed reason for the decline in public morality."

Now child-like Americans may pay the price for their indifference to the fate of the Japanese and failure to punish the perpetrators who may be preparing to do it all over again. This time, the victims won't be strange-looking people thousands of miles away.

Sept 11 was the shot across the bow. The most privileged people on earth, Americans were murdered and humiliated in broad daylight. No one was held responsible for allowing this to happen, a sure sign that their own "leaders" were complicit.

Are Americans going to be disinherited and destroyed? The difference between them and Iraqi insurgents: the Iraqis know they have been invaded by an alien and evil power.

Related: My "Tales of Mind Control and World Tyranny"

The Eustace Mullins piece misses an important point, namely, why at all the financial sector insisted on dropping the bomb:

It was to stop Stalin from the invasion of Japan. Stalin made this plan after Jalta conference, this is known from sovjet archives that were published in 1993 by historian Boris Slavinsky but then buried again quickly.

And why was it vital for big finance to invade Japan ?

1944 saw Bretton Woods. The dollar was again backed, at least theoretical, to gold, to prepare the dollar hegemony in the post war scenario.

The only problem was, the US Bankers did not have enough gold then.

Japan came in handy: The Japanese had robbed gold worth several 100 billion dollars in Asia, that was now just waiting to be taken by those that could manage to invade Japan.

When the bomb was dropped, Stalin immediatly cancelled his invasion plans, and the US could take the gold undisturbed and secretly.

George Marshall stated in an interview with historian Forest C. Pogue, that dropping the bombs was about saving "the lives of hundred thousands of americans" (the standard explanation) and moreover "several 100 billion dollars" (not so standard).

dear henry
we have been seeing documentaries about hiroshima and nagasaki and it made
me wonder.. how can people live with themselves when they have brought such
devastation on other humans... albeit the so called enemy.. they are all
someones mothers brothers fathers sisters children... and the american
public rejoices when they see all this happening... hahhahaa down with the
BAD PEOPLE.....they think...
and on the other hand we see the oprah winfrey show where all the women are
smiles all around... so oblivious to what their great nation is doing or has
done to the rest of the world... it is so incongrous... life seems nothing
but a big ''satan rules'' jubilee...and these womens lives are all nothing
but materialism .. you should see how their joy knows no bounds when they
get even books .. probably something they will never ever read anyway.. but
hey it is a commodity and it cost something.... very sad how their minds are
so numbed ...

Dear Henry:
This particular commentary hit me square in the gut.
My Uncle an Army Engineer was sent to the Philipines during WW11, and killed on that Island in the Baatan Death March.
My ancestors on both sides of my family, came from Germany to escape Hitler and his lunatic evil ideas.

Reading your commentary brought home to mind the evils and lunacy of the entire NWO and its agenda. The revision of history is especially repugnant because it has closed the eyes of Americans to vast amounts of evil being perpetrated in their name.
People are so completely ignorant in this country as to what is happening around them.
I do not believe their eyes will be opened until they wake up one day and find themselves devoid
of all freedom and property.

I have said before, that there is a great deception being carried out by the elite bankers, Masons, etc., and the only possible
way out is recourse to God's Plan of salvation for all.

Within a tiny time-frame Japan could have been isolated and driven to surrender. The Imperial Navy ceased to exist after Midway. The food supply was almost gone. Etc. Why? You hit the nail on the head. Meanwhile, the "Cold War" con-game: Yockey had all this sized up and demolished in 1946 and wrote about it in 1947 (IMPERIUM, 1948, and other works, notably DER FEIND EUROPAS, 1953). The Brits (who else?) were prime movers (as spokes-jackels of "the West") against the "threat from the East," and like drivel. Russia was nothing more than a big rubber bear being pumped up by "the West" in order to further terrorize Europe and push the US military-industrial economy into high gear. Even in the 1990's you had "retired" British Intelligence operative John A. Clarke (John Coleman) railing against "the East" and pushing for a more powerful NATO as salvation-device for his beloved "West" and, of course, the City. You mention Mullins. Appreciated. He's certainly paid his dues over the years. Mullins knew Yockey and many of FPY's nameless supporters in the 1950's.

We are a traumatized nation, and I know now that the Nuclear war scenario Russian scare of 1962 was a hoax.

Kennedy's Secretary of Defense, Robert McNamara wrote in his 1995 memoir, that KGB documents obtained after the fall of the Soviet Union revealed that the missiles in Cuba were not armed or fully functional. Kruschev was bluffing.

So McNamara blames the hoax on the Russians......a man from an era when American politicians blamed all of our problems on Moscow and Communism.

But somebody was damn well prepared to terrorize the public in a massive and blanket campaign unsurpassed until the new 'Fatherland Security' scam.

After the Cuban Missile Crisis was over, we drew a breath. Then Kennedy was assassinated a few weeks before Thanksgiving, and we were all sent home from school for that. The adults were standing out in the middle of our street talking about it late into the evening. They were traumatized.

One year almost to the day after, Ed Sullivan introduced the Beatles to the US public. And we little kids, believing that we would never live past thirty (due to the death sentence of inevitable nuclear holocaust), were quite ready to embrace the new philosophy of "live for now" "don't plan for the future because there isn't any" and "tune in, turn on, drop out".

Everyone my age that I know, who did tune in, turn on, and drop out, agrees with me that it all started back in 1962, when our age group was convinced that we were all going to die in that big "fake dawn".