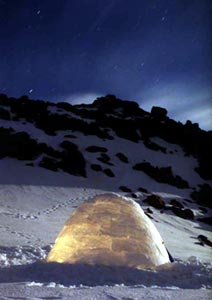 (Originally posted Jan 7, 2006 this is appropriate for the season.)

This isn't about storing silver coins or canned food or getting an AK-47.

It's about saving your soul not your skin. It's about the tendency to obsess on the New World Order, get depressed and become unbearable.

The situation is depressing. A satanic cult controls the credit of the world and rules through myriad proxies. It is determined to destroy civilization and institute an Orwellian police state.

You spend hours every day addictively watching for new developments. Your face is pressed up against the store window of the world.

You are "externalized." You can't go into the kitchen without switching on the radio.

You try to squeeze your sustenance from the world. But much of what you imbibe is poisonous: depravity, corruption, duplicity and tragedy. (Is that the point of the mass media? To demoralize and brutalize?)

Mankind is in the grip of a diabolical force that constantly strives to legitimize itself through deception. You can't overcome this demon. But you still control your personal life. Ultimately, the battle is for the soul of humanity. Why not begin by defending your soul?

This means erecting a wall between the soul, and the world, and establishing a balance between the sacred and the profane. You need to shut out the world (the profane) for set periods of time and focus on what inspires you. That means turning off the TV, Internet and media in general.

Just as you nourish your body with food, you feed your soul with wholesome thoughts, sights and sounds. Your soul reaches out for beauty, grace, harmony, truth and righteousness. You become what you think about.

What lifts your spirit? It might be a long walk, nature, music, book, hobby, sport, or music. It might be time with your family or friends. It might be the Bible, religious writing or meditation.

"Do what you love," Henry David Thoreau said. "Know your own bone; gnaw at it, bury it, unearth it, and gnaw at it still."

You agree with the mystics who say happiness is within. It involves the possession of your self ( i.e. your soul,) and not wanting anything else. By looking outside your self, you displace your soul and become the thing you seek. This is the source of addictive behavior and unhappiness.

The occult elite controls us with sex and money- the North-South of the mind. The courtship stage is a period when sexual feelings are strong so two people will bond and start a family. Sex/romance was not meant to become a permanent preoccupation and panacea. The cult uses it to distract and degrade us while it creates a police state (using the "War on Terror" as a ruse.)

The same is true of money. The stock market is a giant casino addicting millions. The central banking cult has unlimited funds. To make us feel good, (while it trashes civil rights and wages senseless war) it makes the market go up. To fleece us, it crashes the market. Gold is just a shiny stone. Don't be a dupe.

The diabolical powers have been here for a long time. You have discovered their existence only because they signaled the beginning of their endgame on Sept. 11.

Don't let them stunt or degrade you by obsessing on their iniquity. Restore balance by attuning yourself to higher things. Be an outpost of happiness.
----

Continued as "Making Our Own Heaven"

Dear Henry, thank you for this message. You wrote:

"What lifts your spirit? .. happiness is within. It involves the possession of your self ( i.e. your soul,) and not wanting anything else. By looking outside your self, you displace your soul and become the thing you seek. "

.. and it is all about distraction! From what? From real life. In my opinion life is about
- staying alive,
- passing life on to our offspring.

Everything else serves these main purposes, even distraction and entertainment. Personally I can�t see any higher goals. In fact we have to give it all to get there, and many humans today are not willing to take care of themselves or any offspring. Consequently they die early oder they die out or they leave disfunctional offspring.

What is wrong? Is it a general lack of devotion - as opposed to distraction? A loss of focus?

The sinister people you mention take advantage of this mindset, but I doubt that they make it. They might have the role of the parasites which eat up the weak. That is how nature operates. We all live in the frame of the law of nature (god) and we better accept the path that is created for us.

This was probably the best essay you have ever
written. I have read all of your little blurbs, but this one really crystallized everything in a nutshell.

Everyone is miserable because they are controlled by the wicked men and women who control the world. We need to focus on God, not the material. The enemy wants us to care about what is happening in this life.

But this is not the end. Only recently has mankind
thought that the present is all there is to life. We are eternal beings. The ruse is to make us believe it is not. Mankind is more than a pile of flesh and bones.

Just wanted to let you know that I really enjoy your writings. Your knowledge of "the way things really are" is so rare where I live, but it's good to find someone online who feels the same way as I do. Keep up the excellent articles, they are wonderful!

How did you come to know so much about these things?
--

We just have to trust our own instincts. They come from God. Group-think comes from the other place.

thank you henry for speaking from the heart. You are right and we must step back and refocus to stay in tune with what's truly important. We must
also remember that to stay focused and keep sane, we must be able to interpret world events and NWO machinations along prophetic lines which
were recorded long ago by Yahweh's prophets. To understand what 9-11 really was, you must visit the website www.remnantofyhwh.com To fulfill Philippians 4:8 as you suggested, there must be the hope that the New World Order will be defeated, and the Kingdom of peace promised
long ago will become reality. The kings of the earth who are under the Whore of Babylon's control will be defeated, but the Seals of Judgment opened on 9-11 and World War III will soon be upon us all. Trust in Yahweh and
keep His commands for this is the whole duty of man" (Eccl.12:13). thank you for the words of wisdom! shalom,
Pastor Mark
Two Witness Ministries

Inspirational words. Thank you. Forwarded to all of my highly aware friends, who become at times enthralled with contemplating the designs of their moral lessers, to the point of forgetting to create their own designs, and design their own happiness. And it is so
easy to do.
Interesting how nearly all of my "conspiracy" pals are starting to become bored with inaction of observing what is wrong, and are moving rapidly in the direction of asking, "what would be right?", and "how do we start it now in our own lives?". And there IS a lot of very creative juice starting to flow in America, now that the hundreth monkey has gotten that idea....more than we know, I keep finding. Thanks again Henry, for the great wise words.

I am writing to you regarding your article posted on rense.com entitled "Surviving The New World Order" on December 24th 2006, originally authored in January of this year.

This year has been particularly difficult, and the Christmas season has been no exception. To watch your country's government (and mine) call for more troops in Iraq and Afghanistan on the news, to read the reports warning about financial problems on the horizon, and to hear that the things that are most terrible - war, poverty and hate - will become substantially worse with the coming year has taxed my very core until feel that I surely cannot cope any more. It is at this time a message of hope is most welcome; a message that your article delivers perfectly. Sitting among another touching article, "The Christmas Truce - When Men Said No to War", I found your article about how to cope with these events that are deeply chilling by resorting to one's inner sanctum - the soul.

After reading your work, my spirits have turned around. I will spend the remaining holiday looking at what is left of good in this world and remembering Christ's message of hope. As sentimental as this sounds, I have you to thank for this favor. If you take anything from my short email, I want you to know that I am sincerely thankful that you took the time to write that article. I offer my praise and encouragement to you. Thank you, sir!

I wish you and your loved ones a Merry Christmas and best wishes for the new year,

Your article contains several excellent suggestions and sentiments.
When we discover the horrible truth about who runs this world, what their agenda is, and about the darkness in our own hearts, there are
good reasons to become despondent. If we receive the blessing of God's Amazing Grace, we learn to see all these things through a new set of eyes and in the context of humanity's history and purpose (God's purpose). All of a sudden, not only can we really SEE, but the burden of anxiety about where the world and we are ultimately headed, evaporates and is transformed into expectant faith, hope and joy.

Through the blood and sacrifice of Christ, we are then truly born again and empowered to resist evil and the devil with all our strength, while enjoying the abundance of God's blessings - of which there are many, if we will only pay attention.

This Christmas season, when we celebrate the birth of Christ, offers renewed hope and the wonderful offer of personal salvation to every
person who decides to seek Him! No matter how bad things get, the Light will be victorious in the End :)

Have a Merry Christmas!