Time to Be Men Again 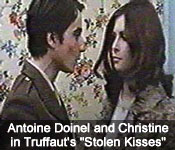 "How the French have fallen! I recently watched Truffaut's 1968 classic "Stolen Kisses" and marvelled at Antoine Doinel's girlfriend Christine. She is so irresistibly pert, gracious and pretty."
by Henry Makow Ph.D.
"Modern men see women as 'castrating, vengeful, power-hungry and obsessed by men's sexual performance,'" a recent study by the French Edition of Elle Magazine concluded.

The study based on four 12-man focus groups found that Frenchmen believe that women are out of control. They feel belittled by the constant overvaluation of women and dazed by demands to adopt feminine traits yet somehow remain virile.

The 25-35 age group felt that women "consume men and abuse them sexually" while the magazine characterized the 20-25 age group as "subjugated and feminized."

How the French have fallen! I recently watched Truffaut's 1968 classic "Stolen Kisses" and marvelled at Antoine Doinel's girlfriend Christine. She is so irresistibly pert, gracious and pretty. French women were among the most stylish and feminine in the world, accounting for the country's reputation as a love Mecca.

Of course the complaint of Frenchmen is universal. I received this e-mail recently from a young American male who wonders if women aren't becoming "sociopathic."

"They tend to not give a rip about others and 'break it off' rather suddenly," he wrote. "They just laugh and say 'That's what I do.'"

I replied to this young man:

"Tune out all the mad women. The key is not to barter your power for love. No compromises. Keep looking until you find a woman who obeys you and reward her with loyalty and love."

He replied: "Gee, I never thought of that. Thanks!"

It's time for men to be men again. It's time to serve notice to women that if they want a relationship with a man, if they want a family, then they must learn to obey their husbands. Otherwise, they are welcome to play roommates with "liberated men" or become lesbians.

The essential difference between masculine and feminine can be put in a nutshell: woman exchanges her power for a man's love. This is what makes her feminine.

When men barter their power for love, they become women. Men trade love for power.

The fatal mistake of the men's movement is accepting Feminism's bogus assumptions and complaining that the women aren't treating them as "equals."

Whether women realize it or not, they cannot love men whom they can control.

WELCOME TO THE NEW WORLD ORDER

Tens of millions of women and men have been betrayed by Feminism. They do not realize what Feminism is. In her book, "School of Darkness" (1954) Bella Dodd who was a leader of the American Communist Party defined the long-range Communist program: "The bourgeois family as a social unit was to be made obsolete." (153)

She also wrote that the Communist Party wished to "create a new type of human being that would conform to the world they confidently expected to control." (162)

Bella Dodd confirms that Communism was created and financed by a clique of bankers and their allies to bring about world domination. The appeal to equality and social justice was a fraud. Feminism was created by Communists to destroy the family and create neutered dysfunctional people they could control. It was spread by media, government and education systems, which the clique largely directs.

Recently 20 high school graduates toured a science department at the local university. Nineteen of the students were women. The Chairman of the Department raised the problem at a faculty meeting.

"Seventy per cent of our students are female," the Chairman said. "The males in my department are mostly foreign students. We need an affirmative action program for white males."

The Chairman was met with stunned silence from the rest of the committee. The proposal was not even discussed.

Don't kid yourself. This is a deliberate policy of homosexual social engineering that is authoritarian and sinister. It was never put to a vote. It is dictated by Rockefeller-funded think tanks to state and provincial governments to universities.

Feminists said they wanted equality but this was a typical Communist ruse. The hidden agenda is to destroy the nuclear family. Women who devote their prime years to getting a career will find it harder to become wives and mothers later. Men who are shut out of universities will not become breadwinners and family leaders. The discrimination against white males is also intended to undermine America's European character.

Two years ago, there was a scandal at this school (the University of Winnipeg) when high school girls attending a summer program on "women in the arts" were shown lesbian videos and told they didn't need males. They could satisfy themselves using vegetables.

I walk the halls and see bored young women in white lab coats staring distractedly out the door wondering why they are memorizing formulae instead of obeying their natural instincts and having children. Like millions of people duped by Communists, they will be high and dry when there is a Depression and they have neither careers nor families.

People stumble over the word "obey." The equation is power for love. A woman agrees to obey a man when she becomes his wife. She thus becomes part of him and is included in his sense of self. Naturally he wants to nurture and see her happy. I would consider my marriage a failure if my wife weren't happy.

The knowledge of how to be a man has been suppressed by the clique. Growing up, I had no idea how to relate to women or how to become a man. This standard has been the same for centuries: A man prepares himself to provide for a wife and children and to give them physical and spiritual leadership.

Women want love. Men want power. Marriage is the exchange of the two. If either fails to keep the bargain, the marriage is over.

Women are victims of an insidious lesbian campaign to rob them of their femininity and ability to love. The clique does not have their welfare at heart. Their teachers, media figures, politicians are either traitors or dupes. They are part of a conspiracy to centralize power in the hands of the super rich. This is what "globalization" is about. This is behind the war in Iraq.

The clique can assert control only by dividing, destabilizing and depopulating society. It's time to re-establish the natural heterosexual balance. It's time for the sexes to come together, for men to be men and women to be women.