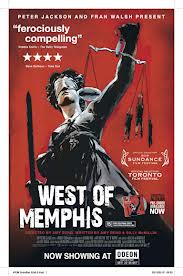 A new documentary beats the drum for Satanist child killers.
As usual, Liberals shill for Satanism. Two docs released, and a feature film in the works..


"The myopic and uniform opinion about West of Memphis from critics at the nations top newspapers is astonishing. Every major newspaper critic parrots the falsehood that the West Memphis Three were unjustly convicted. "

On December 25th, 2012 supporters of the West Memphis Three released a new documentary about the ritual murders of three young boys on the evening of May 5th, 1993 in West Memphis, Arkansas.  Three teenagers, Damien Echols, Jason Baldwin and Jessie Miskelley were arrested and convicted of the heinous crime in 1994. After a concerted public effort by a well-funded group of supporters, the three convicted killers were released from prison in 2011.

[In 1996, a three-part documentary film, Paradise Lost: The Child Murders at Robin Hood Hills, Paradise Lost 2: Revelations, and Paradise Lost 3: Purgatory, directed by Joe Berlinger and Bruce Sinofsky  were strongly critical of the verdict. A feature film is in production for release in time for Halloween 2013.]

Damien Echols, the central figure in the murders, maintains his innocence in his recent book Life After Death and in the latest (2012) movie West of Memphis.  Funded by Lord of the Rings filmmaker Peter Jackson and directed by Amy Berg, the film West of Memphis lists Damien Echols as a co-producer.  Peter Jackson boasted about the money he spent hiring investigators in support of the convicted killers.1

Of Jackson, David Bay wrote the following:  "When I viewed The Lord of the Rings, I was filled almost immediately with the most unbelievable sense of deep, pervasive Satanism. Almost immediately, I was filled with the greatest foreboding I have ever sensed, and throughout the movie, I felt a great, great power of evil emanating from the screen. This movie is far more Satanic and pure evil than Harry Potter."

The myopic and uniform opinion about West of Memphis from critics at the nations top newspapers is astonishing.2  Every one of the critics at the major newspapers parrot the falsehood that the West Memphis Three were unjustly convicted.  For example, Roger Ebert of the Chicago Sun-Times wrote: "Three young men spent 18 years in prison, one under a death sentence, for a horrifying triple murder they clearly did not commit."

However, one critic offered a truthful and telling opinion about the new evidence presented in West of Memphis by the defense team: "But the film also uncovers its own forensic and DNA evidence, thanks to investigators that Jackson and his partner, Fran Walsh, pay for."4 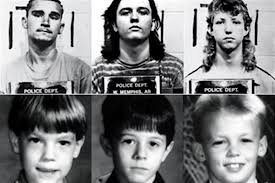 (The three perps and their child victims. Echols is top center.)
Damien Echols continually blamed the murders on someone else.  For a decade, the chief alternate suspect was John Mark Byers, the step father of Christopher Byers. For this documentary, Terry Hobbs, step father of victim Steven Branch, is the new perpetrator.

Why Hobbs agreed to be in this hatchet piece is beyond me.  After conducting a fishing expedition to target someone other than their client, the blank check defense team found a hair with DNA similar to Hobbs on one of the shoelaces used to tie up Michael Moore.  Terry Hobbs could not be excluded from the 1.5% of the population which matches the DNA on the hair.  In 2007, a defense team DNA analyst related his findings at a press conference in less than conclusive language: "In respect to the hair that was associated with the ligature, approximately 1.5% of the population at large could be the source of that hair. So, what we know now are two things. Terry Hobbs could be the source of that hair on the ligature."5

Rabid supporters of West Memphis Three innocence do not have a problem publicly espousing this DNA as a "match" for Terry Hobbs, which it clearly is not.  This miraculous new evidence, ginned up 15 years after the conviction of the West Memphis Three, is absurd.   Conveniently, Damien Echols and the writers of West of Memphis omitted the following statement by Echols recorded in 1996:

"I have no doubt that the actual killer is John Mark Byers. He had the knife with his son's blood on it, not to mention the fact that he could never keep his alibi straight. It was also proven in court that whoever killed those children had the skill of a surgeon and Byers was a jewel cutter. There was also testimony that his knife could have made the wounds on the children because the blade was consistent with the cut pattern."6

In 2009, after a $200,000 reward was offered to West Memphis residents advertised on a local billboard, three female family members rushed forward to provide affidavits to the defense stating they saw Hobbs with the three boys at 6:30 PM on the night of the murders.  The new "evidence" of witnesses miraculously recalled Hobbs with the boys sixteen years later, but couldn't remember to tell police the day after the murders when the West Memphis police went house to house asking for information.  The Arkansas Supreme Court refused to consider the three affidavits as evidence in 2009, but the information is in West of Memphis.

In a late addition to West of Memphis, two friends of Terry Hobbs' nephew Mike Hobbs, Jr., Cody Gott and Christian Sisk, were interviewed to discuss the "Hobbs Family Secret."  The secret is that Mike Hobbs told them that he heard from someone else that Terry Hobbs was involved in the murders.

This garbage evidence is inadmissible in any court of law in the U.S. not merely as hearsay, but double hearsay----the nephew heard from someone else who told him Hobbs was involved in the murder.  Moreover, the nephew Mike Hobbs denies ever making that statement and both Gott and Sisk are convicted felons. 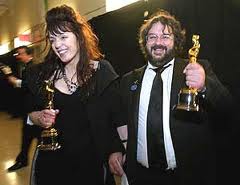 Omission is the greatest form of lie---George Orwell

West of Memphis omits important questions about the case. Why didn't the documentary discuss why Echols found it necessary to hire a lawyer and stop talking to police on May 13th, 1993?

If he were not involved in the murders, Damien Echols would want to provide information that would remove him from suspicion.

What about the failed alibis for all three defendants?  Why didn't Jason Baldwin even offer an alibi at trial?  Why didn't the film address the fact that the West Memphis Three were found guilty at law twice, once in 1994 and again in 2011?  Why not talk about Exhibit 500 and the disturbing pre-murder mental illness?  What about the continued obsession with the occult?

West of Memphis represents the shallowest type of film making.  Instead of presenting an objective analysis of the facts and evidence, the film JAMS biased opinions into the passive brains of unquestioning audiences.  At the national level, the film critics failed to even raise elementary questions or concerns about the veracity of the information.   Fortunately, the American public is not interested in the documentary---the box office gross since release totals a mere $117,000.00.
--

William Ramsey is the author of Abomination: Devil Worship and Deception in the West Memphis Murders available on Amazon and Kindle.   His first article on this subject for this site appears here.
www.occult911.com
www.occult911.wordpress.com
----
Related - ATLANTIC REVIEW DID FIND THIS MOVIE IRRESPONSIBLE
http://www.theatlantic.com/entertainment/archive/2013/02/the-unsettling-recklessness-of-peter-jacksons-west-of-memphis/273243/
--------- 1987 Child Murders Cover Up -http://archive.newsmax.com/articles/?a=1999/10/29/94119

Makow - Liberals are Unwitting Shills for Satanists and Communists  - https://henrymakow.com/liberals_are_shills_for_commun.html

2 http://www.rottentomatoes.com/m/west_of_memphis/reviews/#type=top_critics.  The word critic derives from the Greek kritikos---able to discern or judge.

Note from William Ramsey:
Damien Echols is not his given name---his birth name is Michael Wayne Hutchison.  He changed his name to Damien Echols in 1990 with his step-father's permission on, of all days, Halloween.

Children in America are clearly in danger. I know this from personal experience from when I was a child growing up in America. I recall, later as an adult, when politicians lowered the standards by which people were kept in mental institutions, due to overcrowding.

Noticeably, these people were seen wandering the streets. Subsequently, life became even less safe and it is the pattern we are dealing with. Worse and worse till all hell breaks loose. America is
surviving by a thread, and a frail thread at best. Hoping more are becoming increasingly prepared for what is to come.

Did you know a "major" motion picture drama will premier in theaters October 24th (7 days before Halloween) with James Hamrick playing the hero, Demian? Colin Firth plays a detective.
Produced by Paul Boardman and Richard Saperstein, each with a track record of producing Luciferian morality psychodramas with the highest production values and good box office.

The plot portrays Demian as a victim of Christian fundamentalist stupidity and "Satanic Panic" in the early 1990's.

The film is based on the book Devil's Knot which was written by the same writer for the Arkansas Times that wrote the expose of the 1987 "Boys on the Track" linked at the bottom of the article - Mara Leveritt. Why suddenly become a cheerleader for the West Memphis Three?

I found that in early 2012 she was granted a fellowship to write this book ($10,000), but that of course is nothing compared to the royalties she'll get from the film's box office.

The most baffling thing about this case is how tailor made the protagonist was for this role. The names seem like a joke. Who named their kid "Demian" in the Bible Belt in 1974? One of the victims' names was Michael Moore. Jason Baldwin sounded like a missing Baldwin brother of Alec, Daniel, Billy and Stephen Baldwin.

In this murder case, the defense lawyers have resurrected the good ol' redneck town meme of the "lynch mob" mentality. Jason had long hair and dressed 'goth' and it's implied 'more intelligent' than the locals so they imply he was framed for being 'different'. It's not the kind of defense that makes sense if you look at it closely.

This documentary is a reprise of a documentary that defended the three in 1999. A lot of Hollywood money and manpower has gone into this case. If they didn't promote and make a big deal of the case, I can cite you dozens of others just like it that never got more than a week's mention on local news. What makes this case so special?

Personally I think if Demian was framed, it was to protect REAL Satanists with local political connections. Not one of the cheerleaders for Jason and his droogs in the 1999 documentary suggested who did it, and they've shown no concern that the murder(s) are at large.